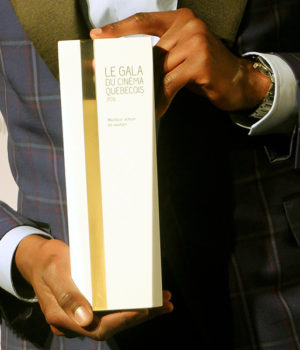 When I arrived at the theatre, once the city’s number one venue for Yiddish plays, I thought there might be an undercurrent of tension at the annual awards show. Broadcast live by Radio Canada, the gala both celebrated and promoted the year’s movie offerings. Once known as La soirée des Jutra, after the late moviemker Claude Jutra, the event underwent a rapid name change when a biography by Yves Lever claimed that Jutra, one of the most talented and celebrated directors in Quebec film history, sexually molested young boys.

Before his death in 1986, Jutra’s attraction to young men and boys was an open secret that no one worried about much. For one thing, before 2008, the Canadian age of consent was 14. But the revelation that he may have pursued children horrified even close friends and colleagues.

People like director Claude Fournier take the posthumous charges very seriously. Others, however, refuse to believe that the humanistic moviemaker, whose career was inextricably linked to Quebec’s search for identity, could have hurt little boys. Before the scandal erupted, Jutra’s life was already steeped in darkness. He jumped off the Jacques Cartier Bridge when he could no longer live with the confusion and memory loss of Alzheimer’s disease. (Some people are now speculating that he may have had other reasons to kill himself.)

Who knew what the mood would be the night of the Gala? A pall of sadness brought on by memories of the beloved Claude at his peak, his sad ending, and the shock that he could have been a pederast? Confrontations between those who want to erase the memory of him and his last defenders?

The issue is so serious in Quebec, a special committee has formed to find a new name for the award and the annual get-together. It includes a psychiatrist, a filmmaker, a retired judge, and an ethics expert. Meanwhile, provincial and municipal officials are discussing eliminating Jutra’s name from street signs and parks.

Despite the on-going drama, and what might have been in people’s hearts, the Gala du cinéma québécois played out as a normal awards show. Once co-hosts Pénélope McQuade and Stéphane Bellavance referred to the scandal and expressed their sympathy for the victims at the top of the show, it was business as usual. In fact, young filmmakers, technicians, and actors may have been only dimly aware of Jutra and signature pictures like Mon Oncle Antoine and Kamouraska, which starred Geneviève Bujold. I didn’t hear anybody even mention his name.

Perhaps out of nostalgia and a wistful need to connect with the past, voters handed six awards to 65-year-old Lea Pool’s La passion d’Augustine, about a feisty nun fighting the church establishment in the 1960’s. Pool’s movie took best film, director, lead actress (Céline Bonnier), and supporting actress (Diane Lavallée). As for best actor, veteran performer Gilbert Sicotte won for his role in Paul à Québec, a performance that rivals his beautifully nuanced work in 2011’s Le Vendeur.

“To come up on stage and be given this trophy, it is pretty surprising,” said the ebullient Exantus. “To be recognized for this role is really something. It was an extraordinary experience, especially since it was my first real experience on a film set.”

Another unconventional choice was the award for best screenplay, picked up by director Maxime Giroux and co-writer Alexandre Laferrière’s for their Félix et Meira, a restrained look at the burgeoning relationship between a Montreal Hasidic Jewish wife and a unhappy slacker from a wealthy québécois family.

If there was an undercurrent of tension at the gala, it was triggered by the recurrent complaint that the nominators favour often obscure auteur films that no one sees at the expense of more audience-pleasing efforts.

Maurie Alioff is a Contributing Editor based in Montréal. He is a film journalist, critic, screenwriter and media columnist. He has written for radio and television and taught screenwriting at Montreal’s Vanier College. A former editor for Cinema Canada and Take One Magazine, as well as other magazines, his articles have appeared in various publications including The New York Times.

Up Schitt’s Creek With a Paddle