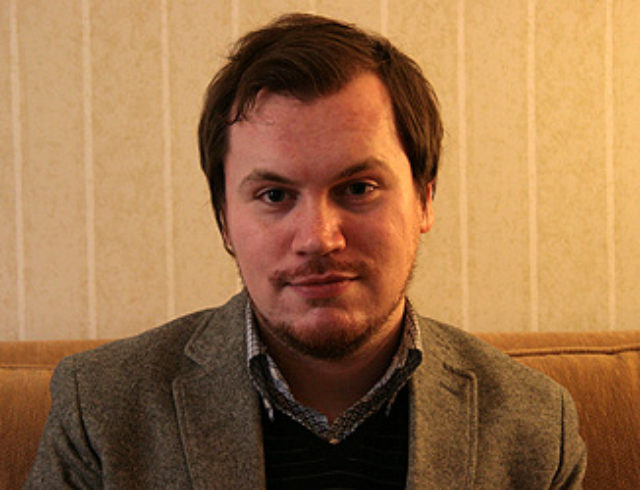 (February 4, 2011 – Toronto, Ontario) I had seen Oliver Sherman, the feature debut of Vancouver-born, Toronto-based director Ryan Redford the week before we met to talk about his film. I had left the media screening with mixed feelings. Part of me wanted to write it off as long and dull but part of me was enthralled by the slow, steady tension that builds to a not quite predictable ending. Oliver Sherman is based on a short story, ‘Veterans,’ taken from a collection published in 2005 by American writer Rachel Ingalls, who has lived in London, England since 1965.

Ralph Lucas: How did you come upon this story?

Ryan Redford: It was online. I first happened upon it in a year-end best of fiction list in the Village Voice or something like that. That led me to a review but it wasn’t until 2008… I had another project that I was trying to do and it had been upwards of five years and it was just getting too big and I felt I had made the film already, in my head, and it was time for something new. So I went to a book store, blindly perusing the aisles…

RL: Were you consciously looking for a book? Any book?

RR: I have never been big on adaptation, but I wanted short story…

RL: You had made a couple of short films at this point.

RR: They are similar to this in that they are both rural and mythic and similar to Oliver Sherman in this way. Her stuff is sort of set in Everytown, North America and her characters have names.

RL: That’s one of the things I liked about the film. Its sense of timelessness.

RR: It drives some people nuts. Some people at various stages of the making of the movie were asking if it could become more specific. Could it be more of a “Canadian” movie? Could you at least tell us where this is set? Things like that. And I was adamant throughout that we would lose that edge and it would make it a political movie. People are going to see politics in it if they want to, but I was not interested in making an issue movie. But I digress. I was talking about finding the book.

It has a really memorable cover and when I picked it up I remembered the review I had read all those years earlier and in particular the story titled Veterans. It’s about 70 pages so it’s more of a novella. I read it all in one go. It’s not an immediately cinematic story, it takes place in the head of the main character but there on the spot I was coming up with ways to visualize things, to make it cinematic. They’re very different beasts in the end. In her story the main character is more of a cipher, he’s very remote. It was my job to make it more emotional, to make the main character someone that is still terrifying but one or two seconds later he is someone that you feel for. I embrace the tragedy and sadness and awkwardness and what`s possible with this character that wasn’t there in the original story.

RL: What led you to Garrett Dillahunt, who plays the main character?

RR: How we got to him was, Molly Parker was the first person we cast, and when we met to talk about the film she asked about who else we had in mind for the movie and I mentioned we were thinking of Garrett. She had worked with him on Deadwood. So she sent him a note and I met with him. And then Donal Logue came on board. He had worked with Garrett, so it was weirdly serendipitous that they had sort of worked together. But as for Garrett it was his role in the Assassination of Jesse James that sold me. There’s a real sadness to that character, yet at the same time he’s terrifying and you know he could flip a switch.

RR: One of the tragic things about making movies is it seems like just as you’re finding your groove, it’s over. After about two weeks the cast really started to get what I was up to.

RL: To maintain, or build that sense of tension that slowly builds throughout the film, did you have the luxury of shooting in sequence?

RR: No. In fact the last scene was shot on the first day. We only had that particular location on that day and I way overshot it, so no, it wasn’t shot in sequence.

RL: So how were you able to build that sense of tension?

RR: You can only go in two directions. The Hollywood route where you put a score underneath that creates tension and resort to rapid cutting or show a lot of close-ups. I went in the opposite direction. I tried to create tension by withholding and removing. With the possible exception of the ending, nowhere else in the movie is the tension created by music. We tried to cut as little as possible, didn’t use much music, we chose our sound effects very selectively. It drives some people nuts, but if someone has a sense of film grammar they’ll understand what’s working. A general audience will still get it, but they’ll want to know why we’re not cutting right now, why aren’t you giving me something to hold on to… I’m all about restraint.

RL: And as far as I’m concerned, it works. And, what’s next for you?

RR: I’ve been saying for awhile now that I’m recuperating. I’m close to getting back on the horse. It`s between doing something that`s the logical next step, or something that’s way off in left field. is there a chance for the project I set aside? Maybe. One day. I’m not all that in love with. Like I said, I’ve already made that one in my mind. But I liked it. It was very connected to this. It was about a code of violence and how the past demolishes the present. It was a western, but strangely could be a companion piece to this movie.