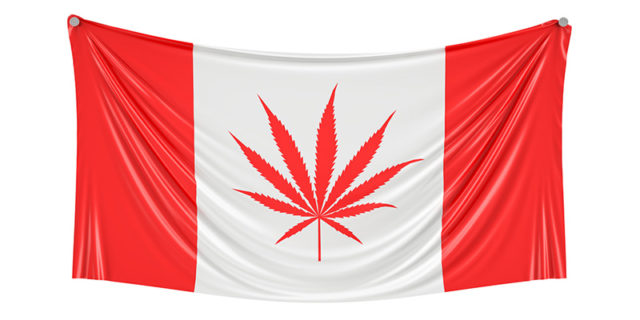 (October 3, 2018 – Toronto, ON) From Canadians’ subsequent embrace of the stuff, you wouldn’t guess that Canada federally criminalized marijuana a full 14 years before the United States did (1923 vs 1937).

A catalyst to our early “Just say no” period was Emily Murphy, one of the Famous Five who won the right in court for women to be considered “persons.” Earlier, she’d been a crusading journalist for Macleans magazine under the pen-name Janey Canuck, and wrote The Black Candle, a dubious screed against the weed that weighed heavily in Parliament’s early decision to outlaw it (though it would be a decade before any Canadian was ever charged with possession of cannabis).

But if reefer madness hit us early, the fever broke early too. Canadians have had fun with pot, both onscreen and off, for decades. Indeed, some of the Hollywood names most closely associated with cannabis are Canadian, including Tommy Chong and Seth Rogen.

Even our icons turned out to be tokers. The late author Pierre Berton once gave the nation a very educational lesson on the proper way to roll a joint on CBC’s The Rick Mercer Report.

And now, on October 17, Canada becomes the first G7 Nation to federally legalize recreational pot from coast-to-coast. This will be bad news for the Trailer Park Boys, as evidenced by the title of the first film in our list below of Movie Moments in Canadian Cannabis History.

TRAILER PARK BOYS: DON’T LEGALIZE IT (2014) – The third and final Trailer Park Boys movie sees Ricky (Robb Wells) finally get the grow-op of his dreams up and running when he receives bad news. Julian (John Paul Tremblay) – who’s hatched his own scheme selling “clean” urine for drug testing – informs him that the government of Canada plans to legalize marijuana, which will effectively put him out of business. It all leads up to a mad chase West to Montreal (where Julian and Bubbles are to make the exchange of urine–for-cash with some shady characters) and to Ottawa, where Ricky addresses Parliament unannounced.


THE ENTIRE OEUVRE OF CHEECH AND CHONG – Because, yeah, Tommy Chong was born in Edmonton, and smoked his first joint in Calgary. “I was 17-years-old,” he told me, “and a Chinese bass player gave me my first joint and a Lenny Bruce record at the same time. They both changed my life. I quit school right away and decided I wanted to be a blues musician.” Best Cheech & Chong album: Big Bambu (and not just for the foolscap-sized rolling paper that came with the album). Best movie: Up in Smoke.

NEARLY THE ENTIRE OEUVRE OF SETH ROGEN – Vancouver’s own Rogen, briefly the erstwhile voice of the Toronto Transit Commission, played a stoner in his breakthrough film Knocked Up, the ultimate stoner (possessing the ultimate stash) in the under-rated comedy Pineapple Express with James Franco, and himself as a total stoner in This Is the End. “Having no real skills, I try to play characters close to myself,” he’s said.


LETTERKENNY – The latest incarnation of the small-town hoser phenomenon, the TV series comes with its own local vernacular. It’s a land of schmelts and hockey donnybrooks with tarps off. And when the boys bring out the “electric lettuce,” you know everybody’s about to mellow out.

FUBAR: AGE OF COMPUTER – After the 2002 cult classic, and its 2010 sequel (Fubar: Balls To The Wall) the cult hero Alberta Stoners Terry and Dean (David Lawrence and Paul Spence) got their own series on Vice last year, about how they’d adapted their lifestyle to the digital era. Best bit: Terry started Airijuana, a cannabis delivery service that used drones to serve customers door-to-door.


HAROLD & KUMAR GO TO WHITE CASTLE – One of the all-time great stoner comedies, about the quest for the ultimate “munchies” fix. And it was shot in Toronto with stars John Cho and Kal Penn, and U of T standing in for Princeton University. The central irony of the film, those steamed White Castle burgers aren’t available in Canada. Why the franchise has overlooked the Great White North is a mystery. We enjoy them in the States, but we look forward to gorging on those addictive greasebombs at home someday.

SUPER TROOPERS 2 – The dumb-cop comedy Super Troopers was stoner-humour in and of itself. But the sequel, which came out earlier this year, involved the negotiated political transfer of land from Quebec to Vermont, and a scheme to import pot from Canada to the States by stockpiling it where the land-switch is due to happen. Hey, it’s a stoner comedy. It doesn’t have to make sense.


GRASS: Ron Mann’s 1999 doc on the history of marijuana prohibition won a Genie Award for best documentary, and cemented the friendship between Mann and the movie’s narrator Woody Harrelson. Mann would go on to make Go Further, a document of Harrelson’s eco-crusade along the Pacific Coast Highway in a hemp-fueled bus.