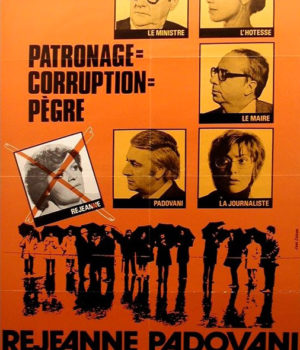 The only Canadian film to cause any interesting reaction at Cannes in 1973, Denys Arcand`s Rejeanne Padovani, a tale of the ugly world of corruption in Québec, was premiered for English Canadians at the Stratford Film Festival in 1973, has been highly popular in Québec, but did not open in Toronto until February 1974.

Still in his early thirties, Arcand has been making films since 1962 when his Seul ou avec d’autres, with Denis Heroux, and Michel Brault on camera, was completed. He is a committed Québecois whose other works include exposes of the colonialization of French Canada by the French, Champlain and Les Montrealistes (both 28 minutes, NFB), the unreleased, censored On est au coton (120 min. NFB) concerning the conditions of workers, and the film Quebec Duplessis et apres among others. Unfortunately these were not seen in English Canada.

The treatment of business and political corruption in Rejeanne Padovani takes the subject one step further than his previous film, La Maudite Galette, a bright super-B crime-and-consequences tale of personal greed and ill-gotten gains.

As with most French Canadian films you can help yourself to the several possible layers of meaning in this story of the dinner party of contractor Padovani given to celebrate the opening of his newly constructed highway, and to thank his influential friends and connections, including the Mayor, for their part in awarding him the contract.

There are two significant interruptions to the celebration, but both are carefully kept from disturbing the joyless flow of what must be one of the most lifeless parties ever. Padovani`s ex-wife Rejeanne arrives from the States and begs to see their children and return to Quebec to live, now that the young Jew she ran away with is dying of cancer, and then some over-eager young journalists try to intrude and foolishly disclose that a civic demonstration is planned for the highway opening.

Rejeanne, who deserted Padovani and her children and joined the “rival powers” now is desperate to return. “Ah God,” she sighs, “I don’t want to speak English any more; I’m sick of living in the States.” But she never gets to see Padovani. She is forced to negotiate through an unsympathetic henchman, while Padovani sits brooding in his study, mulling the “moral question” of her fate. As Padovani ponders, the parallel implication is that the Quebecois also ponder the fate of those who deserted to the “American way” and now want to return.

Fortunately the actress Luce Guilbeault, remembered as the uncomfortable waitress-stripper in Le Temps d’un Chasse, practically the only one of her ten most recent films (including OK Laliberte and François Durocher, Waitress) seen in Toronto, is such a good actress that she manages to flesh out the part of Rejeanne and make her an interesting, believable woman. Guilbeault herself isn’t so pleased with her performance. At the Stratford Film Festival she said “Arcand had too much confidence in me” and acknowledged that the tiny budget ($200,000) permitted no rehearsal, no costumes, only one or two takes per scene in a brisk two and a half day shooting schedule.

While the fate of Rejeanne as a deserter is pondered heavily, the fate of the erstwhile demonstrators is taken care of briskly and brutally in the plot. The super-highway is opened the following day as planned, and the camera allows one sentimental moment as a lengthy shot pauses at the rows of half-houses and destroyed neighborhoods the construction has created.

Everything is ugly. The little miserable men, their manipulations, their pathetic wives, their deals, their bodyguards, and their attitudes toward life. And they live in ugly surroundings, unflatteringly photographed in their suburban milieu: the concrete-block rec-room, the basement bar, the incredible tastelessness of the house, walls, drapes, lamps, fixtures and furniture. The kind of world they make and the means they use to do it echo this.

Despite an intentional dragging in the film, it moves steadily and pragmatically to its not necessarily inevitable end. Any politically-minded English-Canadian must wonder, where are our films like this? and wish we had a determined and talented group ready to use film this way. Certainly we’ve got the subject matter.

This article by Natalie Edwards was originally published in the Toronto Citizen and reprinted in Cinema Canada. Cinema Canada ceased publication in December of 1989. This version was edited for publication by Northernstars.ca in August of 2011.