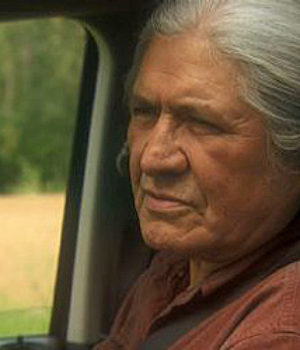 (July 06, 2011 – Toronto, Ontario) – Native Canadian actor Gordon Tootoosis has died. His career as an actor spanned more than 35 years, but his early life was marked by one of those dark moments in Canadian history and the treatment of our indigenous peoples. Tootoosis began life as one of 14 children born into a family of Plains Cree where he was raised in those traditions on the Poundmaker Reserve near Cutknife, Saskatchewan. But he was a victim of the infamous Catholic Residential Schools and was taken from his home. Harshly treated and forbidden to speak his own language, the young Tootoosis was often in trouble at school partly because his father, John Tootoosis, was an activist for aboriginal rights.

After his traumatic school years, Tootoosis went into social work, specializing in work with children and young offenders. His interest in his own cultural traditions led him to become an accomplished native dancer and rodeo roper, and he toured with the Plains InterTribal Dance Troupe in the 1960s and 1970s throughout Canada, Europe and South America.

His first acting role came in 1972 as Almighty Voice in the film Alien Thunder, which costarred Chief Dan George and Donald Sutherland. He would go on to appear in more than 40 films and is particularly remembered as Albert Golo in the CBC-TV series North of 60, and as the title character Big Bear in the mini-series Big Bear.

He was awarded membership in the Order of Canada on October 29, 2004 and his citation recognizes him as an inspirational role model for Aboriginal youth.

Relatives say he passed away from pneumonia at St. Paul’s hospital in Saskatoon yesterday, July 5. He is survived by his wife, Irene, four children and grandchildren. His daughter, Glynis, passed away from cancer more than a decade ago, but Mr. Tootoosis and his wife had been caring for their grandchildren ever since.