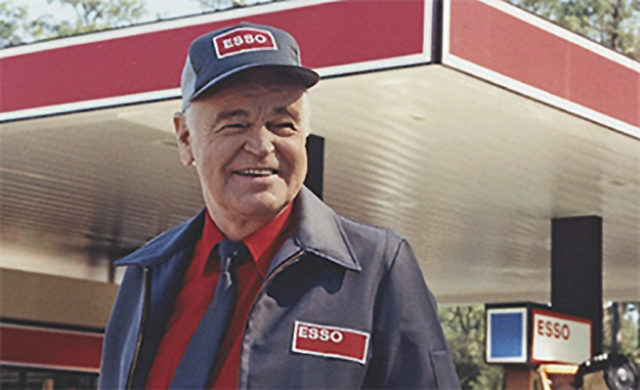 (August 28, 2018 – Toronto, ON) The man who will always be remembered by a certain generation as the pitchman for Esso has died in Toronto. At the time the petroleum giant was a sponsor of Hockey Night in Canada and their commercials featured the always smiling actor extolling the virtues of their products. Hockey Night went on the air in the fall of 1952, Westgate not only handled the commercials, which were done live in those early days, but he became part of the broadcast itself, joining the “Hot Stove League” during intermissions. The group included sportswriters and former players for the Maple Leafs such as Charlie Conacher and Harold (Baldy) Cotton.

Before he began his career, which included many non-commercial acting roles, Murray Westgate signed up to serve his country during World War Two. He joined the Canadian navy and was posted to Halifax where he was trained as a wireless operator. On his discharge in 1945, he heard that a repertory company was being formed on the west coast and so he became a member of Vancouver`s first professional theatre company, Everyman Theatre, which had been formed in 1946 by Sydney Risk. A touring company resulted and Westgate and a group of young actors toured the West. He then joined the CBC in Vancouver and was cast in radio dramas for which the CBC Vancouver studios were famous. In 1949 he moved to Toronto where his voice was soon heard in many CBC network radio productions out of the Toronto studios, among them the long-running Sunday series which began as Stage 44, directed by Andrew Allan, and the Ford Television Theatre, produced by Allan Savage.