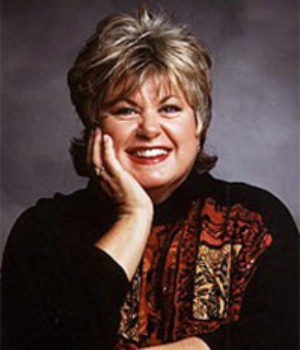 There is something so charming and innocent about Ginette Raynault’s start in life that fans of so-called biopics must wonder why no one has yet made a film about her early years. Maybe someday someone will, but then you are forced to wonder who could ever sing the way the young Ginette could sing.

Life for this future singing sensation began on April 28 1946 in a part of Montréal that remains true to its beginnings. In the narrow lanes and bustling streets that surround the marché St-Laurent, she grew up in a time when the street from which the market takes its name was known to most people as “The Main.” Main Street, Montréal style that is. Very early in her life, Reno discovered the unique joy that comes from knowing you have made other people happy. The market was home to her father`s butcher shop, and it was here that she made a debut of sorts. Customers found their way to the family shop thanks to her perfect, clear young voice. Their encouragement allowed Ginette Reynault to dream of one day being a star.

It may be hard to believe now, but all through the 1950s many, if not most, radio stations maintained live-music shows. One of the most famous in Montréal was CKVL’s “Amateur Hour” and thanks to singing lessons paid for in part by her selling newspapers, Reno was chosen to appear on the show. It was a major milestone for the young singer. For the first time in her life her audience extended beyond just a few faithful customers. She was heard by thousands of listeners. She also set her sights on winning one of the most important amateur contests ever created. “Les Découvertes de Jean Simon” attracted the very best, and Reno became not just a winner of a single contest, but the 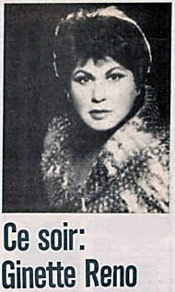 winner of the year. Part of her prize was her first professional contracts to sing in three Montréal night clubs, theCafé Caprice, le Café de l’Est and the Café Provincial. If it all started in her dad`s butcher shop, it was her mom who would help her take her next big step. She approached impresario Jean Simon and convinced him that he should become her daughter`s personal manager. He agreed, and set about to shape a star. Not just a star for Québec, but for the world.

Looking forward to an international audience, Simon insisted that her last name, Raynault, be shortened to Reno. It was Simon who arranged to have some minor dental correction work done for the young singer, as well as coaching her on diet and skin care. He also arranged for singing lessons. And during this time, Reno went from a little girl to a teenager and like all teenagers her voice “cracked.” She was about 14 or maybe 15 years old. A natural occurrence for all kids, but for Reno it was a near calamity. But her dreams and desires, and the steadying influence of her manager saw her through this early crisis. By time she was 16 years old, she was ready to go into a recording studio to begin work on her first record. Released by the local Montreal label, Apex Records, “J’aime Guy,” as it was titled, became an immediate success throughout Québec. Reno released, in quick succession “Non papa”, “Roger” and a series of other titles eagerly bought, sung and danced to by a growing legion of teenagers. Her popularity within Québec soared over the next two years, which naturally led to many offers to appear on television. Then she released “Tu vivras toujours dans mon coeur.” It became such an enormous hit that Reno was named “Découverte de l’année” at the 1964 Gala des Artistes. She was just 18 years old. 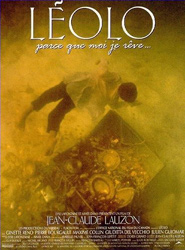 never be a star in your own hometown knew nothing about Ginette Reno. But, as planned from the very beginning, she was truly an international star. In addition to sold-out shows in Montréal, Québec City, Ottawa and Toronto, Reno has played to sold out houses in Los Angeles, Las Vegas, New York, London and Paris to name just a handful of world destinations.

With all of the experience on stage and performing for television, it came as no great surprise when Reno accepted a role in a movie. It began with the a role in Jean Claude Lauzon’s Léolo in 1992. She went on to appear in the made-for-television movie Million Dollar Babies, which starred Beau Bridges, Kate Nelligan, Roy Dupuis and Rémy Girard, and was directed by fellow Northernstar Christian Duguay. In 1997, she had a starring role in the mini-series titled Une Voix en or. Next, she played the title character in Denise Filiatrault’s C’t’à ton tour, Laura Cadieux (1998), which achieved a level of success rarely found in Canada. It also established Ginette Reno as not just an actor, but as a star with the drawing power to produce usually unheard of box office business for Canadian films. It was such a hit both in Québec and in English Canada that a sequel was released the following year. Laura Cadieux… la suite (1999), or as it is sometimes known C’t’à ton tour, Laura Cadieux 2, was, unlike most sequels, equal to if not better than the original film. Reno also co-starred in the hugely popular and tremendously successful film Mambo Italiano (2003).

It all began with a dream and singing in a public market. Back then, she hoped that maybe, just maybe, she could become as famous as Lesley Gore or Brenda Lee or Connie Francis. But unlike her American counterparts, Ginette Reno has remained popular releasing some 60 albums over the past 40 years. More importantly, she has managed to grow in new directions and find new fans at a time when most singers and actors from the mid-1960s have faded from memory. Over the years, Reno has collected three Juno awards, four Disc Festival Awards, four Metrostar Awards and a record-setting eight Adisq Awards, which celebrate the best in Francophone recordings and artists. In 1982, when she was just 36 years old, she became the youngest artist ever to be named to the Order of Canada. Celine Dion, no stranger to super-stardom herself, once said, “Ginette Reno was my idol; my inspiration.”

From everyone at Northernstars.ca, Bravo Ginette!! And “encore, encore….”

This biography is Copyright © 2004 by Ralph Lucas and may not be reproduced without prior written permission. For more information about copyright, click here.