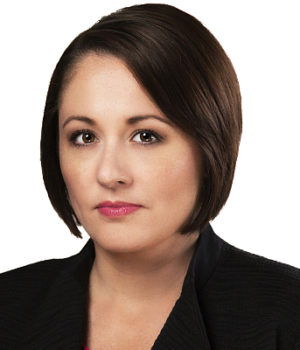 (January 5, 2015 – Toronto, ON) – CBC News has announced that political journalist Rosemary Barton has been named as the full-time host for CBC News Network’s daily political show, Power and Politics. According to Canada’s rating agency, Numeris, the show has seen an increase in viewership of more than 50% this fall from the same period last season, further cementing it as the number-one political talk show on television.

Barton joined CBC as Quebec’s legislative reporter at the National Assembly in 2004. She covered Jean Charest’s arrival as premier in Quebec as well as the intense leadership race within the Parti Quebecois that followed the resignation of Bernard Landry. She covered a number of provincial elections in Quebec both with CBC News and Global News. She has been a regular contributor and guest host on Power and Politics since 2009 and became the interim host in July 2015, leading the coverage for the show in the run-up to the 2015 federal election.

“Rosie is a leader and one of this country’s best political journalists,” said Jennifer McGuire GM and Editor-in-Chief, CBC News, English Services. “Her hosting and interviewing skills, seen daily on Power and Politics, have great resonance with the audience – both new viewers and existing viewers. We are thrilled that she has agreed to take this on permanently.”

Her background in political reporting includes coverage of the 2008 and 2011 federal elections, as well as a number of federal leadership campaigns as a national reporter with CBC’s Parliamentary Bureau. She covered the fraud trial of Conrad Black in Chicago in 2007, and more recently the Mike Duffy fraud trial. She also reported on the public inquiry into the dealings between former prime minister Brian Mulroney and Karlheinz Schreiber in 2008, and the shooting of soldier Nathan Cirillo at the Canadian War Memorial in Ottawa on October 22, 2014.