(November 14, 2022 – Toronto, ON) A precocious six-year-old named Rosie (Keris Hope Hill) lands in the care of an estranged aunt she has never met. Rosie is sweet. The aunt is too, except the aunt’s sweetness is sheltered behind a guarded exterior that protects her from the randomness of life on the street—a randomness that includes low-income jobs and the threat of eviction.

Rosie is the title character, but like so many stories of this ilk, the actual narrative belongs to the characters surrounding Rosie. In Rosie, the person primarily affected by the sudden arrival of Rosie is the aunt, Frédérique (Melanie Bray). She goes by Fred. Fred has a job. She works at an adult bookstore, which is not a career choice appearing on too many resumes and, I imagine, on even fewer adoption applications. But Fred doesn’t want to adopt. She is the first person to admit she’s barely qualified to be her own guardian, let alone someone else’s.

And though Rosie’s caseworker Barb (Josee Young) might agree, everything is done to make this guardianship work. 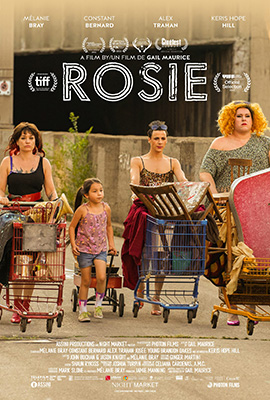 Director Gail Maurice wraps the film—based on her short film of the same name—in a warm blanket that bares a ghost-like resemblance to the kind-hearted characters that once populated a few Frank Capra movies. But Capra dealt with gangsters, gamblers, bookies, and gum-smacking molls. Most of their nefarious deeds seem harmless, aside from occasionally exposing their charge to a culture of racetracks and speakeasies. Even cursing—which when Capra was making films could only be implied—is quickly reprimanded.

It’s a bit of the same with Rosie, whose tribe of street-level cohorts are social outcasts who are merely perceived as outlaws. Fred’s best friends, a cross-dressing couple named Flo (Constant Bernard) and Mo (Alex Trahan), might be disenfranchised and struggle in the seedier district of Montreal in the 80s, but they are not outlaws. This difference between outlaw and outcast leaves room for Maurice to create a more palpable and realistic empathy for her characters while presenting a more natural look at life on the parameter.

Rosie seems content for a child recently orphaned. She appears to have processed her mother’s (Fred’s sister’s) death, as well as the cultural leap from rural life on a reservation to urban life in the city. (Rosie is indigenous).

Still, it’s a head-scratcher as to how a single, low-income pornography peddler becomes an unexpected guardian. It might seem odd—and it does—that Rosie should land in the care of the person least equipped to raise a child. The rationale might be that this is the 80s. A policy, perhaps a policy that still exists today, is to place orphaned children with family members. It sounds good, but it’s hard to imagine that the pencil pushers didn’t assume any red flags.

Maurice’s script juggles reason and logic to force plausibility on the story of an ill-advised child placement—a standard screenwriting practice in the ‘unlikely parent scenario. And there is a tendency for the script to overplay the rise-up tenacity of its spirited characters.

Maurice tells an ambitious tale that, despite occasions of oversentimentality, hits many of the right notes. But it’s Keris Hope Hill’s heartfelt performance that is the most impressive and compelling reason to see the film.

Click here to watch a clip from Rosie and learn more about the cast and crew.