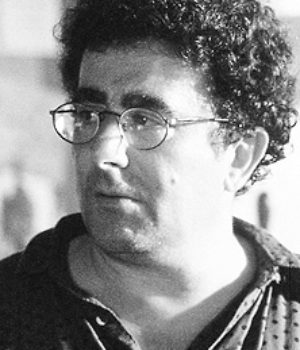 While many people equate the life of an actor with the glitz and glamor they see on personality-driven television shows or in magazines, the truth is usually vastly different. Many actors have gone on the record about how difficult it was in the early days of their careers, the hardships they had to overcome, the disappointments and how it seemed to be an endless struggle until that first break catapulted them into the warm glow of stardom. Acting was a way of life Saul Rubinek was born into, however, during a time and place no one would ever wish.

He drew his first breath in a refugee camp in Germany a few years after the end of the Second World War where his father ran a Yiddish repertory theatre company. From that early beginning, Rubinek has become one of the most recognized faces on television and in film in Canada and the United States. He began his professional career in Canada as a child actor in theatre and radio, becoming a member of the Stratford Festival company in Stratford, Ontario, in 1969. His love of theatre led him to be a co-founder, actor and director of Theatre Le Hibou, Theatre Passe Muraille and Toronto Free Theatre (1968-1974). His first exposure to U.S. audiences was as an actor at the Public Theatre in New York in 1979, and he divided his time between theatres in both countries for several years.

In a progression familiar to many actors, his reputation on stage opened the way for his early training in film and television as an actor at the Canadian Broadcasting Corporation (CBC), and that led to his first film work in Canadian independent features.

Rubinek has appeared in many Canadian films, and starred in Ralph Thomas’ Ticket To Heaven (1981 – Genie award: best supporting actor); Claude Jutra’s By Design (1982 – best actor Genie nomination); Robin Spry’s Obsessed (1987 – supporting actor nomination); Allan Goldstein’s The Outside Chance of Maximillian Glick (1988 – best actor nomination); Mort Ransen’s Falling over Backwards (1989); and Eli Cohen’s award-winning dramatic film The Quarrel (1990), which was co-produced by American Playhouse for PBS. He has been nominated for awards for his work in stage, radio, television and film, winning DramaLogue awards for his “Touchstone” in Des McAnuff’s La Jolla production of As You Like It (1984) and for directing Rick Cleveland’s Tom and Jerry at Los Angeles’ Met Theatre in 1994.

Rubinek`s work on U.S. television spans three decades and includes recurring roles on The Equalizer, guest-starring roles on Hill Street Blues, L.A. Law (the final episode), Star Trek: The Next Generation, episode “The Most Toys”, and The Outer Limits. He had a semi-regular role as Niles`s divorce lawyer on the hit sitcom Frasier for two seasons.

In American films he played supporting roles in Rod Lurie’s The Contender (2000) with Joan Allen, and in Brett Ratner’s The Family Man (2000) opposite Nick Cage. He also appeared in Andy Fleming`s comedy Dick (1999) as Henry Kissinger. He starred in Jonathan Kaufer`s independent film Bad Manners (1998) with Bonnie Bedelia and David Strathairn. He also was featured in Oliver Stone’s Nixon (1996), again as Kissinger, and on Showtime’s award-winning Hiroshima (1995), directed by Roger Spottiswood. Rubinek co-starred in Tony Scott’s dramatic thriller True Romance (1993) with Christian Slater; in MGM’s Getting Even with Dad (1994) with Macauley Culkin and Ted Danson; in Disney’s comedy-thriller I Love Trouble (1995) with Nick Nolte and Julia Roberts; and also in HBO’s award-winning drama And the Band Played On (1992).

In 1997, Rubink decided to try his hand at directing a feature. Based on the play he had previously directed, he stepped behind the camera for the Lions Gate Films production of Jerry and Tom. He was also producer on the film in partnership with his wife Elinor Reid and Ralph Zimmerman, his longtime manager. The film starred Joe Mantegna, Sam Rockwell, William H. Macy, Charles Durning, Maury Chaykin, Ted Danson and Peter Riegert, Tom and Jerry went on to become an official entry in competition at the Sundance Film Festival in 1998. In late 2000, Rukinek directed Club Land for Showtime/Paramount, starring Alan Alda and Steven Weber.

While Jerry and Tom was his first feature film, bringing more than his considerable acting talent to a project is nothing new for Rubinek. In 1988, he wrote and produced the award-winning documentary So Many Miracles for CBC and PBS. The film chronicles his parents’ reunion with the people who saved their lives during the Holocaust and is based on his book of the same name that is an account of his parents’ survival growing up in Poland during the Second World War. So Many Miracles was published by Penguin Books in 1987.

Saul Rubinek and his family split their time between Toronto and Los Angeles.

This biography is Copyright © 2001 by Northernstars.ca and may not be reproduced without prior written permission. For more information about copyright, click here.