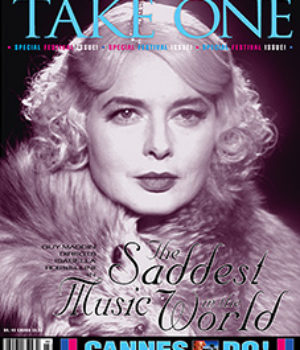 Guy Maddin finds some shade outside the coffee house where we’ve been meeting for the last couple of years every time he’s finished a film. We start with a little chit chat. He thanks me for the praise I left on his answering machine right after watching The Saddest Music in the World. I return his VHS copy of Billy Wilder’s Ace in the Hole (a.k.a. The Big Carnival), a film that drips with so much cynicism it initially seems to kid the audience but ends up being so dark it’s difficult to tell.

“Is there anything better than that last shot?” asks Maddin rhetorically. “’I am a thousand–dollar–a–day reporter. You can have me for nothing’” he says, imitating Kirk Douglas’s final drunken uttering right before his character slumps down (in a perfectly composed shot), dead of a knife wound. The unrelenting ruthlessness of Douglas’s character in Ace in the Hole obviously inspired that of Chester Kent in The Saddest Music in the World. It’s no wonder the tape Maddin loaned me had the words, “To Niv,” scribbled on the label, referring to the film’s producer, Niv Fichman.

Before the interview begins, I have to tell him about the contest I just covered for a weekly newspaper in Gimli, Manitoba, not far from his family’s cottage. It was the first ever fish–filleting competition. Two hundred people had turned out in the pouring rain to watch local fishers compete for a $1,000 prize. Maddin sees the humour in the situation. He ought to. He claims to have made his first feature, Tales from the Gimli Hospital (1988), which celebrates the ancient art of carving fish from tree bark, to get back at his Icelandic relatives. But there was more going on at that filleting competition. After the contest was over, everybody just kept on gutting fish. Their manner was fairly routine but there was a sense of urgency. They absolutely had to keep gutting the fish, as if their very survival depended on it. Perhaps when the Icelanders originally settled in the area long ago that was true, but now it seems like the remnants of an obsolete Darwinian mechanism. Of course, it takes an outsider to spot it.

That’s where The Saddest Music in the World finds its humour. The film is about an international contest sponsored by Winnipeg beer baroness Lady Port–Huntly (Isabella Rossellini) to determine the country that has the saddest musicin the world. There is a scene in which a Serbian cellist beats out a Scottish pipe–and–drum band but becomes so overcome with grief he loses consciousness. The contest 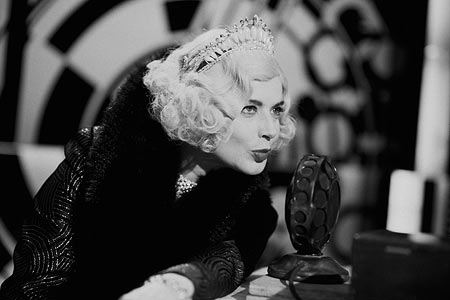 continues as if everything is 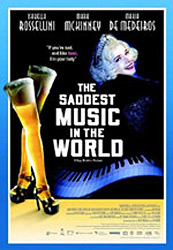 normal while his comatose body is dropped into the celebratory beer bath. The contest and the beer bath are strange enough on their own, but it’s the moment when the lifeless body slides down the ramp into the bath that the humour really takes hold. The contest must go on. The winner must take the celebratory beer bath. There’s no contingency plan in place if anything goes wrong.

Maddin has been toying with cultural rituals for as long as he’s been making films. In his celebrated short The Dead Father (1986), the nuclear family life continues despite the presence of a corpse on the breakfast table. Archangel (1990) contains a scene in which a small boy is flogged and all parties involved, including the boy, agree it’s for the best. Careful (1992) is a celebration of stern warnings not to deviate the slightest from village traditions. The ritual du jour in his latest film is the very act of being sad. Maddin, and his long–time collaborator George Toles, took an original script by British author Kazuo Ishiguro and transplanted it from 1980s London to Depression–era Winnipeg. According to the film, Winnipeg has the dubious distinction of having been named the world capital of sorrow by the London Times. Perhaps there’s an element of truth to this. “We call ourselves Winterpeg,” Maddin points out. “No one else does. No one bothers to call us anything. We love our mosquitoes. There’s something very sad about the way we adore Monty Hall and David Steinberg, who both claim to be from Toronto.”

The sadness in the film isn’t quite distributed uniformly. Winnipeg expatriate Chester Kent (Mark McKinney) moved to the United States to become a Broadway producer, but like his inspiration in Ace in the Hole (not to mention his namesake, the James Cagney character in Footlight Parade) he finds himself out of money and out of luck. Still, he’s 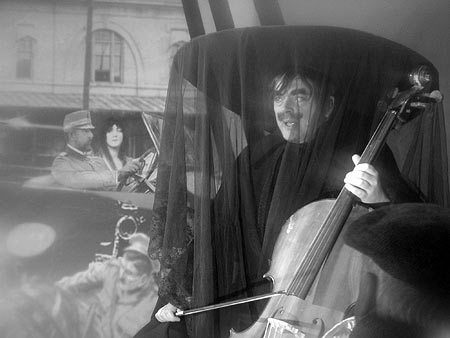 unable to feel real sadness, so for his part in the $25,000 contest he stages lavish spectacles. There’s a running gag in the film about the way he hires Mexican, Jewish, Spanish and Indian musicians to be sad on America’s behalf. His brother, Roderick (Ross McMillan), is at the other end of the spectrum. He represents Serbia, taking on the name Gavrilo the Great from Gavrilo Princip (the man who killed the Austrian archduke Franz Ferdinand in 1914), and with it he takes on that nation’s sadness at having begun the chain of events that led to the First World War. His first performance is in front of a mural depicting the assassination of the archduke.

However, Maddin’s most overtly political satire didn’t quite begin that way. “A lot of the political stuff is there because people are wearing national colours,” he says. “They start interacting and you can’t help but project things on them. When George and I were writing the script, our thesis, as we presented it to Ishiguro, was that Americans have a different way of expressing their sadness than Europeans. During the Great Depression, Americans repressed their sadness, buried it in an avalanche of razzmatazz and marching music. Depression–era Tin Pan Ally songs were upbeat, such as “We’re in the Money”; whereas, when you think of European music of the last century it was atonal and sombre. It’s embracing its sadness. It’s keeping it. It’s almost enjoying it.”

The notion of enjoying sadness, of dramatizing it, underlies every scene. Early on we see a montage of pairs of hands playing various instruments—guitars, bongos and pianos—until the fingers bleed. Perhaps the most amusing moment comes during the traditional Mexican funeral march for dead children in which the mother implores her dead 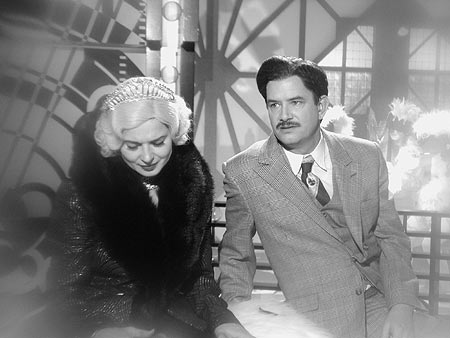 child not to sneak in at night to drink from her breast. “That milk is for the living.” Finally, Chester just says: “I don’t think all this sadness really exists.” It’s the first time in any of Maddin`s films that a character has come out and stated what the film is about. “For once I’m not really making a movie that’s dreamlike or narcotic or anything,” he says. “I hope it’s entertaining and all that, but I realized, ‘Shit, I’ve got to go for clarity,’ and Ishiguro was very valuable here. He kept coming back to me and trying to help me clarify each character’s through line.”

But Maddin, never one to pander to the audience, has Chester deliver his soliloquy during a funeral scene in which the deceased’s daughter must fight back tears while singing her father’s favourite song, “Skip to My Lou.” Again, Maddin plays with the idea of a ritual being carried out relentlessly despite the fact the song is hilariously inappropriate. Having Chester point out the phoniness of the situation puts the audience on his side, even though he is, for the most part, a reprehensible character. He once had an affair with Lady Port–Huntly, despite the fact his father (David Fox) was madly in love with her. Their triangle ended in a tragedy that left Port–Huntly without legs. Chester has moved on. But his new girlfriend, a nymphomaniac named Narcissa (Maria de Medeiros), who listens to her tapeworm the way Edward G. Robinson listened to his “little man” in Double Indemnity, bares a striking resemblance to Roderick’s estranged wife.

Maddin employs his usual arsenal of techniques, mixing black and white with colour, sometimes shooting in Super 8, using an iris, betraying continuity, inserting little bits of micro–montage editing and occasionally mimicking old hygiene films. However, for the first time, he relies on the performers to tell the story. “This story actually has real characters in it, for once in my life, rather than sort of types. It’s important that I let the actors breathe and inhaleand so on, so it actually takes on three dimensions. It’s still mannered because of George’s dialogue. It’s the way he speaks—which is unnatural, thank God—and it makes it very 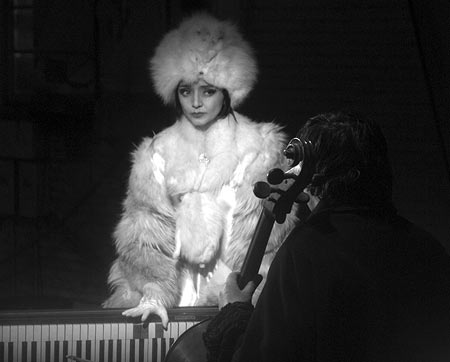 special because everything he writes has a little bit of pixie dust, or something mannered, on it. And it just helps to bring widely diverse actors from God–knows–what acting origins under the same roof.”

And then there is the music. Just as there’s no shortage of sadness in Winnipeg, there’s no shortage of ethnic groups willing to put their music up on screen. Most of the bands in the film regularly take part in Folklorama, an annual festival at which just about every ethnic group in Winnipeg sets up a pavilion featuring food, art and live entertainment. The auditions for The Saddest Music in the World were very much like the contest in the story, with each culture’s representatives attempting to prove their national music was sad enough to be on film.

Of course, The Saddest Music puts on a wicked spin when the particular upbeat brand of sadness that tends to get toes tapping and beer flowing captures Port–Huntly’s favour. The local radio station, which apparently broadcasts worldwide, takes full opportunity of the potential for advertising revenue. “The original script was set in London on the eve of perestroika when the Iron Curtain was about to come down, freeing up a huge new market for distilled goods that were coming out of London,” says Maddin. “CNN was involved somehow. The more you boil down this story, the more the presence of CNN is unavoidable. While I was making this movie, America was prepping for war against Iraq and you had the choice of CNN or a few other monster McNetworks. You got the feeling these are really powerful advertising agencies. I wish I included more radio broadcasts in the script just to get across what it really is all about: selling stuff, whether it’s booze or arms or whatever.”

It’s here, perhaps, the film finds the most in common with Wilder’s Ace in the Hole, where the predicament of a trapped prospector initiates a media circus and ultimately becomes a tourist attraction. While the crisis is prolonged for the benefit of the local burger joint, the tourists set up camp and then an ad hoc amusement park. Consumerism becomes that great American ritual. But in Maddin’s decidedly more Canadian vision, the ritual is one of self–deprecation. “I always wanted to mythologize Winnipeg as much as possible, just the way Hollywood is great at mythologizing the most far–flung corners of its own country. I thought why not Winnipeg?”

In so doing he has made a film in which the musical numbers are in black and white, the funeral scenes are in colour, the pallbearers wear ice skates and the trolley routes end at the beer hall. He also managed to work through his own sense of sadness. “After years of struggling with my own motivation, my own inspiration and a bunch of other demons, I’ve finally made three fairly large–sized pieces—Dracula, Cowards Bend the Knee and The Saddest Music in the World—in about an 18–month period. All of a sudden I feel prolific, as opposed to beating myself up every day for low production. I find myself feeling smug.”

Back to The Saddest Music in the World.
Back to Guy Maddin’s filmography.

This article originally appeared in Take One, Issue 43, in September of 2003. Northernstars.ca acquired the archives of Take One in 2007.