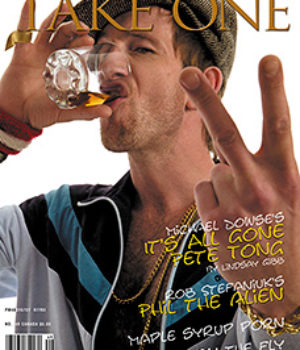 Set in the early 1950s in Hamilton, Ontario, Saint Ralph is the story of Ralph, a precocious teenage boy who lost his father in the Second World War and whose cancer–stricken mother is dying in in hospital. To avoid being sent to an orphanage, he deceives his Catholic school’s headmaster into believing he is being taken care of by grandparents. His elaborate plan falls apart, however, when his mother lapses into a coma. The doctors believe the coma is irreversible, but Ralph feels otherwise. Inspired by the saints, Ralph comes up with a plan—he will win the Boston Marathon, the miracle that is needed to save his mother. Trained by Father Hibbert, a sympathetic teacher, Ralph defies the odds and naysayers by entering the famed marathon. He doesn’t win, but his grit and determination have the desired effect; his mother lives.

Solid and sentimental, with a pleasant blend of comedy and pathos, Saint Ralph is the product of Telefilm Canada’s new emphasis on funding films with commercial potential. Writer/director Michael McGowan, who has adapted several literary projects for television, such as Mordecai Richler’s Jacob Two–Two, keeps the bar low and makes very few mistakes. His script is the film’s greatest strength, and this, combined with solid performances by newcomer Adam Butcher as Ralph, the veteran Gordon Pinsent as the grimly punitive headmaster with a heart of gold, Campbell Scott as Father Hibbert, a forward-thinking Catholic priest who reads Nietzsche to his young charges and who was a marathon runner himself before he entered the priesthood, and Jennifer Tilly as a helpful hospital nurse, make Saint Ralph an enjoyable, undemanding film.

If there is a complaint to be made here, it is the derivative nature of the story and the pedestrian manner of its direction. Saint Ralph draws inspiration from many sources, not the least of which is Rocky, the story of an underdog who dreams big, and while falling short of his dream, still comes up a winner in the end. There is also a nod to Chariots of Fire, with its theme of personal redemption in the face of implacable religious and social conventions, and because this is a coming–of–age story of a teenage boy, there is a funny masturbation scene in a public pool that could have come straight out of Porky’s when our hero spies a naked girl in a change room. The film that Saint Ralph comes closest to imitating, however, is Tony Richardson’s classic 1962 British kitchen–sink drama The Loneliness of the Long Distance Runner, but stripped of that film’s themes of class warfare and existential angst. Ralph might be a social misfit, but he wants to fit in, and the film’s sentimental ending brings him back into the Church, which forgives his minor transgressions.

Saint Ralph’s many modest and pleasant accomplishments are unfortunately undercut by its lack of originality and context. Supposedly set in the 1950s in the working–class town of Hamilton, there is little to suggest authentic period recreation, and McGowan frames his shots so tight that the film has a hermetic feel to it. Saint Ralph would make a superior Sunday night drama on the CBC, but as a feature film, it’s a workman–like effort that fails to excite or push the boundaries.

Back to the Cast & Crew of Saint Ralph

The Colour of Ink