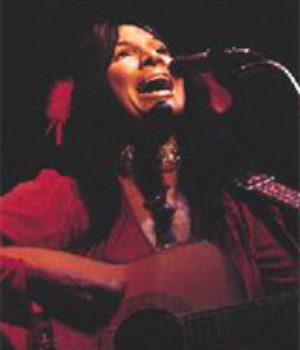 Academy Award winner Buffy Sainte-Marie was born at the Piapot (Cree) Reserve in Saskatchewan, and raised in Maine and Massachusetts. She has a degree in Oriental Philosophy, a teacher`s degree and a Ph.D. in Fine Arts, all from the University of Massachusetts. She became famous in the early 1960s for both love songs and protest songs. Her song “Until It`s Time for You to Go” was recorded by Elvis Presley, Barbra Streisand, Roberta Flack, Sonny and Cher, and over 200 other artists worldwide. Her song “Universal Soldier became the anthem of the Vietnam war protest movement.

She founded the Nihewan Foundation for American Indian Education in 1968, whose Cradleboard Teaching Project presently facilitates communication among Native American and Mainstream children in Canada and the U.S., through the use of computer technology and a progressive Native Studies curriculum.

She spent five years as a cast member of Sesame Street during the 1970s.

She won an Academy Award Oscar in 1981 for the song “Up Where We Belong” from the movie “An Officer and a Gentleman. 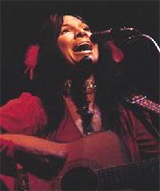 In March of 1992 in Canada at the JUNO Awards, Buffy helped to establish the new category “Music of Aboriginal Canada”. In Paris, France named her “Best International Artist of 1993”. In 1994, Buffy received the Lifetime Achievement Award in her home province of Saskatchewan by the Saskatchewan Recording Industry Association. The Canadian Recording Industry Association inducted Buffy into the JUNO Hall of Fame in 1995. She received another Lifetime Musical Achievement Award from First Americans in the Arts in San Francisco in February of 1996.

Buffy lives in Hawaii and commutes to continental North America several times a year where she teaches digital art and music as Adjunct Professor of Fine Arts at several colleges. She creates her music at home using her Macintosh computer as a recording instrument, playing most of the parts herself. Her comeback album, “Coincidence and Likely Stories” was the first documented use of the internet to deliver a music CD via modem. (Digitally recorded at her home in Hawaii and delivered to Chrysalis Records studio in London, England 1989-90). 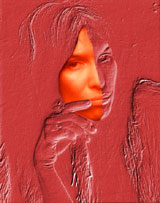 Aboriginal Canada. It`s available on Angel Records in the United States. In the spring of 1997, Buffy won a Gemini Award (Canada`s version of an Emmy) for her performance in her third television special, “Up Where We Belong”, now available on Videocassette beating out both Celine Dion and Alanis Morrisette.

A digital artist since 1984, her digital paintings were the first large scale (8×9 feet) works to appear in major museums, including the Glenbow Museum in Calgary and the Institute for American Indian Arts Museum in Santa Fe. The image on the left is title Self-Portrait Number Five. She limits her concert schedule to thirty a year in order to devote full time to the Cradleboard Teaching Project.

Buffy was presented with the Louis T. Delgado Award as 1997`s Native American Philanthropist of the Year for her work in the Cradleboard Teaching Project. Through the White House, the President`s Initiative on Race links to Cradleboard`s website as representing Most Promising Practices.

Buffy Sainte-Marie was given the Lifetime Achievement Award by the American Indian College Fund and has been named an Officer in the Order of Canada, which is the highest civilian honor our country can bestow.

This biography was supplied to Northernstars.ca by Maria Starblanket.