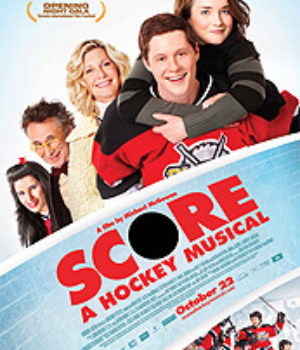 Score: A Hockey Musical
A Review by Ralph Lucas – Publisher

When the honchos behind the 2009 Toronto International Film Festival announced that the opening night gala film would be the non-Canadian film Creation, the hue and cry from film journalists was loud and clear. It may not be written in stone, but a long-time practice of reserving that slot for a Canadian film was not to be tampered with. This year it’s as if the programmers asked, You want Canadian? Have we got something for you.

Score: A Hockey Musical opens the way most hockey games open, with the national anthem, but this time it`s sung by one of Canada’s most renowned voices, John McDermott. And no staid, cold version either, but a rousing semi-Olympic version that may trigger memories of the Vancouver games earlier this year.

There’s been plenty of early criticism about the film, but I think those early critics were a little too harsh. Set in the tony Wychwood neighbourhood of Toronto, Score is mostly a teenage love story set against a backdrop of junior hockey, childhood ambition, over-parenting and all of it set to song.

I like Michael McGowan’s work. This is just his third feature film and his first, Saint Ralph, marked a highly polished start to what has been a bit of a charmed career. His second feature, One Week, was a runaway success despite being mostly a travelogue. Turns out it was the travelogue portion that pushed the movie to a fairly respectable box office take, at least in Canadian terms. I think that’s what is going to happen with Score.

Out beyond the bright lights of a jaded, pre-election metropolis choking on its own exhaust fumes, Score: A Hockey Musical will play well in the smaller centres of this vast nation. We are a hockey nation and the film, despite its weaknesses, is a testament to that. The genius was setting it in a small, almost isolated neighbourhood. Wychwood, cut off from the reality of the big city that surrounds it, is just like the small town I grew up in way back in the 1950s. It has quiet streets, small houses, and a local rink. A chance encounter with a near-blind hockey team owner (Stephen McHattie) launches a local yokel on a path to stardom. And like most cinematic stories, that path leads to a few detours, lots of potholes, and the occasional dead end.

Canada isn’t known for producing hit musicals so this was a gamble on everyone’s part. McGowan, who wrote the screenplay, also wrote all the lyrics and he could have used some help. My first reaction was that they were trite, sophomoric. But upon reflection the story is about a couple of high school kids so no one should expect the lyrics to rise much above the level of a Grade 10 poetry class.

As to the singing, I was disappointed by both Olivia Newton John as the hockey phenom’s mom, and a brief appearance by Nellie Furtado playing a rabid hockey fan. But the two teenaged stars, relative newcomers Noah Reid and Allie MacDonald, steal the show. A few 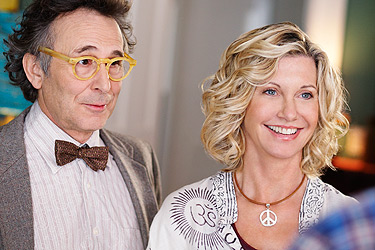 years back after seeing Moulin Rouge, my wife said it was like watching “two people standing no more than two feet apart shouting at each other’s tonsils.” Score has some of that, but here the calibre of the singing, if not the songs, is above average. Allie MacDonald in particular could rival Nikki Yanofsky’s Olympic debut for her song handling. As for singing and stick handling, Noah Reid is no slouch either.

My biggest disappointment is that all musicals survive because they produce at least one hit song, and I don’t think Score will. Writing this a few days after a pre-TIFF media screening, I can’t recall one memorable tune or any lyrics. I do recall however that it ends with what could be a new hockey anthem.

Ultimately Score is a metaphor for the nation. The sophisticated, over-bearing, well-meaning, post-hippie parents represent a Canada dotted with a small handful of big cities populated by a Starbucks-sucking, smug upper-class that wouldn’t be caught dead anywhere near a hockey rink. Then there’s the rest of us, hopefully believing that there’s more of us than there is of them. We’re the ones who, from coast to coast, will see Score for what it is: a funny take on our national sport given a new twist by someone who clearly loves his country.

Also see: The Cast & Crew of Score: A Hockey Musical.