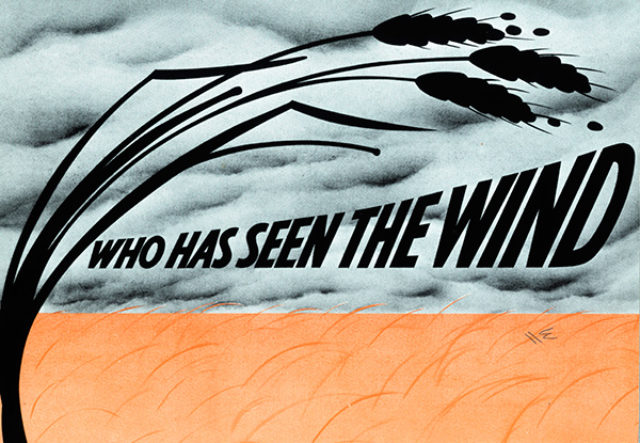 With the release in 1977 of Why Shoot the Teacher and Who Has Seen the Wind, our Canadian West was well represented last year and this not only with reasonably distinguished films but with reasonably interesting questions as well. Both films, both set in the Prairies in the Thirties, depict stages in the process of youth growing up: in Teacher, an adolescent maturing into manhood; in Who Has Seen the Wind, a young boy struggling towards consciousness. In order to achieve his end, Brian O’Connal (Brian Painchaud), the emerging consciousness of Who must engage in reconciling the world of absolute sensation with his first hazy glimmerings of conscious thought. Who Has Seen the Wind’s interrogative title is reflected throughout the structure of the film as Brian’s development follows a progression of action-question-reflection. Brian develops by confronting death, first of a kitten, then of a gopher, finally of his father (Gordon Pinsent). Death, he learns, is part of the cycle of life, and nature is the ultimate arbiter of all. You can’t have life without death, his father tells Brian at one point. The fact of death enforces on Brian an awareness of the value, the mystery, the sacredness of life. There is a religious aspect to the film—religious in the secular sense of the striving of the human spirit for communion with a force outside of and greater than itself—as there is in the novel, but W.O. Mitchell’s novel, upon which the film is based, is considerably more successful than the film in this respect.

Until the release of the film I had never troubled to read Mitchell’s book. When a cover blurb describes its contents as the “ageless story of childhood told with tenderness and humour and without sentimentality,” it is usually a fairly safe bet to assume that those selfsame contents will ooze enough sentimentality to scare off all but the most hardened Pollyannas. This cover, however, despite its deathless blurbese, turned out to be surprisingly accurate. Who Has Seen the Wind is one of those books that seems to have obtained virtually a supra-literary dimension; such books are read by one and all, aged and young alike, revered by their devotees, and respected by their critics, generation upon generation, until they assume almost the stature of Holy Writ for a particular audience. Given the quality of tbe novel, as well as its wide and devoted readership, it comes as rather a disappointment to see how indifferently the movie has treated its source material. The movie has ignored all that is best in the novel, and without having added any improvements as compensation.

Perhaps the greatest loss in transcribing the book onto film was the loss of wonder, Brian’s perpetual wonder, the open reverence with which he greets all things of man and nature. Still, when all is said, the film does manage to gather in isolated episodes an impressive power, a feeling for Life—one wants to capitalize the word as an abstraction–even while inadequately dramatizing actual details of living, so that one tends to look charitably on its manifold failings. Manifold the failings are, however, and should not be ignored entirely. They range from the comparatively minor: for example, the Young Ben (Doug Junor) is made to walk with a bent head, cast·down eyes, beleaguered slouch, indicative of surrender to the forces that cage him. He is beleaguered, but he is aIso independent, defiant, and proud, and his walk should show these characteristics. All hunched over the Young Ben looks like a schlep, which should hardly be the appearance of one of the movie’s positive moral poles. Mitchell probably thought this detail was important, too. One of the fIrst facts he provides about the Young Ben is that “his walk was smooth.”

To the major: the intended patterns of the film are clear enough, but are infrequently realized. The forces of the Prairie are arrayed against the forces of the town, with the extremes of each being embodied in the persons of the Ben crose Perrer) and Saint Sammy of the Prairie, and Reverend Powelly and Mrs. Abercrombie of the town; wild and natural forces versus cruel and vindictive, though civilized, forces, respectively. Nearer the centre lie the Young Ben, the true child of nature, and Jim Digby, who is kindly and righteous, accepting of the mysterious and unknown but striving to know and understand in any case. At the still centre is Brian, reconciling the oppositions represented at their best by the Young Ben and Digby. The pattern has a few more complications, but it is basically that, crude though it may be and without a soupçon of subtlety.

The trouble is, when the extremes are vanquished as effortlessly as they are, one wonders what all the fuss has been about. Any conflict that has arisen was evidently due not to the strength of the opposing forces but to the weakness of everyone else. And weak characters seldom provide the worthiest role models for a developing consciousness. In accordance with its questioning nature, the film forces the viewer to keep asking himself questions long after he has left the theatre. Unfortunately, the questions the viewer is left with are not the loftiest sort, and answering them is only an attempt to tie up annoying loose ends. We have examples:

Who Has Seen the Wind is a tale about a young boy’s education. Yet from the start of the film to the end, Brian’s school class continues to read the same trite story about an acorn. How much of the school term has in fact elapsed? Is this a typical Prairie education?

What fInally happens between Miss Thompson and Mr. Digby?

Was Saint Sammy going to set his Clydes free following the wind storm?

Why do we always see Mrs. Abercrombie with Reverend Powelly? Where is Mr. Abercrombie? Are the Mrs. and the Rev. having an affair? Is religion to be construed in this instance as sublimated sex?

Why is Ab so upset about Brian’s cursing?

Who has seen the wind?

Also see: The cast and crew of Who Has Seen the Wind.

This review by Gary J. McCallum, a Toronto freelance writer, was originally published in Take One magazine. Northernstars.ca acquired the digital archives of Take One in 2007.

Who Has Seen the Wind

Why Shoot the Teacher?