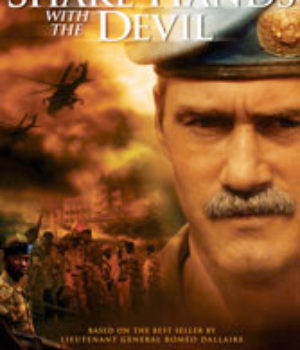 Shake Hands with the Devil
Review by Ralph Lucas, Publisher

There are all kinds of movies and in this case, I don’t mean genres. I mean there are good movies, bad movies, stupid movies, funny movies, happy movies, serious movies—which are usually called films—and then there is Shake Hands with the Devil. For the first time in a long time, Canada has produced an important movie. What makes it important, in part, is that it deals with history. Not some distant and forgotten fragment of history that only a handful of scholars might care about, but a recent event which produced a man who can only be described as a hero.

What is interesting is that this movie got made at all. I’m not taking about financing problems, or assembling a cast, or getting a distribution deal. This film is more than just recent history; it`s a story that`s been told before in different ways. Someone at some point must have questioned the wisdom of revisiting such a well-plowed field. If they did, we should all be grateful that they went ahead and made this film.

The real events in this movie took place when Canadian Lieutenant-General Roméo Dallaire was Force Commander of the United Nations Assistance Mission for Rwanda, or UNAMIR. He was an eyewitness to the 1994 Rwandan Genocide. A genocide he tried, but failed, to prevent. He told his story in the book, Shake Hands with the Devil: The Failure of Humanity in Rwanda, which was published in 2003. One year later, and just three years ago now, the documentary Shake Hands With the Devil: The Journey of Roméo Dallaire captured Dallaire`s return to Rwanda 10 years after the events that forever changed his life. In 2004 it was nominated for two Sundance Film Festival Awards and won the Audience Award for World Cinema—Documentary. A 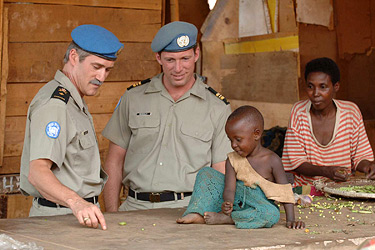 shortened version of the 91-minute film was broadcast by CBC television in early 2005. Now, a relatively short time later, comes this movie. And it’s breathtaking.

Compared to the documentary and the original book, Shake Hands with the Devil has a lot more going for it. While the central story remains intact—and anyone who knows the story knows the events and the outcome—what makes this effort so vastly different and compelling is that it is a movie. A dramatic retelling of a real story. And the director, Roger Spottiswoode, has done a masterful job.

The images are what you would expect them to be but never so gruesome that you are forced to turn away or close your eyes. In fact, he has made a movie where you feel compelled to join Dallaire in bearing witness to these events. What happened in Rwanda was, after all, a modern-day Holocaust, but one where long-time neighbours didn’t just turn their neighbours over to the authorities for slaughter: they slaughtered them themselves. In the late spring of 1994 at least 500,000 Tutsis and thousands of moderate Hutus were systematically butchered. Some estimates put the death toll at between 800,000 and 1,000,000. And it all happened in just 100 days. During this interval, Dallaire stood almost alone against the forces unleashing this horror and Spottiswoode has captured his increasing isolation brilliantly. But Spottiswoode had a lot of help.

Roy Dupuis is stunningly good in his roles. I use the plural purposely. The film unfolds in flashbacks. Back home from Rwanda, Dupuis, as Dallaire, is seeing a psychiatrist or therapist. He’s no longer in uniform. We hear his voice and see his face, but his lips aren’t moving. We are made to believe we are hearing his innermost thoughts. He is reliving his experiences in a silent nightmare he is unable to escape. This device is extremely effective because it serves to emphasize his ongoing isolation and ongoing trauma, long after the events that have brought him to this time and place. But most of the film is set in the past.

In Rwanda, Dupuis first plays Dallaire as an outgoing, charming, respected and powerful commander of men and events. But we quickly see him overtaken by things he just might have been able to control had he been given the power to match his authority. We watch helplessly, with our own growing anger and 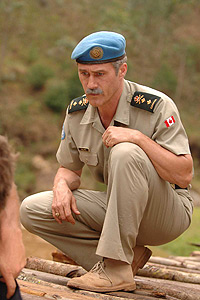 outrage, as he descends into—and is enveloped by—the ever-widening horror. Dallaire is both a soldier and a diplomat. Trained for war and knowing that if he acts quickly he may be able to prevent the coming disaster, he is castrated repeatedly by his United Nations masters. Left impotent to do anything but become an unwilling witness to a living hell, his personal descent into despair is slow, painful, and destructive. He moves from scene to scene gradually becoming the man we flash forward to from time to time: a man who`s broken and possibly irreparably damaged.

And that’s one of the other things that makes this movie important. It isn’t just about history, it is about a real hero and a Canadian one at that. No matter how dark the story becomes, Dupuis/Dallaire stands like a beacon against the darkness of man`s inhumanity to man. Instead of feeling disheartened by the knowledge that what I had just seen was only recently horribly real, I left the theatre feeling uplifted knowing that this one man—this one Canadian—had had the moral fortitude to stand up to his masters and demand that the world pay attention.

Which is the last and possibly most important reason why Shake Hands with the Devil is an important film. It is a visual testament to a moment in history when the world turned its back on a tiny corner of Africa. When politics became more important than people. When the United Nations lost its moral authority to intervene anywhere, ever again.

Lest I leave you with the impression that this is nothing more than a historical recounting of events, let me assure you that it is much, much more. Spottiswoode has created a compelling, tension-filled, dramatic film that is carefully balanced between good and evil, yet makes certain you know who were the bad guys and who were the good guys and who was the one man who paid too high a price for the courage of his convictions. And Roy Dupuis, after a series of powerful performances over the past few years, has with this role become one of the most important actors working in Canada today.

Also see: The Cast & Crew of Shake Hands with the Devil.