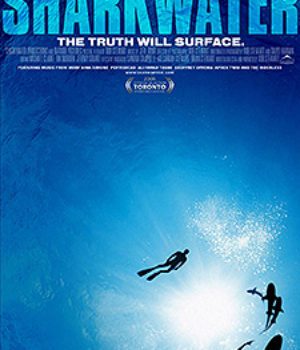 There was a time when I used to watch a lot of wildlife documentaries on television. Before Michael Moore made documentaries popular again, television was just about the only place where you could see this type of film. Occasionally there would be a grim “slice of life” reality documentary by a master filmmaker such as Allan King, but I was always drawn to the outdoor-adventure-wildlife-environmental shows. I think growing up watching Hinterland Who’s Who shorts are to blame, but I’ve always liked anything produced by National Geographic, the late Jacques Cousteau or anyone with a focus on the planet we share with so many other life forms. And so when Northernstars.ca received an invitation to attend a special screening of Sharkwater, I decided to cover the event.

I’m not sure what I expected, but I knew this was not going to be anything like Jaws. After some technical glitches at a rented cinema in downtown Toronto, Sharkwater finally got underway for a handful of people, including some representatives of various environmental organizations. While that may be a lot like preaching to the converted, their presence was welcome since the screening was on the same night as the Genie Awards. For a few minutes I thought I might actually be there alone.

Sharkwater opens with a series of beauty shots by first-time director Rob Stewart. A wildlife photographer with an international reputation, the quality of the movie is superb. Stewart not only clearly knows his subject, but he has a deep fondness bordering on reverence when it comes to sharks. Within the first few minutes, I found myself riveted to the screen when in one scene the director-narrator-cameraman kneels on the ocean floor gently cradling a shark in his arms, softly stroking it as if it is a docile domesticated pet. When the shark comes to its senses and realizes this may not be the right image for such a fearsome creature, it lazily swims away. With this one scene, Stewart has graphically demonstrated the key message of his movie: sharks are not the wanton killers we’ve been led to believe.

Through a series of charts we quickly learn that bee stings and a whole bunch of other things kill more people annually than sharks.

This first part of the movie does the job it`s supposed to do by effectively showing that the shark we love to hate, thanks to movies like Jaws, bears no resemblance to one of the planet`s most successful creatures.

I don’t wish to give too much of this movie away because it should be required viewing by anyone who believes that we should leave this earth a better place than how we found it. The hunting of sharks as portrayed in this film gives a whole new meaning to the concept of over-fishing. In a series of brutal visuals, I learned that some 100 million sharks a year are harvested from the oceans simply to have their fins removed before their lifeless bodies are dumped back in the ocean. Why? So that rich people can enjoy shark fin soup. If you thought the annual seal hunt was barbaric, or the bullfights in Spain, then you ain’t seen nothing yet.

There are some scenes where Rob Stewart gets caught up in the real life adventures of Paul Watson and his work on the high seas with the Sea Shepherd Society, which I thought could have been cut shorter, but they do not detract from the main thrust of the film.

Ralph Lucas began reviewing movies when he worked in radio in the mid-1970s. He is the founder and publisher of Northernstars.ca

That Beautiful Somewhere – A Review

The Journals of Knud Rasmussen – Review