Don Shebib’s name will be forever linked to his first feature film, Goin’ Down the Road. But before moving into features, he had made some 17 shorts and documentaries including several that won awards for the NFB and CBC-TV, such as Surfin’ (1964), Satan’s Choice (1965) and Good Times Bad Times (1969), which won three Genie Awards.

With about 8 years of experience behind him, in 1970 Shebib combined all of his talents and delivered what has usually been called “the seminal Canadian drama.” It was, more accurately, part drama, part documentary, part 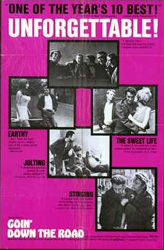 comedy and part experimental film. It was also made on a shoestring budget. Its charm is that even now, four decades later, it rises above a generally unpolished look to tell a story that once, perhaps, defined what it was like to be young, Canadian, and have dreams for the future. Released at a time when the first wave of Baby Boomers were in their early 20s, it spoke a language unique to a generation that had been largely raised on US television. Goin’ Down the Road marked Shebib as an important figure in the development of English Canadian filmmaking. At least as it was perceived from the isolated confines of an often blinkered Toronto.

Having set such a high benchmark with his very first feature film, it was virtually impossible to repeat that success. After all, the very foundation of the film business is some unfathomable mixture of magic and money that is rendered a success or failure by a fickle public and unforgiving critics. And so Rip-Off, Shebib’s second feature, was almost doomed to failure. It costarred the American actor Don Scardino, Ralph Endersby, who had found a following on the TV series, Forest Rangers, Mike Kukulewich in his only film role, and Peter Gross. This buddy film was lame from start to finish and hard to watch in parts as four friends in their last year of high school hang-out, try to meet girls, and eventually try to start a commune.

Shebib’s third feature, Between Friends (1973), was far more polished, far more successful and made the festival circuit playing in Cannes, London, Berlin, Chicago, Edinburgh, Sydney and Melbourne. Writing in the Essential Guide to Canadian Film, Wyndham Wise said this of Between Friends: “It is a taut, serious dramatic study of loyalty, Canada / U.S. relations and the limitations of male bonding. Between Friends is also distinguished for its intelligent, suggestive use of desolate Northern Ontario landscapes and its failed heist sequence rivals any film noir you can name.”

Shebib has enjoyed both critical and commercial success almost from the start although somewhat removed from that first bright impossible limelight. Second Wind (1976) for example, or the made-for-TV movie, The Fighting Men (1977), which was later given a theatrical release. Two other examples would be By Reason of Insanity (1982) and Little 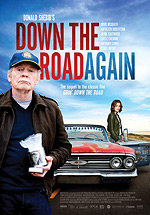 Kidnappers (1990) which gave Shebib a chance to work with one of Hollywood`s biggest stars of the time, Charlton Heston.

Not to be overlooked is his 1981 film, Heartaches, which is often thought of as Shebib`s most accomplished film. It is understandable if he was drawn to the script. The plot is similar in some ways to Goin’ Down the Road but this time it`s two woman, Margot Kidder and Annie Potts, who decide to hit the road, or more accurately, catch a bus out of town. Heartaches went on to win three Genie Awards including Best Original Screenplay for Terence Heffernan and was nominated for eight more including Best Direction for Shebib and Best Cinematography for future director, Vic Sarin.

In October, 2011 the long awaited – some would say long overdue – sequel to Goin’ Down the Road was released. Titled Down the Road Again, it enjoyed a short run and was generally well received by critics. Sebib was quoted as saying, “This is not a sequel so much as a prologue. It’s what happened in the past that is now brought to light.”

It is impossible to think of how Canadian film may have evolved had Donald Shebib made a go of it in his other early interest, football, or perhaps as a sociologist, which he studied at the University of Toronto. It is also impossible to think what may have happened in Canada had he stayed in the United States after studying film at UCLA. While it came very early in his career, perhaps Martin Knleman said it best in a 1973 article for Toronto Life Magazine, “The wonder of Don Shebib is not that he makes good films but that he makes them here.”

This biography is Copyright © 2011 by Ralph Lucas and may not be reproduced without prior written consent. The excerpt from the Essential Guide to Canadian Film is used with permission. For more information about copyright, click here.