(May 28, 2021 – Toronto, ON) When the 2021 Toronto Jewish Film Festival opens on June 3rd, the emphasis will be on Toronto. A new documentary by Toronto-based producer-director Ron Chapman titled Shelter presents a compelling mix of first-person stories, some never heard, and some never spoken until now from people who made the journey from Eastern Europe to North America, from Dachau to Toronto. 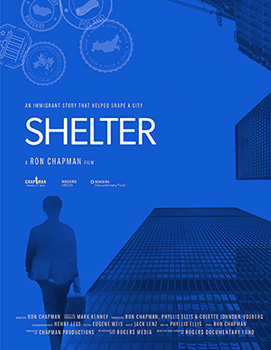 Shelter, filmed with an international cast and crew from both continents recounts their early lives and incredible escapes. One was thrown from a train by his own father, to save him from the death camp everyone knew was at the end of the line. One matriarch became a resistance fighter, destroying bridges and supply lines with dynamite. They all managed to find their way to Toronto and not only managed to survive, but thrive, and in the process, turned the small city of Toronto into what is now recognized as one of the most liveable cities in the world.

Toronto, like many places, once had laws banning Jews from certain streets, certain areas, but building was something Jews were not prevented from doing, and so they built, based on common sense approaches, such as situating high-rise properties near subway stations. Some half-million rental apartment units were built in Toronto by Jewish builders between 1952 and 1975.

Shelter shares the tales of how a vibrant industry was created out of nothing, of how ruses were used to fool anti-Semites into selling their property, and of the self-created industry’s social circle, with multi-million dollar deals made over coffee at a deli called Stubby’s.

“These inspiring people in my film include some of the last living Holocaust survivors, who, against all odds, achieved the impossible,” said director Ron Chapman. “Their lives and the families they raised here in Toronto have contributed greatly to the growth and culture of this unique city. Their legacy is a testament to the benefits of successful immigration.”