Shorter is Better in Cabbagetown
by Ralph Lucas – Publisher

(August 28, 2016 – Toronto, ON) There are so many things to love about short films. Like short stories, there is never a sense that something has been edited down, but quite the opposite. I find with shorts that there is a real sense that each creation has been perfectly honed. Like a jewel, they are small, concise, complete. The shortest films have running times several minutes shorter than the credit roll at the end of features where everyone from the fifth assistant cake decorator to each and every production driver gets named for their contribution. If you wait long enough in a theatre you’ll discover that you will soon be alone as the cinema clean up crew clears the leftover popcorn from between the seats as the credits seem to roll on and on over a carefully scored piece of music virtually no one hears. Sometimes you end up sitting through 90+ minutes only to conclude the film really wasn’t for you. With short film festivals if one particular film doesn’t quite strike your fancy there’ll be another along in just a few minutes for you to enjoy.

Full disclosure, Northernstars.ca is a sponsor again this year for the 25th Anniversary edition of the Cabbagetown Short Film Festival (CSFF). Like that other larger festival in Toronto that kicks off one day later, the CSFF is also an international festival. This year the judges screened almost 200 submissions and ended up 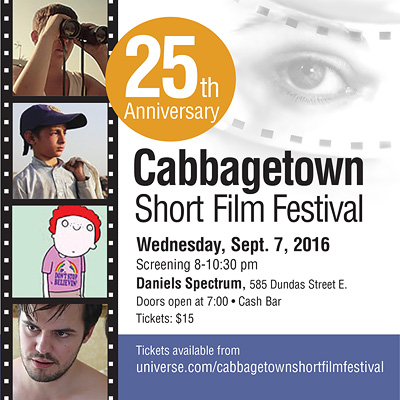 with 14 films from seven countries. We are pleased to see that six of the final films are Canadian. The rest of the lineup includes shorts from Australia, France, Germany, Italy, Pakistan and Spain. A note to future filmmakers, there is no fee required to submit your film to the CSFF.

The opening short, a few seconds under four minutes, is titled A Stop Gap Story. Created by filmmakers Taeo Levine and Natalie Plourde, the film focuses on Luke Anderson who had to relearn how to get through each day of his life when a bike accident left him wheelchair bound. One of his greatest hurdles involved mere inches. How to get into and out of stores that were not wheelchair accessible. Being an engineer, Anderson had to do something about this problem, and the result is demonstrated in this film. Quite frankly, the festival is worth attending for this short alone but it is just the beginning of a night that promises laughs, thoughts, discussions and maybe a tear or two.

For the second year the CSFF takes place at the Daniels Spectrum on Dundas East in downtown Toronto. It all gets underway on September 7 from 8PM to 10:30PM. Festival founder and driving force Gina Dineen will be there to guide the evening and introduce each film. A stalwart in the Victorian village that is the Toronto neighbourhood of Cabbagetown, this annual event is one of the highlights in the area’s calendar and is the perfect way to launch the Cabbagetown Festival which gets underway two days later.

Click here for a complete list of films and to buy tickets online for this year’s Cabbagetown Short Film Festival.

Ralph Lucas is the Founder and Publisher of Northernstars.ca