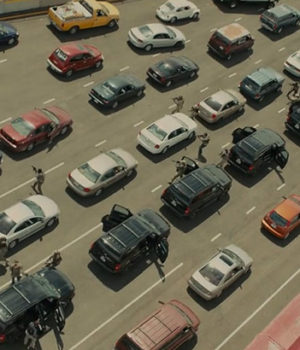 (December 16, 2015 – Montréal, QC) Denis Villeneuve’s latest triumph, Sicario, takes a very close look at the lawless world of the drug trade across the United States-Mexico border. It is a gritty, realistic drama that required subtle effects work to blend seamlessly with the cinematography of Roger Deakins. Villeneuve, whose previous directorial credits include acclaimed films such as Incendies (2010), Prisoners (2013), and Enemy (2013), assembled a world-class production team for Sicario, including VFX supervisor Louis Morin who worked closely with Alexandre Lafortune, VFX supervisor at Montreal’s Oblique FX. Oblique FX contributed CG vehicles, set extensions, blood and wound effects, and, in one grisly scene, mutilated bodies hanging from a bridge – all indistinguishable from the live action elements in the film. In all, Oblique FX was responsible for creating 123 visual effects shots for Sicario.

“Oblique FX excels at finding creative solutions quickly and efficiently, saving time and budget,” said Morin, pictured below. “At the same time, Alexandre and I have a similar vision and set the bar very high. Denis would say he loved a shot and we would tell him, ‘No, we have to take it further. It’s not finished.’ We wanted to push shots to get to the level where the effects blend invisibly within each frame.”

Oblique FX, which was founded in 2008 by Benoit Brière has worked with Morin on a number of previous projects, including Source Code, bringing Morin a VES Award nomination. With modern productions, even a story-driven movie requires CGI as a tool, not only for adding or repairing parts of the image, but for enhancing the storytelling itself. 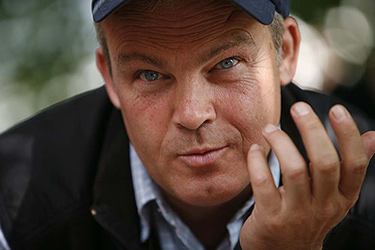 One VFX-heavy scene in Sicario takes place as a motorcade of secret ops vehicles, transporting a drug cartel kingpin, approaches a bridge leading to the U.S. border station. The heavily armed group gets stuck in a traffic jam and a dramatic shootout follows.

“There was no way to make this sequence without CG,” Morin explained. “It looks like the scene was shot on a bridge, but that is not the case.” In fact, the border crossing was filmed in an open field, where the production team had constructed a four-lane highway with 500 feet of asphalt. Containers were placed on both sides of the roadway to create the border crossing. Bluescreens were positioned at each end of the ‘highway’ and Oblique FX went to work extending the scene outwards on both sides using reference photos from the area around El Paso and Juarez. The studio then added CG cars, a bridge, and a matte-painted horizon. Bullet impact marks, blood splatter, blood mists, and wounds were also all added in CG.

“Our work on this scene helps build and shape the tension as the audience follows Blunt’s character on her journey into a world she doesn’t understand,” Lafortune explained. “Our main task was to melt the CG into what Roger had shot so fantastically. With so many different VFX elements in the scene, we had to fine-tune it until the sequences flowed so naturally that the audience just doesn’t think about how the shot was made, they are just transported by the action.”

For CG vehicles, Oblique FX used its own model banks of cars, planes, helicopters, and tanks. They then worked on the assets adding reflective surfaces and 3D lighting within each scene. “Most of the cars in commercials these days are full CG, so we know it’s possible for a few shots with a large budget and enough time,” explained Morin. “But the strength of Oblique FX is finding ways to make photorealistic models efficiently within budget. Because they achieve photorealism quickly, we were able to focus on the details that brought those assets to life on the screen.”

“The best compliment we had on the bridge sequence was in a review in Variety that liked the fact that, they thought, the director had used ‘no special tricks’,” said Morin. “That’s how we knew we’d done our job. In this kind of movie, we don’t want anybody to know where the visual effects are. The less they see you, the better.”

In a particularly gruesome scene – reflecting real-life episodes that have occurred in and around Juarez – the main character, played by Emily Blunt, and her convoy of armored vehicles pass by four mutilated corpses hanging from a bridge. Morin suggested that the production use life-size, latex puppets for the shoot, but the idea was nixed after locals warned the production team that images of the bodies would be front-page news the next day. To avoid this kind of unwanted attention, the corpse mannequins were shipped to Oblique FX where they were rendered in CG.

The mannequins were so realistic that they were kept in a locked room so others in the post house wouldn’t accidentally see them. Artists at Oblique FX scanned the figures, then textured them to create a realistic CG sequence. Villeneuve wanted one of the hanging corpses to be a woman. Since all the mannequins were male, Oblique created a female figure from scratch.

“We approached the bodies like a kind of sculpture; a terrible, frozen dance of death,” Morin said. “We positioned the bodies to come together as an ensemble composition, which compels the viewer. You want to look away but at the same time something draws you.”

“The shot calls up a powerful mix of emotions,” said Benoit Brière, VFX executive producer on Sicario and president at Oblique FX. “But it’s a pivotal part of the story and our job as artists is always to ask the question, How does this shot relate to the story as a whole? What is its place in the narrative? And then we try to see shots the way the audience does. If it affects us, we know it will affect the audience.”

Montreal’s thriving visual effects community includes boutique facilities like Oblique FX, as well as larger studios, all of which regularly collaborate with each other on projects.

“We are an agile, creative VFX studio ideally suited for independent feature films like Sicario,” said Brière. “We choose projects that allow us to focus on the artistic vision of our clients and contribute to their storytelling.”

Brière sees himself as the conductor, guiding a tight group of artists and pushing them to take their work a little further each time. “It’s an inspired team and my role is to bring their passion to life and add a bit of love to every shot. This is how to bring the best out of people.”

“It was an honor to work with Denis Villeneuve, Roger Deakins, and Louis Morin,” said Brière. “We’re thrilled that Denis has already asked us to work with him on his next film, Story of Your Life, which is currently being shot in Montreal.”

Distributed by eOne Films in Canada and Lionsgate, Sicario costars Emily Blunt, Benecio Del Toro, and Josh Brolin. The film had its theatrical release on Oct. 2.