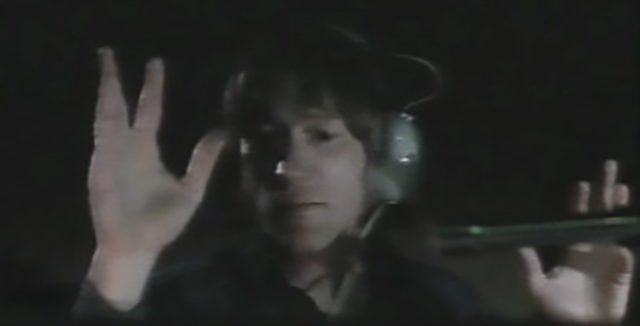 NOTE: This comment by David Acomba appeared at the end of an interview with the director of Slipstream in issue 10-11 of Cinema Canada magazine in 1973. Cinema Canada ceased publication in December of 1989.

“If you go to the film expecting a follow-up to Wedding in White or Goin’ Down the Road as far as performance and as far as story line are concerned, you’re going to be very disappointed. That’s not its forte. My next film will have less of a story line, and maybe less acting. There are faults in the film. I know I have a lot to learn. But I’m only 28, so what the hell. It got four reviews in Edmonton. One very good review, one guy hated it (he used to be with the CBC and the censor board) and two rave reviews, one from a TV station and one from a Radio station. It originally got a restricted rating, so we agreed to one cut, which is not a big number for me, but they thought they humped a little too long, so we chopped off about 10 seconds. It doesn’t destroy the essence of the scene.

That’s another thing. Go see my film stoned. It’s really nice. There are no prints in Canada right now, but we’ll be running off a bunch of new ones soon. We’re hoping to do a stereo mix as well, and maybe even use a Dolby system to cut down the tape noise. The system was used on the track of Clockwork Orange and it makes a terrific improvement in the sound. I got master copies of Layla and Astral Weeks, which have far better sound quality than you could ever get from the records. This is one of the places where the recording business and film business can tie together.

We did another interesting thing on the film. I took a home videotape recorder into a club and shot the band doing the number. Then I could take it home and work over the shooting and editing in advance. Also the musicians took the tape home with them and they could sit around and get stoned and jam with it. It`s a small black and white, low definition image, but it made it possible to work it all out. They could stop and go back and make new tapes.

I think music is the all-time art form. Each listerner can develop his own images. That`s why the radio serials that they tried on television didn’t work. Because all of a sudden everyone was tied down to the same images which weren’t theirs at all. I don’t use music that way at all. I don’t put interpretation on the music. In my TV shows, you never see shots of hands on guitars or pianos. What you see are performers’ faces, because that`s what`s important – the artist expressing himself.”