It may be difficult for those who look for the “capital-C” kind of Canadian culture to accept the fact that the character of “Red Green” is known to millions of people, while some of Canada’s finest actors remain relatively unknown after years, if not decades of plying their trade. Such is the power of television and such is the power of a simple idea.

By now most people know Red Green is the creation of Steve Smith. Some would say that Red is Steve`s alter ego. Many would argue that the reverse might be true. What many people don’t realize is that Red Green is one of the most enduring characters ever created. While countless U.S. sitcoms and a proportionally equal number of Canadian shows have come and gone, The Red Green Show, which made its debut in 1991, soldiers on. But the character of Red Green has been around a lot longer than that.

Red Green dates back to the beginning of Steve Smith`s television career and a program called Smith & Smith, a sketch comedy series starring Steve and his partner and wife, Morag. Smith wrote and produced all 195 episodes. It was on this show that the character of Red Green was created. Smith & Smith won several awards, including the Iris Award at NATPE ’85 in San Francisco. Smith & Smith evolved into the much more ambitious sitcom, Me and Max. Having worked with his wife in his first series, this time he decided to cast his real-life family and brought his two sons, Max and Dave, into the production. Red Green showed up as the more than slightly eccentric Uncle Red. You have to wonder what the kids were thinking. By the way, Smith wrote and produced all 26 episodes of Me and Max.

When Me and Max ended, the unstoppable Steve Smith went on to write and produce 60 episodes of Comedy Mill, which won a Canadian Gemini Award. Afraid that someone might call him lazy, in his spare time he accepted the position of head writer of a 13-episode series for Global television called Laughing Matters. Smith next wrote a pilot called Out of Our Minds, starring David Steinberg, for Tribune Entertainment and then, perhaps thinking to himself “and now for something completely different,” he cranked out three episodes of Top Cops for CBS International. Then came the idea for Red Green to have his own show. Its length on the air is proof of its popularity. It is also home to some fine acting. Both Steve Smith and Patrick McKenna won the 1998 Gemini Award for Best Performance in a Comedy Program or Series.

So by now you’re thinking, “Whew, I hope this guy slows down a bit because he`s starting to make me look bad.” No doubt about it, Smith is driven. Having a vision does that, but anyone who has been there knows you more than just a vision. Long before turning to performing and comedy, Steve Smith held a variety of jobs. He was, at one time or another, a mailman, a steam fitter, teacher and he even had a short career in music. But he grew up blessed with a quick wit and creative mind. As a kid, he was an endless 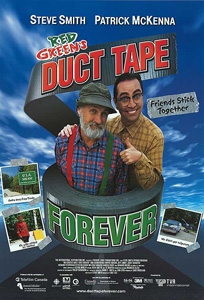 source of entertainment to his family and friends. While he was doing everything else, he has this vision that one day he might be able to make a living using his natural talents. Many people have that same dream. What sets Smith apart is that his dream is guided by a fierce determination and by a seemingly endless supply of energy.

In the spring of 2002, the feature film, Red Green’s Duct Tape Forever was released to mixed reviews. If you loved The Red Green Show, then you loved the movie. If you weren’t a big fan to begin with, then having Red Green on the big screen wasn’t reason enough to move non-believers through the movie house doors. That`s not to say the movie the movie wasn’t good. It was. If you like that sort of thing in the first place. And lots of people do. That`s why the show is so popular in the first place. By the way, Smith wrote the script.

So, you might be thinking that after 12 seasons of Red Green, and everything else Smith has accomplished, he might slow down just a bit. Well, he does spend his winters in Florida, but there`s no hope of getting Steve Smith to slow down. His umbrella company, S&S Productions, is the executive producer behind two other comedies. History Bites, the historically based, critically acclaimed comedy series is produced by Rick Green (a regular on The Red Green Show) for the History Channel and PBS in the U.S. is in production for its third season. S&S is also behind the mock game show Supertown Challenge. If that seems like Smith is slacking off a bit, S&S Productions also has a few magazine shows in production. For example, they produce The Gardener`s Journal starring Kathy Renwald, Men on Women, a panel-discussion show with producer/host Mag Ruffman, as well as Ruffman`s Anything I Can Do, which is a how-to show for women. Then there`s MoneySense Television, a financial show with host Ken Read.

S&S has several other projects in development, including a sitcom called American in Canada for the CBC, and a series of shorts featuring an angry middle-class man called Mr. Happy for the Comedy Network.

But what about Red Green? In a recent article in Famous magazine, Smith allowed that he would kill the show in “a New York minute” if the audience wasn’t there. But as long as the show is welcome in the homes of millions of viewers in Canada, the United States, Australia, and elsewhere, as Steve Smith says, he could keep playing Red “until we’re both well into our 70s.” Fans certainly hope so.

This mini-biography is Copyright © 2002 by Ralph Lucas and may not be reproduced without prior written permission. Click here for more information about copyright.