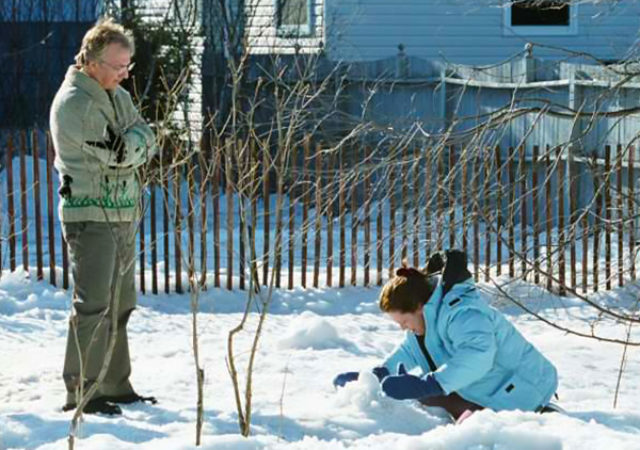 Alex Hughes is an uptight Englishman travelling the Trans Canada Highway towards Winnipeg. Viviane, a pretty young hitchhiker who is on her way home to the small town of Wawa, picks him up at a truck stop. She chooses him because he looks lonely and figures lonely people have the most to say. At first he is reluctant, preferring his own company, but she is irresistible and he agrees, only if he can kick her out as soon as she becomes annoying. This mismatched couple continues the drive along the north shore of Lake Superior, until, in an instant, Viviane is killed when a 40-ton logging truck smashes into the car. Alex miraculous survives without a scratch, and decides to continue on to Wawa to consol the girl’s mother.

So begins this quirky, downbeat film, a Canada/UK co-production, about loss and reconciliation. Alex, played with dour concentration by Alan Rickman (from the Harry Potter films and Die Hard), is a man with plenty of baggage. In a twist of fate, he lost a son he never knew in a car accident and he was on his way to reconnect with 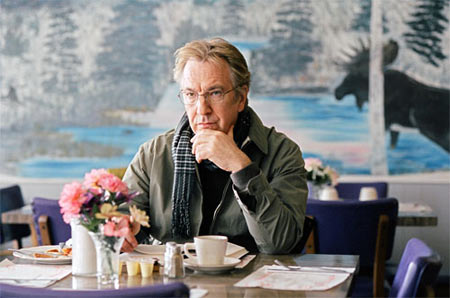 his ex-wife, who now lives in Winnipeg. In Wawa he finds the house of Viviane’s mother, Linda, who turns out to be a childlike, high-functioning autistic adult played by Sigourney Weaver. At first she tells him to go away, but he persists. At this point, the film essentially becomes a two-hander, between the emotionally wounded Alex and the disconnected Linda, who is more concerned about keeping Alex out of her well-ordered kitchen than she is the death of her daughter.

Linda’s neighbour is a well-meaning, and very attractive, single woman, Maggie (Carrie-Anne Moss, Trinity from the Matrix trilogy), who she calls a whore because Maggie has “gentleman callers.” Inevitably Alex and Maggie connect and become lovers, although it’s hard to see why she would be attracted to such a wet blanket. I suppose there is little else to do in a place like Wawa.

Snow Cake relies heavily on the charms of its lead players, and the secondary cast, which is mostly made up from Canadian supporting actors such as Callum Keith Rennie as the trucker who drives into Alex’s car, Jayne Eastwood 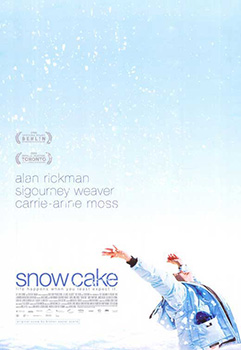 and David Fox as Linda’s parents, James Allodi as a suspicious town cop and Mark McKinney as another neighbour, have little to do and are not flushed out in any way as real characters.

Weaver steals the picture with her wide-eyed childlike ways, so very different from her ballsy Ripley character she made famous in the Alien films, but her performance seems mannered and she is locked in her own world, allowing for little character development. Rickman is very good in a role that doesn’t give him much room to express himself, and Moss`s character is out of place in the restrictive and gossipy atmosphere of a small Ontario town. One wonders why she didn’t get out a long time ago.

Snow Cake has a lot going for it, especially its well-written and witty script, yet it’s constrained by its relatively low-budget and British origins. There is precious little sense of place in the film. That stretch of the Trans Canada Highway from Sudbury to Thunder Bay is one of the most picturesque in Canada, with spectacular views of Lake Superior overseen by the dense, boreal forest, yet British director Marc Evans and his cinematographer didn’t seem to notice. They focus on the highway and truck traffic, and miss the beauty. Wawa might seem a quaint, funny-sounding place to a foreigner, but it’s locked in the Canadian consciousness and one can’t help but wonder if a Canadian had directed Snow Cake, it might feel more authentic.