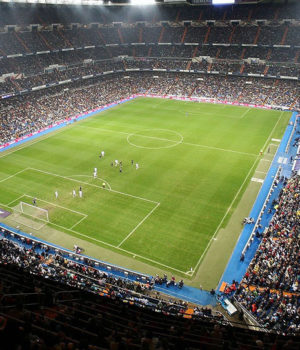 (September 26, 2016 – Montréal, QC) Some of the opening narration to a long ago TV show can be applied to all sports: The Thrill of Victory, The Agony of Defeat. It is the most popular sport in the world followed by fans in virtually every country and of all sports, soccer offers an unbeatable combination of emotions as teams battle back and forth on an immense field for 90-minutes often to end up with nothing more than a score of one-to-nothing. If there’s going to a fan riot it occurs most often from the pent-up emotions of a fan base that has been described as rabid. Not in Canada, of course. We’re far to polite for that.

Now, CBC has commissioned a dramatic eight-part mini-series that focuses on the sport and its players both on and off the field. Co-produced by PMA Productions and Generic Productions, 21 Thunder is set in Montreal and focuses on the fiercely competitive and high-stakes world of an under-21 soccer academy, following the players and coaches who risk it all for a shot at the pros. Production started in late August in Montreal and will continue until November 15, with the series set to premiere in summer 2017.

“We are excited to be working with the team at PMA and Generic to pull the curtain back on the thrilling and high pressure world of elite sports,” said Sally Catto, general manager, programming, CBC Television. “This riveting drama will offer audiences a fresh and diverse perspective on the world’s most popular sport, and what it takes to play ‘the beautiful game’ at the pro level.”

“We share CBC’s commitment to delivering an adrenaline-fuelled series that will appeal to viewers across all platforms, and attract the attention of new audiences eager for gripping, serialized dramas featuring the stories of millennials with big dreams,” said executive producers Malcolm MacRury and Kenneth Hirsch.

“By exploring the rich cultural diversity of Canada through an intricate tapestry of storylines, 21 Thunder will export Canadian values of tolerance and opportunity to international audiences worldwide,” said executive producer Michael Levine.

In the cutthroat world of pro soccer, a club lives and dies by the stars on its under-21 team. They are the future and lifeblood of any franchise, but most will never make it. 21 Thunder is the story of one such team. The eight one-hour programs will follow the team’s star players and their stories of love, crime, race, sex and athletic glory. But the foundation of the series is how a group of players and coaches can come together as family in a whirlwind of life, just one step away from the pros.

Helping to coach the team are Christy Cook (Stephanie Bennett, The Romeo Section, Descendants), an Olympic soccer hero forced on the team for PR reasons; and Davey Gunn (former Scottish footballer Ryan Pierce, who played as Ryan O’Leary), an international soccer superstar who is on the run from both the paparazzi and his past. The team consists of striker and former gang-member Nolan Gallard (RJ Fetherstonhaugh, Wayward Pines); Ivory Coast midfielder Junior Lolo (Emmanuel Kabongo, Hemlock Grove), a brilliant new arrival; and team captain, goalie and academic prodigy Alex el Haddadi (Andres Joseph, The Flash). Together they strive under notorious coach Albert Rocas (Conrad Pla, 19-2) to win games for the club, and a future for themselves.