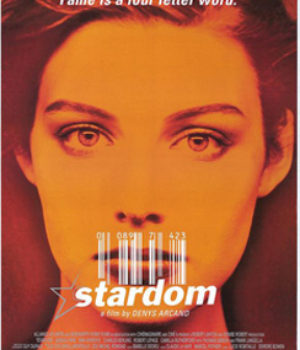 Tina Menzhal plays for the woman’s hockey team in Cornwall, Ont. At a team practice, a local photographer snaps some shots of her which he hopes to sell on the open market. They get into the hands of a local talent agent who sees the potential in Tina’s fresh–faced beauty. She is called into the agency and given the full model “treatment.” Tina is hired for her first commercial, to promote a local diary product, where she meets fashion photographer Philippe Gascon. Gascon promotes her, and soon Tina has left the agency and is on her way to Paris and the big time.

There she has an unhappy experience with the pressures of fame and the fashion industry, and returns home to Cornwall where, by now, she is a local celebrity. She starts seeing a wealthy restaurateur, Barry Levine, who is married, and is introduced to the famous fashion photographer Bruce Taylor, who is also a documentary filmmaker. He wants to make a film about her life and starts to follow her around with his camera and small crew. Tina is picked up by a high–powered New York agent and her career starts to take off. She moves to New York and is follow by the restaurateur, who has become so infatuated that he leaves his wife and children to be with her. At a New York shoot for the fur industry, Tina is attacked by a spray–can wielding protester, whom she decks in true NHL style and puts the woman in hospital. The Canadian UN ambassador comes to her rescue and he, too, becomes infatuated with her. Tina moves from New York to Europe to the Caribbean, followed slavishly by Levine and Taylor, who records her every move on film.

Tina is assaulted by Levine, who has gone over the edge with his desire for her, and he is arrested. Gascon has nude pictures of her, which he tries to exploit, but his New York show is closed down by Tina’s agent. He, too, is arrested when he is found to have kiddie porn on his computer files. Tina draws closer to the ambassador, who pays for her recoupment from Levine’s assault. They marry, but Tina wants to work while the ambassador wants her to be his trophy bride. Some very public arguments erupt as Tina is stalked by the paparazzi. The ambassador loses his composure and gives an inflammatory speech at the UN. He, too, is carried away. Tina returns to Cornwall, where she marries a local doctor and settles down.

From the famed director of Le Déclin de l’empire américain and Jésus de Montréal, comes this slight satire on the television and fashion industries, and, by extension, the cult of female beauty. While the previous two films established Denys Arcand’s reputation as a wicked satirist, a master of bourgeois angst and one of Canada’s greatest cinéastes, Stardom is a limp statement from a talent in decline. It’s not that the film is bad – it isn’t – it’s just that Arcand’s previous efforts raised the bar so high that this minor work is a major disappointment.

Its fundamental weakness lies in its subject matter. Always considered one of Canada’s most intelligent directors, for Arcand to use his formidable skills to satirize the fashion industry is rather like taking a howitzer to blast a butterfly. It’s overkill. Robert Altman, another director with a laser intellect, had similar problems with Ready to Wear. The industry is so ripe with foolishness, pretensions and self loathing that nothing can be said or done to make it appear even more foolish. It seems like a waste time even to try, and Arcand adds to his problems by what he obviously thought to be the solution to making a film about a subject matter so shallow. Everything about Tina’s rise to fame is mediated through a camera lens. This is the major conceit of the film and its major failing.

Stardom begins with a photograph of Tina (Jessica Paré) taken by an amateur. He later appears on a local cable station hawking his wares. This device is then repeated throughout the film. Tina is followed by a news crew as she becomes as a model. She is seen through the lens of Philippe Gascon (Charles Berling), then interminably through the probing, documentary lens of Bruce Taylor (Robert Lepage). She appears numerous times on TV, from MuchMusic–style fashion clips to a heated discussion by French intellectuals. This mixture of visual styles goes on for the entire length of the film, but unfortunately runs out of steam at about the 60–minute mark. After that, it’s merely repetition and you are just longing for one steady shot or a lengthy take.

The film is not without its moments of humour. When Tina knocks out the animal–rights protester, she then appears on TV with the ambassador (Frank Langella), who explains, straight–faced, that she is part aboriginal and therefore her actions where justified in a defence of her people’s centuries–old right to practice hunting and trapping. Nor is it without true pathos. When Tina’s long–estranged father shows up on an up–scale TV gab fest – in the style of the Oprah – he does so for the money, causing the distraught Tina to bolt mid–broadcast. Later she is caught by Taylor’s camera crying with the pain of a child who has lost her father. These moments are not sustained, however, and one soon gets the impression there is not too much to Tina. She glides through her changes in fortune without anything making much of an impression.

This blank slate is a deliberate endistancing device that Arcand uses to explore the fascination some men have with female beauty. Arcand has said in an interview that he is captivated and made weak in the presence of beauty, but in our politically correct times this is seen as a failing – the chauvinistic and impolite sin of “lookism.” As a sardonic comment on this “sin,” Arcand has only the most craven of the men talk to the camera about Tina in this manner. Gascon has his theories, but in the end he is only out to exploit Tina. A nerdy TV host quotes Plato – “beauty is a beautiful woman” – and allows that beautiful women form a subspecies of the human race. Tina literally drives her men wild with desire. The restaurateur (Dan Aykroyd), is carried out of a courtroom ranting when convicted of assaulting her, and the ambassador destroys his career with a funny, inflammatory speech at the UN after their marriage is brought to an abrupt end. It’s passion over reason, Arcand seems to be saying, and beauty trumps brains any day of the week.

Part tomboy, part high-fashion model, newcomer Jessica Paré is perfect for the part of Tina. However, the men who lust after her – Berling, Aykroyd and Langella – are merely okay and only Gibson, as the super–cool New York agent, stands out. Arcand occasionally achieves some impressive directorial flourishes but he is severely constrained by his self–imposed limitation of imitating a string of dreadful TV talk shows. Stardom, I suspect, looked better on paper.

This review of Stardom was originally published in Issue 30 (Winter 2001) of Take One magazine. Northernstars.ca acquired the archives of Take One in 2007.

The Subversive Charm of Gary Burns