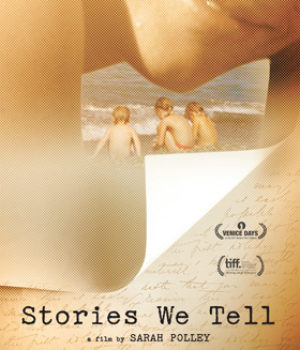 (October 15, 2012 – Toronto, Ontario) Sarah Polley’s latest film is a personal documentary that begins with a mystery then curls back on itself to become an insightful discourse on the ephemeral nature of truth and who’s telling the story – or has the final cut.

The basic facts are these and by now well-known to fans of the popular Oscar-nominated Canadian actress-writer-director (Away from Her, Take This Waltz): sometime after her mother, Diane, died of cancer when Sarah was 11, it became a barely contained family secret, almost a running joke, that she bore no resemblance to her father, Michael Polley. More recently, Sarah made a concerted effort to discover the truth about her mother’s private life away from the family, and narrows the possible lovers down to three. However, to her surprise, none of those three were her biological father. Instead, a lunch with Montreal film producer Harry Gulkin (Lies My Father Told Me, Jacob Two-Two Meets the Hooded Fang), now in his eighties, revealed that he had an affair with Diane that lasted two years and Sarah was his daughter. Later, DNA testing proved this claim to be true.

To make things more interesting, at least to those who are not ready fans of the multi-talented Polley, she constructs her film as a smart post-modern mystery, where all the participants – her four half-siblings, her father and her 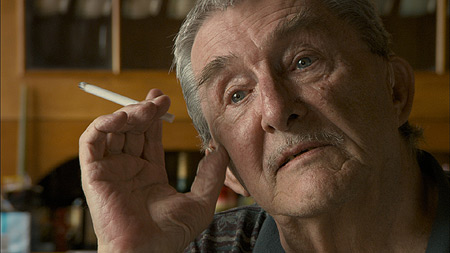 mother’s long-time friends – tell their version of the “truth.” The film opens and closes with Michael (pictured) a one-time actor and aspiring writer, reading from a prepared text in a sound booth while Sarah records him. This text acts like a Greek chorus, and Sarah returns to her father reading into a mic several times throughout the film’s running time.

The rest of the film consists of talking heads, resurrected home movies and grainy dramatized events of the past. These dramatizations are particularly effective and seamlessly integrated into the whole. As often as not, such dramatizations are silted or worse, phony. In Stories We Tell, Polley employed accomplished actors to play the key roles – Rebecca Jenkins as her mother, Peter Evans as Michael and Alex Hatz as Harry – and the scenes were shot in 8mm then optically treated to give a greater sense that they are “real” home movies. So effective are they, it takes a while to differentiate the segments with Diane and those with Jenkins playing Diane.

At the centre of the film, and the one missing voice is, of course, that of Diane Polley. She is not around to explain her actions or affairs; instead, we hear from her family and friends that the one-time actress turned casting director had a “contagious personality,” was “fun at parties” and “excitable.” She married Michael 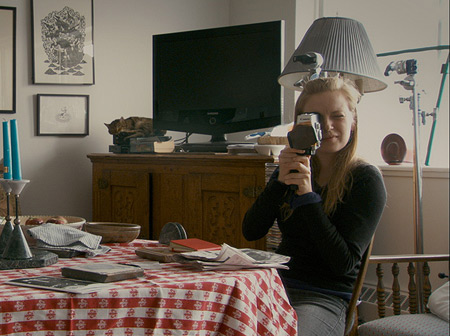 following a nasty divorce from her first husband, in which she lost custody of her two children and her moral character was the subject of newspaper headlines. (It was the first divorce in Canada where the father was given custody of the children.) The marriage to Michael produced two more children, but the vivacious Diane became restless when he turned from acting to a more secure future in the insurance business. She jumped at an opportunity to appear in a play in Montreal, even though it meant two months away from home. It was during this time that she took Harry as her lover (although the suggestion is that she may have had more than one).

Stories We Tell is a heartfelt, emotionally complex and sincere journey of discovery. It’s also self-indulgent, repetitious and its Rashomon-like structure is something of a cliché. Remarkably, what the film lacks is any notion of what Sarah actually thinks or feels about her family secrets. She controls the film, cajoles her father to open up about his life in a very public way, then sits watching without expression as he does so, correcting his delivery when she is not happy with a line reading. There are only glimpses into her thinking in the voice-over reading of emails to Michael and Harry.

As one of her siblings points out, it’s Sarah’s film and she can edit it any way she pleases. In the film world, this is what is known as having the final cut. In Stories We Tell, she uses that power wisely, never assessing blame and giving fair and equal balance to all involved. It’s a testimony to her skill and diplomacy that she managed to pull it off as well as she did, and for the most part it’s a pleasure to watch.

Back to the Cast & Crew of Stories We Tell.

Poster and photos courtesy of Mongrel Media and the National Film Board.

This article was written for Northernstars by then Contributing Editor Wyndham Wise and is Copyright © 2012 by Northernstars.ca. For more information about copyright, click here.