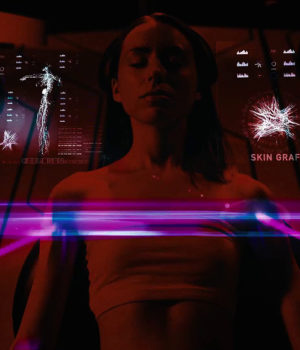 (May 16, 2016 – Cannes, France) Canadian actress Kate Vernon is no stranger to sci-fi appearing from 2004 to 2009 on the series Battlestar Galactica. So she was a perfect fit to join Ed Begley, Jr., newcomer Angela Billman and Ben Whitehair in the suspensful sci-fi romance, The Summerland Project.

The execution is remarkable while the plot is relatively simple. In fact, it’s a love story set sometime in the future, possibly the near-future. Amelia and Carter Summerland (Angela Billman and Ben Whitehair) are a newly married couple. Amelia has an aneurysm and becomes locked in. Carter is approached by a corporation who would like to use Amelia as a test subject, for a procedure where they will copy her personality and memories into an android body. But is the result really the woman he loves? Or is it something else entirely? Who is Amelia Summerland?” 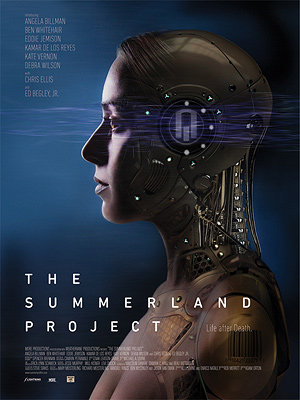 Lightning Entertainment has announced the Cannes World Market Premiere of the film.

“It’s a thrill to be sharing this movie with industry members in Cannes,” said Lightning Entertainment’s Mathilde Epstein. “It’s rare when a film packs such commercial viability into a smart and provocative story. We are excited to show footage of The Summerland Project to distributors for the very first time.”

Produced by Alex Levine and Enrico Natale, The Summerland Project is directed by Adam Orton who said, “We were all sensitive to the fact that this technology is already here, we’re right on top of actually being able to transplant life itself. We wanted to shape a narrative around the inevitable questions that’ll arise when we start transplanting the essence of a loved one into a host. With such a talented team in front of and behind the camera, we’ve achieved something truly amazing that defies the limits of what humans are capable of and the possible dangers when technology takes over.”

Ultimately the question The Summerland Project asks is: Will it one day be possible to live forever…?
Now in post-production, the film is expected to be finished by mid-June but no firm release date has been set for the film. Established in 2001 and based in Los Angeles, Lightning Entertainment is representing international rights on the film. Other projects from Lightning Entertainment include the action packed Showdown in Manila, starring Alexander Nevsky and Casper Van Dien, the sci-fi adventure film Synkhole and the drug cartel crime thriller Powder and Gold.