His career as an engineer may not have taken off because of his penchant for acting but that hasn’t stopped Donald Sutherland from crafting a career of phenomenal stature. Born Donald McNichol Sutherland on July 17 1935, he was destined to greatness. With a name like that how could he not be? He attended the University of Toronto and had a double major in Engineering and Drama. It is obvious which won out, and to further his talent he attended the prestigious London Academy of Music and Dramatic Arts. One of his first films, Castle of the Living Dead, in 1964, was written by Warren Kiefer, (namesake to Donald`s son). He moved quickly in a number of directions and his versatility was apparent early in his film career. Sutherland appeared in the WWII film The Dirty Dozen in 1967, and as a chorus leader in Oedipus the King in 1968. The fact that he could pull off the two successfully is the key to understanding the depth of his remarkable ability.

His infamous role as Capt. Benjamin Franklin “Hawkeye” Pierce in the film M*A*S*H came in 1970. He won rave reviews for his performance and it was this film that made him a star. With this ranking came the opportunity to appear in a variety of films that would not have been available to him previously. Films like Klute, costarring Jane Fonda in 1971, The Day of the Locust in 1975 and 1900 in the same year.

Sutherland, of course, is not just a movie star. His work in television, although scant, cannot be overlooked. One stellar example is the CBC production of Bethune in 1977. Back on the big screen one year later his versatility evident in the very different roles required by Invasion of the Body Snatchers and 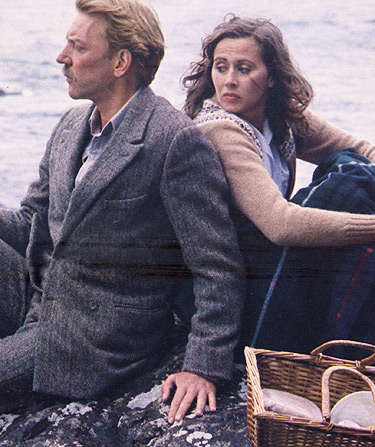 then Animal House. With the start of a new decade, Sutherland shifted into the highly dramatic role called for in Ordinary People, with Robert Redford making his feature film directorial debut. Costarring Mary Tyler Moore, his work brought rave reviews from fans and critics.

Sutherland`s grasp on success was certainly secure and he went on to make an average of two films a year throughout the 1980s and won a Genie for his performance in Threshold. In 1981 he costarred with London, Ontario-born Kate Nelligan in the spy thriller, Eye of the Needle. The image on the right is scanned from an original publicity still in the Northernstars Collection. Next, Sutherland put his talent to the test playing a pyromaniac in Backdraft.

A role in Oliver Stone`s JFK widened the breath of his work in 1991, and he was a standout within an ensemble cast that included fellow Canadian, John Candy. A cinematic version of the Broadway play Six Degrees of Separation was, without doubt, one of his shining hours. He won rave reviews for the 1993 performance, along with his costars Stockard Channing and Will Smith. Back on the small screen he won an Emmy for outstanding supporting actor in Citizen X in 1994-1995.

Sutherland next played Lucien Wilbanks, an alcoholic Southern lawyer with a few tricks up his sleeve in A Time to Kill, which was adapted from the John Grisham novel and made in 1996. In 1998 he played the coach of American phenom runner Steve Prefontaine. Without Limits was one of two movies released about the athlete. Space Cowboys was his Y2K project and saw him easily hold his own against some of the beggest names in Hollywood.

Yet another quick change for the multi-talented Sutherland came in the form of voice acting for the animated Final Fantasy, which was released in 2001. In early November, 2000 he was honoured in Canada with a Governor-General`s Performing Arts Award.

The year 2000 also brought the east coast native to a personal milestone when he turned 65. Now well into his 70s he shows no signs of slowing down and has completed more than 26 films since the dawn of the new millenium as well as costarring in a modern, fast-paced TV series that, unfortunately, didn’t get renewed. And, across all that recent work, like his entire career, he has moved happily from role to role easily becoming one different character after another. Perhaps that has been the secret to his long success as he continues to work hard in his 50th year as a film actor.

All of the images of Donald Sutherland were scanned from originals in the Northernstars Collection. This biography is Copyright © 2014 by Northernstars.ca and may not be reproduced without prior written permission. Click here for more information about copyright.