Starting out at fifteen in the movie business these days may seem a little old – Anna Paquin was just eleven when she won an Oscar for her work in The Piano – but in 1983 Kiefer Sutherland was intent on doing just that. With mother Shirley Douglas, a staple in Canadian acting circles and father Donald Sutherland, it’s amazing he could hold out until the ripe old age of fifteen. A little help from dad brought the younger Sutherland a small walk-on part in Max Dugan Returns in 1983. But the story begins a little before that.

Kiefer Sutherland was born Kiefer William Frederick Dempsey George Rufus Sutherland. He, and his twin sister Rachel, were born in England. Soon after the family set up home in Los Angeles but when the kids were just 4 their parents divorced and Shirley Douglas and her children moved to Toronto. Both kids spent time in the theatre with their mother and occasionally visited the movie sets where their father was working. Just a year after working on Max Dugan Returns, Sutherland landed his first starring role in the 1930s coming-of-age drama, The Bay Boy. It was a critical success and after Sutherland won a Genie Award in 1984 he decided to try his luck in New York. His move signalled that he was serious about his future as an actor. The fact that he dropped out of high school should have been the first real indication.

Pursuing the craft of acting in America involves making decisions. Kiefer Sutherland knew from the beginning that standard daytime television and commercials weren’t career choices for him. After about a year of being unemployed in New York, he moved to Los Angeles. He landed a small role in a Steven Spielberg TV series, Amazing Stories, which caught the attention of Rob Reiner who cast the young actor to play Ace Merrill in the 1986 film, Stand By Me. It was the break he was looking for.

In 1987 Sutherland began his steady ascent in Hollywood. The Lost Boys was a vampire thriller set in small town anywhere. Suddenly his face was out there and 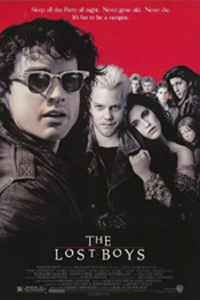 being recognized by moviegoers. With only a few films under his belt he was already showing an ability to play a large range of characters. Like father like son? Perhaps, but the younger Sutherland wasn’t looking for the next M*A*S*H. He was intent on finding his own path and he did this by working almost non-stop. He had five movies out in 1990 including Flatliners and the sequel to Young Guns.

In 1992 he took a role that allowed him to step out of the spotlight appearing very convincing as an officer in A Few Good Men. His performance was sparked with intensity and contempt. Playing opposite such actors as Jack Nicholson and Tom Cruise, he held his own. This opened a whole new door to his acting talents and abilities. He found the satisfaction of small supporting parts both challenging and rewarding. More ensemble work in the form of Article 99 (1992), The Three Musketeers (1993), and A Time to Kill (1996) followed.

He had been in the business for some 13 years when he decided to stretch his abilities by appearing opposite his mother in the Tennessee Williams play, The Glass Menagerie. It was a critical success. Sutherland later admitted that it was one of his hardest roles he had played because of the intensity of the play and his role. He also said that he loved every minute of it.

Sutherland`s next challenge came when he decided to move behind the camera to direct Truth or Consequences N.M. He liked it enough to try it again with A Soldier`s Sweetheart in 1998 which had its world premiere at the Toronto International Film Festival to positive reviews.

Feeling it was time to get back to acting, he learned that British-born director, Stephen Hopkins wanted to talk to him. Hopkins was an old friend and had been hired to direct a pilot for an innovative new television series called 24. He encouraged Sutherland to consider the lead role. His now almost trademark portrayal of Jack Bauer has earned him recognition as the Best Actor in a TV Drama at the 2001 Golden Globe Awards and the 2003 Screen Actors GuildAward for Best Actor in a Drama. Originally premiering November 6, 2001, 24 was nominated for a total of 73 Emmy Awards, winning for 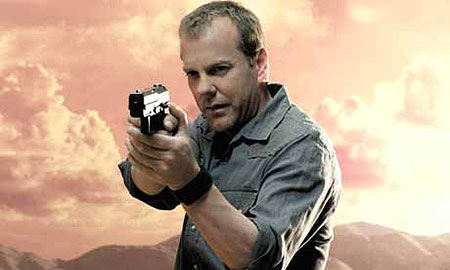 Few film actors succeed when they move from the large screen to the small screen, but the series was special and everything about 24 promised to give viewerssomething very different. The program received rave reviews from its very first episode and has developed tremendous loyalty from its viewers season after season.

Despite an unheard of production schedule – no other series produces 24 1-hour programs eachyear, Sutherland has been able to continue his work on the big screen, although it was mainly his voice that got a workout. He was TheCaller in the critically acclaimed film, Phone Booth. Then in March of 2004 he made a memorable cameo appearance inthe big screen thriller Taking Lives which starred Angelina Jolie and Ethan Hawke. He spent the summer of 2004 in New Zealand filming the epic period drama, River Queen and his voice was heard again in the Disney animated film The Wild, released in 2006.

In 2006, Kiefer Sutherland had been acting for 25 years. Just in time for his 40th birthday, Entertainment Weekly placed him in 4th position in its list of the Top 10 Entertainers of the Year. Earlier in the month Sutherland learned that he had been nominated yet again for a Golden Globe for his work in 24. But the sunshine state he seemed to live in changed dramatically in late 2007. A minor arrest for driving while under the influence became compliacted when it was learned the offense occured when he was still on probation for an earlier run-in with the law and alcohol. That resulted in a 45-day sentence putting the star behind bars and under a cloud. When the Golden Globes were announced in December of 2007 neither Sutherland nor 24 were on the list.

In 2013 it was announced that Sutherland would revisit the highly successful series 24. Produced by 20th Century Fox Television, Imagine Television and Howard Gordon’s Teakwood Lane Productions, 24: Live Another Day followed the exploits of Jack Bauer, picking up his story several years after the events of the final season.

This biography is copyright © 2013 by Northernstars.ca and may not be reproduced without prior written permission. Click here for information about copyright.