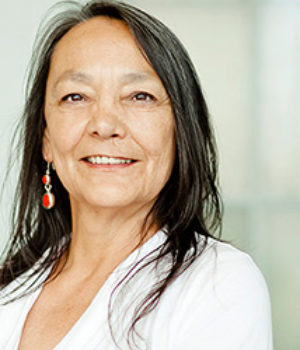 (October 2, 2015 – Toronto, ON) The imagineNATIVE Film + Media Arts Festival has announced that Métis actress and Indigenous film legend, Tantoo Cardinal will be the recipient of the inaugural August Schellenberg Award of Excellence.

The August Schellenberg Award of Excellence is an annual prize that recognizes significant professional and personal achievement by an Indigenous Actor of all genders from Turtle Island (North America). The Award will be presented to Tantoo at the imagineNATIVE Awards Show on Saturday, October 17 at the TIFF Bell Lightbox.

“We are absolutely delighted to name Tantoo Cardinal as the recipient of this new award, honouring the legendary actor August Schellenberg,” said Jason Ryle, imagineNATIVE’s Executive Director. “Tantoo is a trailblazer in this community, just as Augie was.”

Tantoo Cardinal has worked in film and television for over 40 years, appearing in over 100 projects including Blackstone, Dances with Wolves, Mohawk Girls, Blood River, North of 60, Strange Empire, Legends of the Fall, Arctic Air, Every Emotion Costs and Loyalties. Tantoo is a Member of the Order of Canada, and a passionate activist on behalf of Aboriginal people and culture.

The August Schellenberg Award of Excellence was designed in partnership with Joan Karasevich Schellenberg to honour her late husband, actor August (Augie) Schellenberg, and the spirit of his work. This annual award will be presented to gifted Indigenous actors based on the longevity and impact of their career, as well as their professionalism and involvement in mentorship and community work. Sponsorship for this award was generously donated by ACTRA, ACTRA Performers’ Rights Society and by individual donors, including, family and friends of Augie.

Montreal-born Mohawk actor, August Schellenberg, performed in hundreds of theatre, film and television productions throughout his long career including Saving Grace, Free Willy, Black Robe, North of 60 and Bury My Heart at Wounded Knee. He was nominated for an Emmy Award for Best Supporting Actor in a Mini-series or Movie for his role as Chief Sitting Bull in Bury My Heart at Wounded Knee, and played the titular role in an all-First Nations version of Shakespeare’s King Lear at Ottawa’s National Arts Centre.

The 16th annual imagineNATIVE Film + Media Arts Festival will be held in Toronto from October 14-18, 2015.