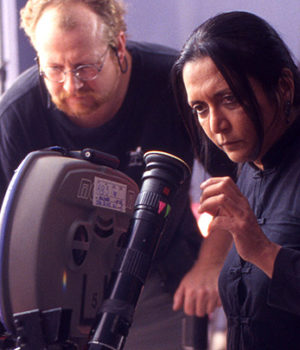 “The relationship between artists and critics can certainly be fractious, but in a strange way we are inextricably connected – we all have a passion for movies (well not all movies) and value it when they make a contribution to increasing our understanding of each other and reveal the foibles of human existence. I admit that I am sometimes strongly opposed to the views expressed by some critics and perhaps am too vocal at times about my disagreements. This makes this award even more precious to me.

I wanted to add that Technicolor, who sponsors this Award and lets me “give” $50,000 in services to a fellow filmmaker (how great is this!), has worked closely with me on many of my films with a generous, flexible understanding of the inner workings of movie making. I am really delighted to be associated with them as part of this Award.”

“Deepa Mehta has expanded the horizons of Canadian cinema with intrepid vision,” said TFCA President Brian D. Johnson. “In a career spanning 25 years, her films have crossed boundaries between continents and cultures, genres and genders. As a fiercely independent female director, with a canvas that ranges from brutal injustice to Bollywood delirium, she’s shown there’s no limit to where a Canadian movie can go.”

In May 2012, Deepa Mehta received the Governor General’s Performing Arts Award for Lifetime Artistic Achievement, Canada’s highest honour in the performing arts. In 2013, Mehta was appointed as an officer to the Order of Canada, Canada’s highest civilian honour, for her work as a “groundbreaking screenwriter, director, and producer.” She is also a recipient of the province of Ontario’s highest honour, the Order of Ontario.

The Technicolor Clyde Gilmour Award has been given to Canadian industry figures whose work has in some way enriched the understanding and appreciation of film in this country. Past winners include Elwy Yost, James Quandt, Robin Wood, Kay Armatage, Allan King, John Dunning, and Norman Jewison. The award was last given to Piers Handling in 2014.

The Toronto Film Critics Association will announce the bulk of its 2015 awards on December 13, 2015, including the Stella Artois Jay Scott Prize for an emerging artist and the Manulife Financial Student Film Award. The TFCA will also name the three finalists for the coveted Rogers Best Canadian Film Award, by far Canada’s richest film prize at $100,000 with $5,000 going to each of two runners-up.

The winner will be announced at the 19th annual TFCA Awards, a gala dinner held in Toronto at The Carlu on Tuesday, January 5, 2016. The event will once again be hosted by Cameron Bailey, artistic director of the Toronto International Film Festival.

Under the TFCA’s guidelines, contenders eligible for the awards include films released in Toronto in 2015 as well as films that qualify for the 2015 Academy Awards and have a Toronto release scheduled by the end of February 2016.