The award, which comes with a $100,000 cheque from Rogers, was presented to the filmmaker by fellow director Sarah Polley—who won the same award for her family documentary Stories We Tell five years ago. Hosted by TIFF Artistic Director Cameron Bailey and Canadian legend Mary Walsh, the ceremony took place at a gala dinner held at the historic The Carlu in downtown Toronto. Also nominated for the award were Kazik Radwanski for How Heavy This Hammer and Matt Johnson for Operation Avalanche.

Phil Lind, Vice-Chair of Rogers Communications issued this statement: “Hugh Gibson has honoured the finest traditions of Canadian documentary filmmaking. The Stairs offers a captivating, heartfelt exploration of a social issue that has never been more relevant. And most importantly, it is a glimpse into the other Toronto, a city we cherish.”

The $100,000 value of the Rogers Best Canadian Film Award makes it the richest annual film prize in Canada. As runners-up, Kazik Radwanski and Matt Johnson each received $5,000 from Rogers Communications.

“This is the fourth time in the past 11 years that our members have chosen a documentary as the Canadian film of the year,” said Brian D Johnson, outgoing President of the TFCA. “With The Stairs, Hugh Gibson has pulled off a stunning feat of vérité filmmaking—an intimate character study that illuminates issues of addiction with an empathetic, non-judgmental eye—and pulls 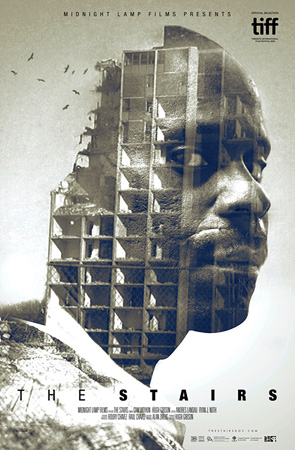 poetry out of despair.”

“As our varied slate of 2016 award winners attests,” commented incoming TFCA President Peter Howell, “movies entertain but they can also enlighten. They seek to give us a very personal truth about our world and ourselves, even if it’s just by making us laugh, cry, or ask ‘Why?’ It’s exciting to think of what the next 20 years hold for cinema and the TFCA.”

Also at the gala, actor-writer-director Don McKellar presented director Denis Villeneuve with the TFCA’s 20th Anniversary Award for Excellence, recognizing his record win of three Rogers Best Canadian Film Awards (for Polytechnique, Incendies and Enemy), and saluting “his extraordinary success in making original and powerful films within the Hollywood system without compromising his independent vision.”

Among other award-winners, American director Robert Eggers was on hand to accept the TFCA’s Best First Feature Award for The Witch, a gripping period piece that takes witch-hunting back to its Puritan roots in 17th century New England. Canadian novelist Margaret Atwood—who has two of her novels being turned into TV series this year (Alias Grace and The Handmaid’s Tale) presented the award to this Canada-U.S. co-production, which was shot in Ontario’s Algonquin Park.

As previously announced, Alanis Obomsawin is the winner of the Technicolor Clyde Gilmour Award, which was presented at the event by Jesse Wente, Director of Film Programmes, TIFF Bell Lightbox. Under the pay-it-forward terms of the award, Technicolor donated $50,000 in services to a filmmaker of Obomsawin’s choosing—filmmaker Amanda Strong, director of Four Faces of The Moon, Mia and Indigo.

Also announced, Ashley McKenzie, director of Werewolf won the Stella Artois Jay Scott Prize for an emerging artist, which was presented by Atom Egoyan. She received a cheque for $5,000 from Tamar Nersesian, Communications Manager of Labatt Breweries of Canada. Allan Macdonald, President of Canadian Tire and Canadian Tire Corp. and Retail presented a $5,000 cheque for Kristen Johnson, director of an innovative documentary memoir, Cameraperson, winner of the Canadian Tire Allan King Documentary Award. Presenters Brugel and Palmer accepted the cheque on her behalf.

Under the TFCA’s guidelines, contenders eligible for the awards included films released in Canada in 2016 plus films that qualified for the 2016 Oscars® and have Canadian distribution scheduled by the end of February 2017.

Dawn of The Driverless Car on CBC