Home News The Chair – A Review

The Chair – A Review
by Ralph Lucas – Publisher

(August 23, 2021 – Toronto, ON) It wasn’t exactly binge-watching, but I saw all 6 episodes of the Sandra Oh mini-series The Chair in 3 sessions. I was a little late in becoming aware of her. She started her career in 1993 but it was the 1998 Don McKellar feature Last Night that made me pay attention. That was the same year Northernstars went online and we’ve been paying attention ever since.

Feature films, shorts, 10 years on Grey’s Anatomy, the stunning Killing Eve and now The Chair. Created by Amanda Peet and Annie Julia Wyman, it’s billed as a comedy and it truly is funny but it’s also very serious and sometimes stays very serious when it deals with things like ageism, race, misguided humour, cancel culture and loss. 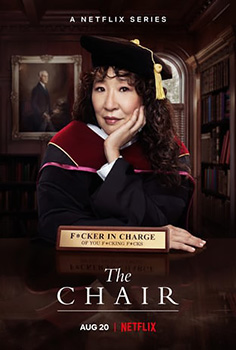 The short synopsis describes Oh’s position as “the first woman of colour to become chair of a failing English department at a major university who tries to meet the dizzying demands and high expectations of this position.” It is so much more. I didn’t put a stopwatch on the scenes but I think each episode is more or less evenly split between the demands of her job and the demands of her family and friends.

There are lots of familiar faces including Bob Balaban who plays a very senior professor who time passed by a few decades ago and David Morse who plays the Dean of the university. Jay Duplass, who has about twice as many credits as a Producer than he has as an Actor, is brilliant as the alcohol-soaked, pill-popping, recently widowed grieving Professor Bill Dobson who plays a potential love interest to Sandra Oh’s Ji-Yoon Kim. Unfortunately his various gaffes and and misguided reactions to serious situations, which provide some of the humour, become a threat to both Oh’s position and to their relationship

Excellent work from everyone. Sandra Oh has a chance to stretch a little in this role, equally portraying the frazzled mom with a demanding kid and a career woman who wishes she could focus on one thing at a time but is in the middle of a whirlwind of issues and change.

Pay attention to the very young Everly Carganilla, who plays Sandra Oh’s daughter, Ju-Hee, who everyone calls Ju-Ju. With a total of five credits on her resume, she steals every scene she is in.

The Chair is streaming on Netflix and deserves your attention. Enjoy.