The Cuban to open Canadian Film Fest
by Staff

(February 26, 2020 – Toronto, ON) March is rapidly approaching and with it a noticeable uptick in the number of Canadian film festivals including the Toronto Irish Film Festival, the Vancouver International Women in Film Festival, the Female Eye Film Festival which this year moves to the TIFF Bell Lightbox for the first time, and later in the month the 14th edition of the Canadian Film Fest (CFF), which returns to its home at Cineplex’s Scotiabank Theatre in Toronto, with 10 features, 28 shorts, and a total of 15 World Premieres.

“More than ever, we are receiving incredible submissions from diverse Canadian filmmakers that represent a unique voice,” said Bern Euler, Executive Director, Canadian Film Fest. “The Festival’s continuing dedication to equality makes this our 3rd year programming gender parity across all features and shorts. This lineup truly showcases the level of talent we have, and we are thrilled to share them on the big screen.” 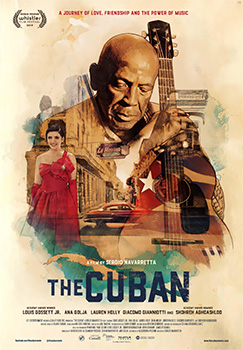 This year’s CFF opens with The Cuban from the award-winning director Sergio Navarretta. It’s a wonderfully fluid and touching story of an elder gentleman who has withdrawn into himself and his memories due in part to his diagnosis of Alzheimer’s. Played by Oscar winner Louis Gossett Jr., the film costars Ana Golja, who is most often associated with her long career in various Degrassi series. Cast members include Lauren Holly and Giacomo Gianniotti (Grey’s Anatomy).

Closing this year’s CFF will be the 2020 Slamdance Film Festival Audience Award-winner Shoot to Marry, directed by Steve Markle, a real life romantic comedy about a heartbroken filmmaker who uses documentary filmmaking as a means to meet the love of his life. The Festival will take place March 24-28, and tickets can be purchased on the festival’s website starting March 10th.

Click here for a link to the Canadian Film Fest and other March 2020 film festivals.

Canadian Film of the Day: September 13

It’s a Wrap at the Female Eye