Home News The Deeper They Bury Me in New York 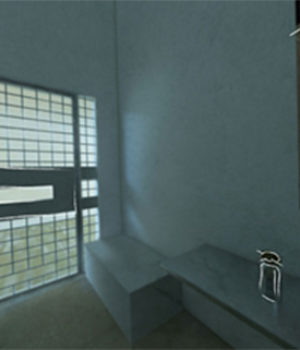 (September 25, 2015) The New York Film Festival’s Convergence 2015 conference hosts the world premiere of the National Film Board of Canada (NFB) interactive documentary The Deeper They Bury Me: A Call from Herman Wallace on September 27 with The Deeper They Bury Me LIVE, an exclusive event co-presented by social justice organization Sankofa, founded by Harry Belafonte. Co-directed by Angad Bhalla and Ted Biggs, this interactive documentary launches the same day, for audiences worldwide, at NFB.ca.

Within a window of 20 precious minutes—the time allotted for a prison call—The Deeper They Bury Me plunges users into the universe of former Black Panther activist Herman Wallace, in an interactive inside look at the system that held him in solitary confinement for most of his adult life. Wallace’s universe in Louisiana’s notorious Angola penitentiary is reimagined through the deft overlay of Wallace’s real voice with sparsely poetic animation, as visitors navigate between his six-by-nine-foot cell and the dream home he envisions with artist Jackie Sumell. After 42 years in solitary confinement, Wallace was released from prison on October 1, 2013 and died three days later of cancer, nine days shy of his 72nd birthday on October 13.

The NYFF launch features a performance by three-time NAACP Image Award winner Malik Yoba (Empire, New York Undercover), who will guide audience members through segments of The Deeper They Bury Me via an imagined phone exchange with Wallace. It will be followed by a panel discussion with leading activists and thinkers, including Belafonte, Steven Hawkins (Amnesty International USA), Thenjiwe McHarris (US Human Rights Network), Frank Greene (prison architect) and Angad Bhalla, who will discuss prison reform, combating racism, and the criminalization of dissent. Gina Belafonte, co-director of Sankofa, will moderate the discussion.

The Deeper They Bury Me is written and directed by Angad Bhalla and Ted Biggs (Storyline Entertainment), and produced by Anita Lee for the NFB. Lee approached Bhalla to develop an interactive production in parallel with his Emmy Award-winning feature documentary Herman’s House, which will also be available on VOD/DTO for Canadian viewers at NFB.ca on September 27. PBS’s documentary series POV will also stream Herman’s House for free to American viewers for 30 days, also starting September 27.

This is the second time that the NFB has been featured at Convergence, which hosted the 2013 world premiere of the NFB/The New York Times Op-Docs collaboration A Short History of the Highrise, part of the NFB’s multi-year, multi-award-winning HIGHRISE project