(June 9, 2021 – Montréal, Québec) Last year, an early casualty of the pandemic, the prestigious movie event that awards Les Prix Iris to the year’s top films, got shelved. The decision to annul the Québec Cinema Gala was “due to circumstances that make such a large-scale gathering unthinkable,” announced the Québec Cinema Foundation and Radio-Canada, which hosts and broadcasts the award show.

Normally, nominees, presenters, various industry people, and ticket-holders watch the live show in a large studio theatre. In a nearby press room, journalists follow the event on a screen, interviewing winners and taking pictures when they appear during commercial breaks. A bar stocked with sandwiches and wine fuels the bonhomie. Hugging, cheek kissing, and repartee abound.

This year, I contacted the p.r. person for the Gala to ask how we access it. No press room, she emailed, along with links to banks of photos. A colleague I copied emailed, “Open your TV.”

The stripped-down Gala’s host (pictured above), actress Geneviève Schmidt (the hit comedy Menteur, Denys Arcand’s La Chute de l’empire Americain) opened with a lot of ear-splitting guffawing and name-dropping that didn’t seem to get much of a rise out of anybody. Many of the assembled looked deadpan in reaction closeups, perhaps because of the year-long COVID shadow over the industry. Moreover, Schmidt might have been trying too hard, overcompensating in a situation where people who love proximity were removed from each other. Le Devoir’s François Lévesque called Schmidt “lively and sparkling,” but qualified that she was the victim of poor writing. Her “welcoming gags fell flat.”

In a deviation from the formula, Schmidt pre-recorded an award presentation at the Cinema Pine in the pretty Laurentian town of Saint Adele. Despite a silly gag about the theatre’s complicated voicemail messaging, the segment worked as a nostalgia moment that reminded TV viewers about melting into movies in theatres like the Pine, which is alive and in business.

Venerable stars and married couple Pierre Curzi and Marie Tifo, so irresistible in Yves Simoneau’s 1986 breakthrough picture, Pouvoir Intime, presented short film awards on the stage of the theatre. The winning “courts metrages” in 2021 were Omar Elhamy’s Écume (fiction), Éléonore Goldberg’s La saison des hibiscus (animation) and Jérémie Battaglia’s Le frère (documentary). Speaking of irresistible, the 2021 Gala was visually enlivened by the many gorgeous and talented people, male and female, in attendance. Here’s Showbizz.net’s rundown of the “12 most beautiful looks” at the Gala.

One of the “irresistibles” was this year’s “Revelation,” Kelly Depeault, the teenage lead in the year’s number one Iris winner, La déesse des mouches à feu (Goddess of the Fireflies). The striking Caroline Néron, who played the protagonist’s mother, gave a heartfelt acceptance speech for her Best Supporting Actress prize. Néro’s appearance ranked as one of the Gala highlights.

Based on Geneviève Pettersen’s novel, writer-director Barbeau-Lavalette’s movie is a super-charged depiction of wild adolescence during the 1990’s. Sixteen–year-old, angel-faced Catherine (Depeault) plunges head first into grunge era sex and drugs, ignoring the admonishments of her hippie era parents (Néron and Normand d’Amour). Vivid, trippy, at times explicitly sexual, saturated with rock ‘n’ roll, the movie captures the rituals and tragedies of teen life at a specific moment in time. The Irises cap the accolades La déesse des mouches à feu has received since its world-premiere at Berlin’s 2020 Film Festival.

“I wanted to offer a frontal point-of-view on adolescence,” Barbeau-Lavalette (The Ring, Inch‘Allah) said at the time. “I had never seen a film that looked at this transformation, this age, the way I had lived it … embracing the vertigo of that passage, along with the pain and beauty it brings.”

Observers noted that the year’s two big winners, La déesse and Souterrain are set far from Montreal, one in Chicoutimi the other in Val-d’Or. Once upon a time, many Québec films told stories about the regions, often in rural areas. Then in the 1980s, Denys Arcand’s The Decline of the American Empire signalled a focus on big city characters. For some reason, the pendulum may be swinging back just as some filmmakers are complaining that too much funding gets allotted to Montreal talent.

Souterrain plummets into the terror of a mining disaster by zeroing in on a rescue team member, Maxime (Joakim Robillard), and his Buddy Julien (Pellerin), who suffers from a brain injury. The movie tracks events leading up to the catastrophe and the frantic rescue attempts. Rather than being a conventional hero, Maxime functions on the edge of instability, and his relationship with Julien is complex.

A moviemaker fascinated by explosive male relations and violence on more than one level, Dupuis told The Hollywood Reporter, “In my real life, I’m so soft and I fear violence. I don’t want to have it around me at all. But in my writing, it’s there.” The media have noted that 2021’s top Iris winners were both individualistic women unafraid of provoking audiences. 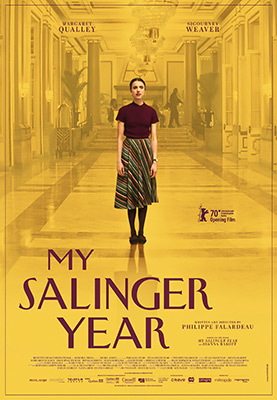 One of the highest profile Iris contenders, Oscar-nominated Philippe Falardeau’s My Salinger Year, picked up only one award of 11 Iris nominations: for Martin Léon’s music. The movie, which opened Berlin 2020, features Margaret Qualley (Manson girl Pussycat in Quentin Tarantino’s Once Upon a Time in Hollywood) and Sigourney Weaver. Qualley plays Joanna, who tries to connect with New York City’s 1990’s literary scene via a job as an assistant to mythic writer J.D. Salinger’s literary agent (Weaver).

Qualley, Andie MacDowell’s daughter, as Colm Feore somewhat awkwardly pointed out during the Gala, did not win for best actress, nor did Kiefer Sutherland’s daughter Sarah for her role in Jesse Noah Klein’s Like a House on Fire. Weaver, nominated for Best Supporting Actress, got called out in host Schmidt’s odd mélange of mocking condescension (those Americans!) and veneration for a big star.

Best actress did go to Émilie Bierre for her role in Les Nôtres, another in an ongoing spate of movies about defiant teenage girls. The top male acting award-winner, Sébastien Ricard, played a daring teacher-priest in Le club Vinland.

The big surprise of the 2021 Gala was the shutout for the excellent Nadia, Butterfly, officially selected for Cannes 2020 although not screened because the Pandemic closed down the festival. Pascal Plante, a onetime competitive swimmer, delved into the ups and downs of Olympic level competition with a story about a swimmer (two-time Olympic athlete Katerine Savard) living through a crisis of doubt about her sport. When Savard appeared to introduce a clip from Nadia Butterfly, one couldn’t help noticing arm musculature not typical of most actresses.

As for Jeff Barnaby’s Blood Quantum, the First Nations zombie picture, it won only the Best Makeup prize. The People’s Choice Iris was awarded to Félix Rose’s Les Roses (The Rose Family), the doc-maker’s film about his father, Québec Separatist Paul Rose.

The National Film Board of Canada says of its production: “In October 1970, members of the Front de libération du Québec kidnapped minister Pierre Laporte, unleashing an unprecedented crisis in Québec. Fifty years later, Félix Rose tries to understand what led his father and uncle to commit these acts.”

The kidnappers murdered Laporte, which may explain why the documentary went un-nominated. A controversy arose, and some felt the People’s Choice Iris was just restitution for the brush off.

The Québec Cinema Gala is a cultural event that opens a window into cinematic themes, tendencies, and approaches to moviemaking. It is also meant to promote the industry’s output, sell tickets, and in today’s world, multiply streams. Art and showbiz comingle, in some instances uncomfortably, but the message gets transmitted to whoever tunes into Radio Canada on Gala Night.

All photos by Eric Myre, courtesy of the Québec Cinema Gala.

Fear of Dancing a Gem