The Rowdyman
Review by Peter Bigg

There’s never going to be a Canadian film. In this sprawling, varied country there are going to be ten kinds of “Canadian” film, one for each province. Newfoundland is in the act with The Rowdyman, and from the opening moment when Will Cole (Gordon Pinsent) starts running from fat, frantic Constable Frances Williams (E.P. ‘Ted’ Henley) it is a masterful, sensitive film.

If you weren’t “going down the road” then you stay in Newfoundland, and if you are Will Cole you seduce it if it movies and drink it if it pours. (Cole seduces somebody’s wife on the train to St. John’s. When he says he can only see her in the mornings, she replies she’d take “ten minutes a day in a store window with him.) The script (also Pinsent’s) is magnificently comic in word and deed, ranging from a fight in a bakery to Cole wrapping a young cop around his little finger with confidence and wit. Pinsent has a marvelous, comic face and is playing a part he feels, written as he wanted it.

Beneath the comic surface, though, runs the line of a man losing himself, faced with others who take life seriously while he remains a rowdyman. Stan (Will Gear) dies as Will pushes his wheelchair, and a rowdyman of a previous generation is gone. Will’s friend Andrew marries, and moments after a wildly comic wedding night is killed in a piece of Will’s horseplay. Will loses Ruth, the only girl he cares for, and comes close to suicide. The film balances the 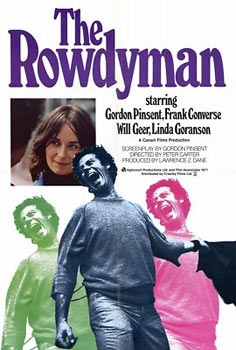 comic and the serious exquisitely in a blend which is becoming a Canadian style. It does it better than, say, Rip-Off, because the star role effectively contains both styles, and the serious moments can burst open to comedy without jarring contrast.

One could carp at several things in the film. Slushy romantic music and obvious ‘these are my thoughts’ songs cover some of the serious sections. It is probably an improvement over emotional dialogue when Pinsent’s Will would not speak, but silence would have been better. There is also an uneasy blend of smooth Hollywood-style camera-work and bouncy, grainy, handheld shots, but good editing helps to paper over this problem. And in a few crowd scenes there is a tendency for the extras to stare at the camera in a fashion which makes one conscious of the film crew behind it.

Balanced against these technical flaws is a letter-perfect set of performances. Pinsent has a star’s gifts and the film is built around him so he must be mentioned first, but it is almost unfair to do so. Linda Goranson as Ruth plays opposite Pinsent – a tough place to be in this film – and in the most awkwardly-written role. She seems to change from one scene to the next, but manages to shape the part well given the circumstances. Frank Converse as Andrew Scott, Will’s best friend, effectively captures that essence of male friendship which needs no words but functions on grunts, jokes,and punches. After these leads everyone else should be cited, for the script abounds in comic miniatures and they are all played to the hilt. My three favourite character-moments are Sabina Maydelle’s Carol Scott on her wedding night (with price-tag on peignoir), Stuart Gillard as Constable Bill giving out cigarettes, and, undeniably, E. P. Henley’s Constable Williams in his whole role.

You can’t sum up The Rowdyman. It is too rich and varied in feelings and talent. It captures Newfoundland—as Jutra shows Québec or Bogdanovich recreates Texas—with a richness of human detail. But the strength among strengths is Pinsent’s full, complex, comic and exciting Will Cole, the rowdyman. In the comedy that seems to come easily to Canadian films, one would think that we saw ourselves as a nation of jesters. The Rowdyman reminds us that behind the comedy is the ebullience of a young country capable, like Pinsent’s Will Cole, of some very serious worrying and aware that comedy reveals reality as effectively as tragedy, but differently.

Also see: The Cast & Crew of The Rowdyman.

This review originally appeared in Take One Magazine. Northernstars.ca acquired the digital archives of Take One in 2007.