(August 29, 2019 – Toronto, ON) The 44th annual Toronto International Film Festival (TIFF) kicks off in exactly 7 days and more than one of the films screening on opening day is on this, our second short list of Canadian films we think you should try to see.

TIFF’s official Opening Gala is at 6:00pm on September 5th. It’s Once Were Brothers: Robbie Robertson and The Band. You can be excused if you thought I Am Woman at 5:00pm or Rocks at 5:30PM would be the Opening Gala or any of the four other films screening a 6:00pm, but that’s just scheduling. Once Were Brothers: Robbie Robertson and The Band is the official, designated opening film and it’s a Canadian documentary about a Canadian music superstar directed by Toronto-born Daniel Roher and inspired by Robertson’s bestselling memoir Testimony.

We can’t give it Must See status because documentaries are tricky things. A documentary about global warming, or how to reduce some vital health risk is something everyone should see. A documentary set in the world of music entertainment about a specific band at a specific time is a little too narrow. But that doesn’t stop us from congratulating TIFF for giving a Canadian film Opening Gala status. Robbie Robertson’s contribution to music is huge and was partially covered in the 2017 doc, Rumble: The Indians Who Rocked The World. Once Were Brothers: Robbie Robertson and The Band enjoys 4 screenings at TIFF.
Our recommendation: Should See.
Screenings:  Thursday, September 5, 6:00pm: Princess of Wales Theatre
Thursday, September 5, 8:00pm: Roy Thomson Hall
Friday, September 6, 3:15 pm: Scotiabank Theatre
Saturday, September 14, 9:45pm: Scotiabank Theatre

Albert Shin’s feature, Clifton Hill, will have its World Premiere at TIFF on opening night. It’s one of only two screenings. This is only his third feature length film and it’s an intense and taut psychological thriller that is set in Niagara Falls and stars Tuppence Middleton. A terrific cast of Canadian actors includes David Cronenberg which, along with a great story and surprise ending helps lift Clifton Hill beyond the average thriller.
Our recommendation: Must See.
Screenings:  Thursday, September 5, 9:00pm: Ryerson Theatre
Monday, September 9, 10:00pm: Scotiabank Theatre

Aisling Chin-Yee is known as a Producer and her credits include the 2013 features Rhymes for Young Ghouls and Last Woman Standing. She makes her directorial debut with The Rest of Us as does the film’s screenwriter, Alanna Francis. So, I’m out on a limb here but based on the projects Chin-Yee has been involved with in the past, I think The Rest of Us is a safe bet. Costars Heather Graham and Sophie Nélisse lead a relatively strong cast and given today’s blended families the story line is one we can all relate to. It’s good to see new directors on their first major films.
Our recommendation: Must See.
Screenings:  Friday, September 6, 6:30pm: Winter Garden Theatre
Monday, September 9, 7:30pm: Scotiabank Theatre

When a documentary ends up in TIFF’s Masters program and the director is Alanis Obomsawin, then it unquestionably something worth seeing. This is her 53rd film (!!!) and it should not be considered casually. It’s a tough story about the death of a 5-year-old boy who spent his entire life in hospital as the federal and provincial levels of government argued over which was responsible for his care. Jordan River Anderson had a rare muscle disorder known as Carey-Fineman-Ziter syndrome. Titled Jordan River Anderson, The Messenger, this NFB production deserves to be seen by everyone. Our recommendation: Must See.
Screenings:  Tuesday, September 10, 6:00pm: Jackman Hall (Art Gallery of Ontario)
Thursday, September 12, 12:00pm: Jackman Hall (Art Gallery of Ontario)
Saturday, September 14, 6:15pm: TIFF BellLightbox

There are several NFB productions at TIFF 2019 and we’ll look at more of them tomorrow. 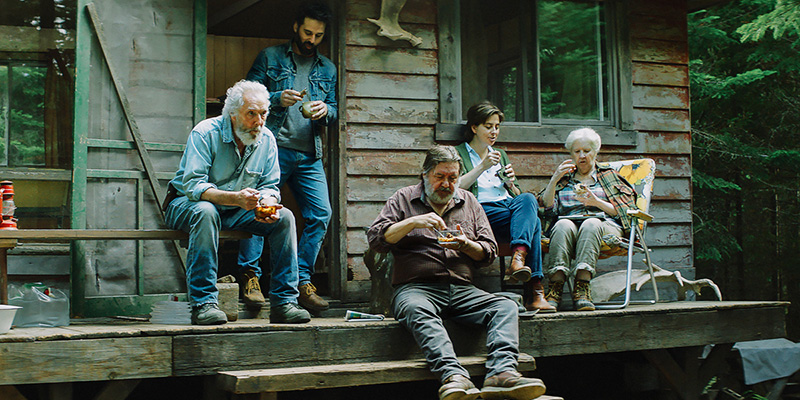 My last pick is from renowned Québec director Louise Archambault and screens in TIFF’s Contemporary World Cinema section. Remember way back once upon a time there was a back-to-the-land movement? Some of it was serious, some who tried actually made it work and some might have succeeded but not in a way we would first recognize. Her 2019 Il pleuvait des oiseaux (And the Birds Rained Down) looks at three older gentleman who at some point gave up on society and retreated into the Québec wilderness with all its isolation and stunning beauty. But the years have rolled on and now, while still holding onto their need to live independently their lives seem endangered by old age, creeping infirmity and nature itself. Costarring three of Canada’s finest actors, Rémy Girard, Gilbert Sicotte and Kenneth Welsh, this 127-minute feature is lovingly crafted by a skilled and careful director.
Our recommendation: Must See.
And the Birds Rained Down screenings:
Saturday, September 7, 4:15pm: Scotiabank Theatre
Sunday, September 8, 3:45pm: Scotiabank Theatre