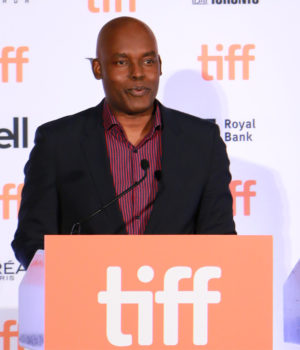 (August 3, 2016 – Toronto, ON) Celebrations for Canada’s 150th anniversary of Confederation next July are months and months away but the glow of national pride was hot at this city’s venerable and beautiful Fairmont Royal York Hotel when filmmakers, media, industry and Toronto International Film Festival (TIFF) VIPs gathered this afternoon to launch the 41st festival by announcing the Canadian films and filmmakers that will fill a major component of this year’s schedule.

It was fitting that following the rush and bother and fun of the red carpet, Cameron Bailey (pictured above) stood behind the podium and reminded the enormous crowd that the hotel stands on what once was native ground, naming the various indigenous nations that contributed to the country we called Canada and the city we call Toronto, which means a gathering place. His remarks were greeted by warm applause.

But the event was about film and filmmakers. “We are thrilled to present a robust selection of projects from some of Canada’s best filmmakers,” said Steve Gravestock, Senior Programmer, TIFF. “From thought provoking documentaries and affecting dramas, to unconventional biographies and thrillers, to animated features, this year’s selections highlight the diversity and high-calibre work produced in Canada.”

Not to be overlooked in the schedule is the list of 37 shorts including 17 films by women and 6 films by Canadian indigenous filmmakers.

“We are proud to shine a spotlight on both veteran filmmakers and emerging talent in this year’s slate,” said Magali Simard, Film Programmes Manager, TIFF. “Canadians continue to forge their own path on a global scale with their own distinct perspectives and methods of storytelling.”

Following is a list of Canadian features that will screen as Special Presentations:

Below Her Mouth – April Mullen (World Premiere)
Below Her Mouth is a bold, uninhibited drama that begins with a passionate weekend affair between two women. Dallas, a roofer, and Jasmine, a fashion editor, share a powerful and immediate connection that inevitably derails both of their lives. Starring Erika Linder, Natalie Krill, and Sebastian Pigott.

It’s Only the End of the World – Xavier Dolan (North American Premiere)
After 12 years of absence, a writer goes back to his hometown, planning on announcing his upcoming death to his family. As resentment soon rewrites the course of the afternoon, fits and feuds unfold, fuelled by loneliness and doubt, while all attempts of empathy are sabotaged by people’s incapacity to listen, and to love. Starring Vincent Cassel, Marion Cotillard, Gaspard Ulliel, Nathalie Baye, and Léa Seydoux.

Mean Dreams Nathan Morlando (North American Premiere)
Mean Dreams is a tense coming-of-age thriller about a 15-year-old boy who steals a bag of drug money and runs away with the girl he loves. While her violent and corrupt cop

father hunts them down, they embark on a journey that will change their lives forever. A potent fable at its heart, Mean Dreams fuses the desperation of life on the run with the beauty and wonder of first love. Starring TIFF Rising Star Sophie Nélisse, Josh Wiggins, Bill Paxton, and Colm Feore.

Two Lovers and a Bear – Kim Nguyen (North American Premiere)
This film is set in the Great North, near the North Pole, in a modern town where about 200 souls live precariously in minus 50 degree weather, and where roads lead to nowhere but the endless white. It is in this eerie lunar landscape that Lucy and Roman, two young tormented souls, fell in love. But now, ghosts from Lucy’s past are coming back, and she needs to run away or she will burn. Together, these lovers decide to make a leap for life, a leap for inner peace. Starring Tatiana Maslany and Dane DeHaan.

Weirdos Bruce McDonald (World Premiere)
Nova Scotia, 1976. It’s the weekend of the American Bicentennial and 15-year-old Kit is running away from home. With girlfriend Alice, Kit hitchhikes through the maritime landscape towards a new home with his mother, Laura. Along the way, Kit and Alice’s relationship is tested as Kit approaches a realization that will change his life forever. Starring Dylan Authors, Julia Sarah Stone, Molly Parker, and Allan Hawco.

Window Horses (The Poetic Persian Epiphany of Rosie Ming) Ann Marie Fleming (North American Premiere)
Window Horses is a feature-length animated film about a young Canadian poet who embarks on a whirlwind voyage of discovery — of herself, her family, love, history, and the nature of poetry. Featuring the voices of Sandra Oh, Ellen Page, Don McKellar, Nancy Kwan,

and Shohreh Aghdashloo, the film is filled with poems and histories created by a variety of artists and animators, who set out to blend a vast myriad of differences between cultures, philosophies, arts, and time frames. Window Horses is co-produced by Stickgirl Productions (Ann Marie Fleming), Sandra Oh and the NFB (Shirley Vercruysse and Michael Fukushima), and distributed in Canada by Mongrel Media.

There are two Canadian films enjoying World Premieres in the Masters Section:

Anatomy of Violence Deepa Mehta, (Canada/India World Premiere)
In 2012, a young woman was gang raped by six men inside a moving bus in New Delhi. She was beaten senseless and thrown naked out onto the street. Eleven actors collaborated on Deepa Mehta’s devastating fictional dramatization of the lives of the rapists.

We Can’t Make the Same Mistake Twice Alanis Obomsawin, (World Premiere)
In 2007, the Child and Family Caring Society of Canada and the Assembly of First Nations filed a landmark discrimination complaint against Indian Affairs and Northern Development Canada. They argued that child and family welfare services provided to First Nations children on reserves and in the Yukon were underfunded and inferior to services offered to other Canadian children. Veteran director Alanis Obomsawin’s documentary We Can’t Make the Same Mistake Twice documents this epic court challenge, giving voice to the tenacious childcare workers at its epicentre. A member of the Abenaki Nation, Alanis Obomsawin is one of Canada’s most distinguished filmmakers. For over four decades, she has directed documentaries at the NFB that chronicle the lives and concerns of First Nations people and explore issues of importance to all.

independent alternatives. Cameras follow as they uncover government and corporate secrets, just as ground-breaking and influential American journalist I.F. Stone did decades ago.

Black Code Nicholas de Pencier (World Premiere)
Based on the book by Professor Ron Deibert, Black Code is the story of how the internet is being controlled and manipulated by governments in order to censor and monitor their citizens. As they battle for control of cyberspace, ideas of citizenship, privacy, and democracy are challenged to the core.

Giants of Africa Hubert Davis, (World Premiere)
On a continent where dreams are often displaced for necessity and survival, the game of basketball brings hope to many young men in Africa. Masai Ujiri, president and general manager of the Toronto Raptors, returns to Africa each summer to stage basketball

development camps. Young men from across the continent overcome staggering odds, with an unwavering spirit, to attend these camps that are held in Nigeria, Kenya, Ghana and Rwanda. As Masai and his team of coaches work to train and inspire the raw talent that they encounter, Giants of Africa captures the amazing physical and emotional journey that these young African men pass through.

Mostly Sunny Dilip Mehta, (World Premiere)
Growing up in small-town Sarnia as the daughter of strict Sikh parents, no one anticipated Sunny Leone’s remarkable transformation into an adult film star and Penthouse cover girl — not even Sunny herself. More astonishing still, she has reinvented herself in India as a mainstream reality TV star and Bollywood actress, beloved by millions despite widespread awareness of her spicy past. Mostly Sunny asks what makes Sunny tick, and explores the birthplace of the Kama Sutra’s paradoxical relationship with sex.

The River of My Dreams Brigitte Berman, (World Premiere)
Actor-writer-director Gordon Pinsent is one of Canada’s most beloved artists. Filled with humour, passion, and

complexity, this film by Academy Award–winning filmmaker Brigitte Berman tells Gordon Pinsent’s story, as well as a universal story about the human condition, while making creative use of state-of-the art digital technology.

The Skyjacker’s Tale Jamie Kastner (World Premiere)
The Skyjacker’s Tale is a documentary thriller about Ishmael Muslim Ali (né Labeet), one of the most wanted U.S. fugitives ever, who successfully hijacked a plane to Cuba after being convicted of murdering eight people on a golf course owned by the Rockefellers.

The Stairs Hugh Gibson (World Premiere)
The Stairs tells the story of Marty, Greg, and Roxanne, each of whom survived decades of street involvement in Toronto. Using that experience, each works in public health to help their old neighbourhood, while struggling to maintain their newly-found stability. Told over five years, The Stairs defies stereotypes about drug use, sex work, and homelessness through an intimate portrait that is by turns funny, surprising, and moving.

There is far more than we can comfortably cover in one day, but with just over a month to go before the festival launches its 41st season there is plenty of time for us to research and add more Canadian filmmakers to our database. Meanwhile, more information and tickets and ticket packages are available online.