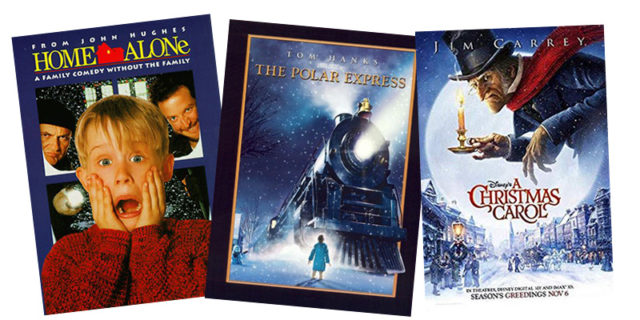 (December 20, 2021 – Toronto, ON) Should the topic of Top 10 Christmas Movies erupt in your home this holiday season, you might be able to avoid family disputes over by leaving the film choices to science this year. Crystal Ski has done the research and allowed us to share it with you. The following list, created in 2019, is based on research and how these 10 films performed at the all-important U.S. box office.

This American comedy follows eight-year-old Kevin McCallister (Macaulay Culkin) on his mission to protect his home from the burglars nicknamed the “Wet Bandits” after his family accidentally leave him home alone while they travel to Paris.  Costars included Canadian actor (and Schitt’s Creek costar) Catherine O’Hara. Home Alone made $285,7611,243 in Box Office sales and has a Rotten Tomatoes rating of 65%, which isn’t the highest of the films that placed in the top 10.

Based on Dr Seuss’ book How The Grinch Stole Christmas, this 3D adaptation shows the adventures of the Grinch as he plans to spoil Christmas for Whoville. With the help of six-year-old Cindy Lou Who, the Who’s discover the true meaning of Christmas which is far more than receiving presents. The international cast of actors providing voices includes Benedict Cumberbatch as The Grinch, Jennifer Garner as Betty Lou Who, Bill Hader as Whobris and Canadian Michael Cera providing the voice of Drew Lou Who. This version of How The Grinch Stole Christmas is the highest-grossing Dr Suess adaptation with sales that totalled $270,620,950 and a Rotten Tomatoes rating of 59%.

3. How The Grinch Stole Christmas

The second animated screenplay adaptation featuring the Grinch stars Jim Carrey. This film reveals the Grinch’s tragic past after Cindy Lou Who becomes fascinated by him after meeting him in the post office. After stealing Whoville’s presents, the Whos sing Christmas carols around the Christmas tree together. The sight of this grows the Grinch’s heart by three sizes, who later joins them in their festivities. The movie had a total box office gross of $260,044,825 and a Rotten Tomatoes rating of just 51%.

Buddy was brought up in the North Pole as an Elf after crawling into Santa’s sack as a baby. Now an adult Buddy (Will Ferrel) has to learn how to live like a New Yorker while building a relationship with his biological father. He spreads much-needed Christmas cheer to everyone he meets causing some chaos along the way.  Elf ticket sales total $173,840,591 and received a Rotten Tomatoes rating of 78%.

Based on the 1985 children’s book, this film used live-action motion capture animation that follows the story of a young boy who was beginning to doubt Santa’s existence. On Christmas Eve, he boards a train called The Polar Express towards the North Pole. Through this journey, the boy learns about the spirit of Christmas, friendship and bravery. The Polar Express made $187,224,490 in box office sales and a 56% rating on Rotten Tomatoes.

6. The Nightmare Before Christmas

Despite having recently presided over a very successful Halloween, Jack Skellington, aka the Pumpkin King, is bored with his job and feels that life in Halloweenland lacks meaning. Then he stumbles upon Christmastown and promptly decides to make the Yuletide his own. The cast of this 1993 animated feature written by Tim Burton included Catherine O’Hara providing the voices of Sally and Shock. Danny Elfman was the voice behind Jack Skellington. The Nightmare Before Christmas made $75,082,668 in box office sales and a 95% rating on Rotten Tomatoes.

When a down on his luck dad Scott (Tim Allen) accidentally kills a man in a Santa suit, him and his son are magically transported to the North Pole, where an elf explains that Scott must take Santa’s place before the next Christmas arrives. While Scott tries to ignore the whole situation, a rapidly growing belly and white beard show this certainly wasn’t just a dream. Released in 1994, Wendy Crewson played Laura Miller and Jayne Eastwood played a waitress in the movie that starred Tim Allen. The Santa Clause made $144,833,357 at the box office and scored 65% on Rotten Tomatoes.

Everyone knows that Father Christmas delivers presents to everyone on Christmas eve but nobody knows how. However, when Father Christmas’ high-tech solution fails and he misses one poor individual out, someone has to come to the rescue. They turn to Arthur (James McAvoy), Father Christmas’ youngest son, to deliver the present to this missed child before they wake up on Christmas morning. Arthur Christmas made $46,462,469 in box office sales and a 92% rating on Rotten Tomatoes.

Following on from the success of The Santa Clause, this follow-up see’s Scott (Tim Allen) face the awful news that his own son is on the naughty list! Turning his world upside down and into further chaos, Scott has to find himself a wife before Christmas Eve or he will no longer be Father Christmas. Wendy Crewson returned to play Laura Miller for the second time. The Santa Clause 2 made $139,236,327 at the box office and scored 55% on Rotten Tomatoes.

Some will argue that nothing will ever top the dramatic effect of the black and white 1951 version of this Charles Dickens classic story, which starred Alastair Sim in the role of Scrooge, but in the 2009 animated remake Scrooge is portrayed by Jim Carrey. In a remarkable feat of performance, Carrey is also the voice of Scrooge as a Teenage Boy, Scrooge as a Young Man, Scrooge as a Middle Aged Man, the Ghost of Christmas Past, the Ghost of Christmas Present and the Ghost of Christmas Yet to Come. As in all versions, the story follows the mean Scrooge as he treats those around him miserably. Until, one night he is visited by the ghost of a recently deceased friend and then the ghosts of Christmas past, present and future that endeavour to make him change his bitter “humbug” ways for good. The 2009 version of A Christmas Carol made $137,855,863 at the box office and scored 53% on Rotten Tomatoes. It should be noted that its take worldwide came to a very respectable $325,286,646.

This article was originally published on December 20, 2019, with additional information provided by Northernstars. We thank Crystalski for providing this information and the images used above.