(December 14, 2022 – Toronto, ON) If Charles Dickens was still alive today, first of all he’d be 210 years old, but if he were still here he would be very, very, very rich from the all the royalties from all the versions of the movies based on his 1843 novella, A Christmas Carol. The latest version makes our 2022 Top 5 list of Christmas films, although its theatrical release was fairly short.

Titled Spirited, it’s streaming on Apple TV+ and stars Will Farrell and the actor interested in buying the Ottawa Senators, Ryan Reynolds. Quick synopsis: Each Christmas Eve, the Ghost of Christmas Present (Will Farrell) selects one dark soul to be reformed by a visit from three spirits. But this season, he picks the wrong Scrooge, a man named Clint Briggs, played by Reynolds, who manages to flip the well-worn tale so that his ghostly visitor must reexamine his own past, present and future. 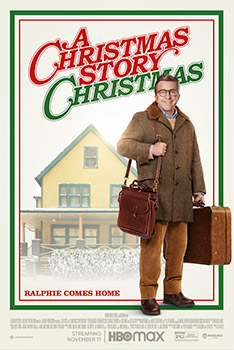 One of the most enduring Christmas films is the 1983 classic A Christmas Story. Look carefully and you may find it screening in a theatre near you. We have two versions of the poster and a set of 8 lobby cards for the film in our Northernstars Collection. HBO Max debuted A Christmas Story Christmas (aka A Christmas Story 3) on November 17. Many of the younger cast members from the original film reprise their roles now all grown up and we get to see Ralphie return to his former home in Indiana, where his mother convinces him to rekindle a magical Christmas of old. Look for returning cast members Ian Petrella, Zack Ward, Scott Schwartz, and R.D. Robb. A Christmas Story Christmas plays this coming Saturday on HBO 1, one of the channels served up by CRAVE.

Still want to see the original? Check to see if your cable provider carries TBS. Once again this year, beginning on December 24, Turner Broadcasting will run the movie in a marathon of repeats from Saturday, December 24 at 8:00 p.m. to Sunday, December 25 at 8:00 p.m. EST.

Fifth on the list is something you might miss because of its title. It doesn’t mention Christmas. Roald Dahl’s Matilda the Musical, based on Tim Minchin’s hit stage musical, stars Emma Thompson as an evil headmistress but it is Alisha Weir you’ve got to see. If Christmas calls for a heart-warming tale, then this qualifies as the young girl Alisha plays uses her magical imagination to outwit Thompson’s character. Released theatrically for a limited run on December 9th, it debuts on Netflix on Christmas day.

Not on the list, I thought I should add this 6th title recognizing some of our readers might be looking for something far more edgier. You might want to try Violent Night, an obvious play on Silent Night. It even has a character named Scrooge, played by John Legizamo. David Harbour dons the Santa suit but his mission to deliver toys is interrupted. When mercenaries attack a wealthy family and scare Santa’s reindeer, St. Nick becomes anything but jolly. Its release date was December 2.

I hope you liked my pick of these Christmas movies, but I am sure you have your own favourites too. Have a safe and Merry Christmas from everyone at Northernstars.ca