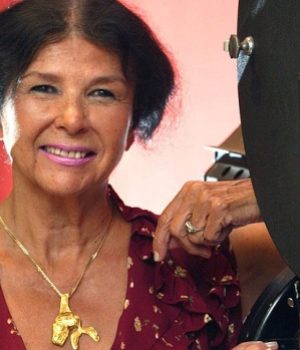 (November 23, 2016 – Toronto, ON) The Toronto Film Critics Association has announced that director Alanis Obomsawin is the recipient of this year’s Technicolor Clyde Gilmour Award. The award, now celebrating its 20th anniversary, recognizes a Canadian industry figure who has made a substantial and outstanding contribution to the advancement and/or history of Canadian cinema. This includes, but is not limited to writers, directors, producers, distributors, actors, academics, cinematographers and technicians. In the spirit of the pay-it-forward nature of the award, the recipient names an emerging filmmaker to receive $50,000 in services from Technicolor Creative Services.

“I’m deeply touched by this recognition from the Toronto Film Critics Association,” said Obomsawin. “But what’s most special for me is the opportunity you are offering me to help a young filmmaker with $50,000 in services. I think that’s a truly wonderful idea! Thank you to the TFCA and Technicolor for this award and for allowing me to assist a fellow artist – something that is very near and dear to my heart.”

“We are thrilled to present this award to such a significant architect of Canadian cinema and culture,” said TFCA President Brian D. Johnson. “After Norman Jewison and Deepa Mehta, Alanis Obomsawin is only the third filmmaker to receive the Gilmour, which often goes to those working behind the scenes. As a performer, storyteller, activist, administrator,

writer, producer and director, she’s been a pioneering force who has enriched the scene from conceivable angle, while creating a lifetime of movies that matter. This honour is long overdue.”

Alanis Obomsawin is the world’s most honoured Indigenous filmmaker. An officer of the Order of Canada and twice a Governor General’s Award winner, the Abenaki director, writer and singer has won the Pioneer Prize from the U.S.-based International Documentary Association, the Outstanding Achievement Award from Toronto’s Hot Docs festival, the Lifetime Achievement Award from Chile’s Valdiva Festival and been named a Grand Officiere de l’Ordre national du Québec. She has worked with the National Film Board since 1971. Over her career, she has made over 45 films, the vast majority of which are point-of-view documentaries that represent Indigenous peoples: their history, politics and singular lives. Her signature work—and the one where she took the most personal risks–remains Kanehsatake: 270 Years of Resistance, the definitive work on the 1990 Mohawk uprising in Oka, which garnered 18 prizes in Canada and abroad including the TIFF Canadian feature award. Her most recent film is the 2016 documentary We Can’t Make the Same Mistake Twice. Alanis Obomsawin is a charismatic, articulate advocate for Indigenous communities throughout North America.

The Toronto Film Critics Association will announce the bulk of its 2016 awards on December 11, 2016, including the Stella Artois Jay Scott Prize for an emerging artist which carries a $5,000 cash prize. The TFCA will also name the three finalists for the coveted Rogers Best Canadian Film Award, by far Canada’s richest film prize at $100,000 with $5,000 going to each of two runners-up.

The winner will be announced at the 20th annual TFCA Awards, a gala dinner held in Toronto at The Carlu on Tuesday, January 10, 2017. The event will be co-hosted by Cameron Bailey, artistic director of the Toronto International Film Festival and actress extraordinaire Mary Walsh.