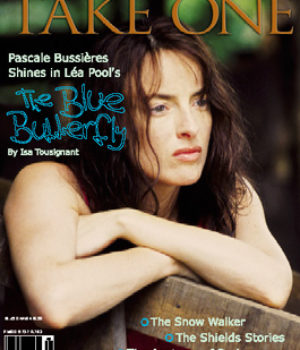 “I love the human impulse to be outrageous. It’s the middle finger raised to the people who have power over us. That’s what this film is about.” – Lindalee Tracey, director, The Anatomy of Burlesque

An ex-burlesquer herself, filmmaker Lindalee Tracey sashays us along with a lot of other bodies through a danse de ventre into the extraordinary arena of burlesque and its major movers and shakers in her latest documentary, The Anatomy of Burlesque. Tracey is a long way from the dark territory she travelled in her very personal, confessional film Abbey, I Hardly Knew Ya (1995), in which Tracey led us into a downward spiral along skid row in a desperate search for information about her deceased father, an alcoholic who abandoned her as an infant.

Meticulously researched, the film is a romp through the history of burlesque, narrated by those who practiced the form. The film combines the scholarly with the vernacular, mapping out the written and performed rites of burlesque; its high and low forms; its social meaning and physical components. It pays tribute to the icons of the genre, including Mae West, Charles Chaplin, Mata Hari, the French cancan, Lili St. Cyr, the Minsky brothers and Florenz Ziegfield. Although The Anatomy of Burlesque is an historical documentary chronicling the development and impact of burlesque on Western culture, the film still feels personal. This might be because for Tracey, it is personal. Burlesque is part of her soul, a soul that believes in the healing power of belly laughs and fart jokes. This is what essentially sets this film apart from most other historical documentaries. It’s funny, it’s smart, it’s endearing and it’s a little sassy too, a lot like Lindalee Tracey herself.

What inspired you to, in the words of Jonathan Miller, “unearth it all”?

It was the perfect intersection of where all the things that matter to me live. You know, in the land of burlesque. We’ve got to get over our uptightness. What I wanted was something joyous, smart and encompassing the high and 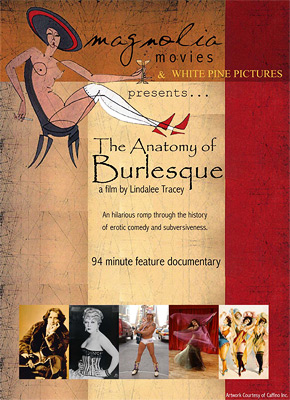 the low. Boobs have been around forever. Potty humour has been around forever. And smart broads have been around forever. I wanted to put it all together and really enjoy the stew, so that’s what I did. [Burlesque] was vulgar intentionally. It wasn’t vulgar from lack of intelligence. It was a statement. I mean, who knew that the French Cancan had revolutionary roots, and the dance is coded, physically coded? It’s a language. It’s a grammar among a group of people who say, “Fuck the cops, fuck the military, fuck the King!” I mean, it was incredible defiant but coded so the dancers wouldn’t all end up in the Bastille. The Cancan is entertainment, but behind the entertainment is a much deeper and smarter meaning.

You mention in the film that you have a background in burlesque. How did you become a burlesque entertainer and how long were you on stage?

It was something I did for a few years a long time ago and made great deal of money. I was truly a burlesquer at time when it was becoming much more about anatomy, and very little about burlesque. And so I was in that last little glow, that last hurrah when the big shows were still around and one could do comedy banter on stage. Then we all got pushed off the stage because of the incursions and assaults of pornography, and everything got reduced to body parts. Before that, one couldn’t appear completely naked, so one had to resort to all kinds of imaginative and funny ways of keeping the audience engaged. It was a brilliant time. I wasn’t really a stripper. I was always more of a burlesquer.

Although the film is fun and playful at times, it also tackles some very serious issues, mainly that of social inequalities and injustices, not unlike John Gay’s 18th century The Beggar’s Opera, with its outrageousness and seeming vulgarity. How did you create the balance between the ludicrous and the serious?

It had a lot to with the casting of the film’s subjects. It took a long time to get just the right group of people together because I really wanted to create a Greek chorus that had hinges, a Greek chorus that could laugh when laughter was necessary and who could reflect and guide when that was necessary. The notion was to create characters. We get a little bit into their lives, we get a sense of what they’re doing and how they’re connected to others, and every so often I break the rhythm and go back to theGreek chorus. So the casting was critical and took quite a long time to assemble. There are great 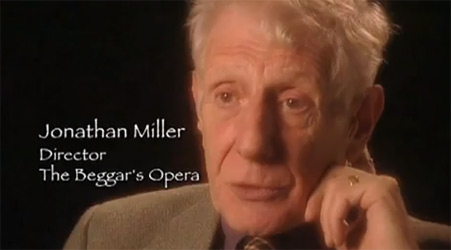 number of people out there who have all kinds of knowledge about burlesque, but not so many who have a bigger fluidity, a bigger range. Luckily enough we were able to assemble some pretty smart, interesting people who were also characters. If I’m proud of anything in my life, besides a good marriage [Tracey’s husband is the noted documentary producer Peter Raymont] and my sweet boy, it’s casting Jonathan Miller [co=founder of Beyond the Fringe]. He really understood what I was trying to do with the film.

There seemed be such a wealth of information and archival material available on burlesque, which could be both a blessing and a curse. Can you talk about your approach to structuring and organizing the material?

It was a challenge. It was so important that the film was about connection and interconnection. One of things was to figure out what the different eras were, and who best personified those eras and was there visual material for them. The whole idea was that I was creating a burlesque of burlesque. I send up a great deal of forms, including the documentary form and took out the earnestness. Part of it for me was trying to get a form that would work. To me, it’s like a middle way. I was hoping to create visually a sense of a middle way. Creating that “midway” took a lot of thought before committing camera to anything. It took over a year–and–a–half of research and scriptwriting.

You mention you were sending up the form of documentary. You do seem to be having a lot of fun with the traditions of historical documentary.

You could turn burlesque into something particularly dull if you have a mind to. I didn’t. (laughs) I set it up so my own humour would come through, and that was part of the deal. It was a little frightening because when you talk to a broadcaster or to Telefilm and tell them it’s supposed to be funny, they kind of look at you like “it better be really freakin’ funny.” Believe me, humour keeps people in the tent. They love it. This is not to say I’m always going to be a funny documentary filmmaker, but the material lent itself to that and I wanted to tackle it.

You tackle it with quite a few humourous devices, such as the little cartoon bubbles. Very cheeky.

I put those in at the end. I thought, “should I or shouldn’t I?” And then I thought, “Hell, I’m going to! I’m going to go whole hog.” I like playing with people without mocking them, without putting them down. We live in very cynical times, very judgmental and pragmatic times, and it’s very difficult to have humour that it isn’t terrifically ironic or hurtful. I really had to be careful about the tone that I struck, and especially with 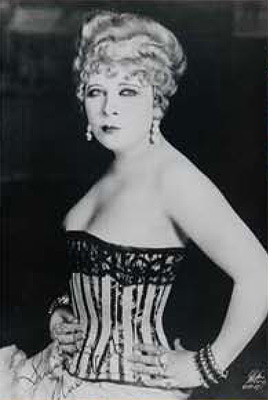 someone like Dixie Evans, the former Minskygirl. You know there’s so many ways you can hurt that person. She’s older, she’s not on top of her game as she was 30 years ago, and yet she’s such a delight. Her spirit just soars above all of that body stuff. And I wanted to make sure that the humour that came out of her and around her was really respectful but saucy. And it worked. The tone that she offered was a tone that we’d struck. We wanted her in the film because of who she was, not to mock her. In a way burlesque has given women like Dixie, women like me, women like Mae West a platform where we can live and be bigger than life and be ourselves and play, have fun. And so it’s very much in the spirit of burlesque that we honour these women, and keep honouring them.

Was this related to your choice to be a cabaret–style–emcee–cum–on–camera narrator?

What I didn’t want was the focus to be on me. “It’s the Lindalee show!” And I wasn’t convinced I could do it really well. I had been really sick beforehand. I had a whole year of breast cancer. So, I didn’t know if I could do this on top of everything else, having just recovered from chemotherapy six months earlier. Then I just thought, “okay, I’m doing it!” I had the bona fides, but I also thought that would be distracting. If you set yourself up as the guide who really knows the work, then the audience may come to rely on you too much and not appreciate the craft and the treasures that are being laid before them. So I made my appearances in the film as spare as I could. There were a lot of places where I could have done more, but I purposely tried to sit back and let other people take over. Not easy for an Irish gal!

If there were one thing you want audiences to walk away from The Anatomy of Burlesque with, what would that be?

Just the joy. Just the absolute joy of being alive. As Jonathan Miller says at one point, “being embodied.” I want people to be excited about being alive and laughing. Tell a few fart jokes to people you don’t know on the bus. And laugh. For God’s sake, enjoy it. I just find this material very, very rich. I just want it to get out there in the world and for people to say, “Oh my God, we lost out sense of humour, let’s get it back, let’s insist on it. Put it back in the constitution!” So when you’re feeling squished, remember there’s a way to feel unsquished. Humour is there as a weapon of first choice.

The last image in the film is a wide shot of Dixie Evans, decked out in all her scarlet red feathered finery. She turns from the camera and like a queen, passes underneath her Exotic Dance Museum sign, promenading toward a desert–drenched horizon, and then like a phantom, disappears amid the sand and the sequins. Is Dixie’s little dance the swan song for burlesque?

The beauty of burlesque is that it does survive youth going way into middle and old age. Where Dixie goes we shall follow, if we’re lucky.

This article was originally published in Take One Magazine, Issue 45 in March of 2004. Northernstars.ca acquired the digital archives of Take One in 2007.