(April 4, 2018 – Toronto, ON) Regular readers know that with our main focus being Canadian film and television, we rarely pay attention to events south of the border or elsewhere. That doesn’t mean we ignore those areas, just that there’s little news that fits within our rather strict parameters. That said, we couldn’t help but notice an item from Colorado’s Vail Film Festival.

Yesterday organizers announced that the festival will honour Aya Cash with its 2018 Excellence in Acting award for her incredible work in the Canadian film Mary Goes Round and for her varied and nuanced performances in both film and television.

In 2015, Cash, who was born in San Francisco, received a Critics’ Choice Television Award nomination for Best 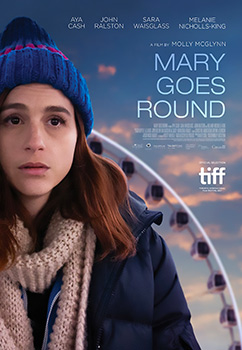 Actress in a Comedy Series for her lead role in the FX/FXX series You’re the Worst. Other credits include Brotherhood, Law & Order, Mercy, and The Newsroom. Cash was also a series regular in the 2011 Fox comedy Traffic Light.

In Mary Goes Round, written and directed by Molly McGlynn, Aya plays Mary, a substance abuse counselor who gets arrested for a DUI. She returns to her hometown of Niagara Falls and learns that her estranged father is dying of cancer. He wants her to form a bond with her teenaged half-sister that she’s never met.

“We’re excited to screen the Colorado Premiere of Mary Goes Round and to honor Aya Cash,” said Festival Director, Corinne Hara , “Our programming team fell in love with her honest, raw and heartfelt performance. Aya’s ability to make you laugh and cry in the same breath is a testament to her talent and dedication to her craft.”

Mary Goes Round is scheduled to screen at the festival this Friday, April 6 at 8:30pm. The Excellence in Acting award will be presented and on-stage followed by an interview with Aya Cash on Saturday, April 7 at 7:45pm. For more information about the 15th annual Vail Film Festival, click here.