(October 13, 2021 – Vancouver, BC) The Vancouver Film School (VFS) and its Creative Ambassador Kevin Smith have announced the 2021 Kevin Smith Ambassador Scholarship. Eligible students who demonstrate the most-promising creative potential will be awarded with full or partial tuition to study at Canada’s premier entertainment-arts centre in Vancouver. This scholarship marks Kevin Smith’s final act as VFS’s Creative Ambassador and was announced at the VFS Storyteller’s Studio AMA event in September 2021 titled “Just F#@king Create”.

The following will be awarded:

The Kevin Smith Ambassador scholarship, valued at up to $500,000, was developed to give students with a passion for the creative media arts to follow in Smith’s footsteps and pursue their passion at VFS. A VFS alum of the Film Production program, Kevin Smith has since received worldwide acclaim for his brilliant stories, intricate characters, and incisive dialogue in such films as Clerks, The Jay and Silent Bob franchise and more. 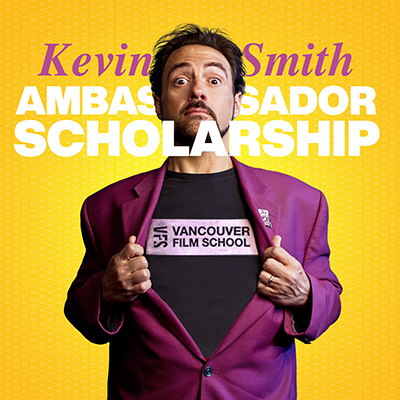 Applications are currently being accepted, and the deadline to apply is November 1 at 12:01 a.m. PDT. Winners will be announced by the end of November. Click here to apply or for more information about the 2021 Kevin Smith Ambassador Scholarship.