Violation at PNP
by Staff

(January 13, 2021 – Toronto, ON) Pacific Northwest Pictures has acquired the Canadian rights to the drama/horror festival breakout Violation from filmmakers Madeleine Sims-Fewer and Dusty Mancinelli. Violation is the debut feature from the duo who wrote, produced and directed the film in which Sims-Fewer also stars. Following its World Premiere at the Toronto International Film Festival, where Madeleine Sims-Fewer was given the TIFF Rising Star Award, it screened at the Vancouver International Film Festival, where it was given the Emerging Canadian Director Award; the Calgary International Film Festival, where it was given the Emerging Canadian Artist Award, then the Montréal Festival of New Cinema, Saskatoon Fantastic Film Festival and will play at Sundance later this month. It was also nominated for the Directors Guild of Canada Discovery Award. PNP will release Violation across Canada on March 26, 2021. 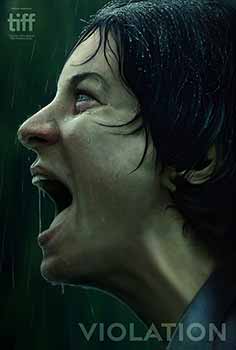 “We are excited to bring Violation to Canadian audiences,” said Sardé Hardie, Vice President of Acquisitions and Sales at PNP. “Dusty and Madeleine have not only created a beautiful exhilarating film, but one that opens up important and much needed dialogue. That combination is when cinema is at its very best.”

“We are absolutely overjoyed to be working with PNP on the Canadian release of Violation,” said Madeleine Sims-Fewer and Dusty Mancinelli. “Their passion for our film has been inspiring, and we couldn’t imagine a better team to bring it to audiences in our home country.”

The film is a bone chilling portrait of trust, loyalty, and sibling rivalry. It pulls the audience through a dark portal into a PTSD memory smash and untangles a sticky web of trauma and resentment. Sims-Fewer plays a troubled woman on the edge of divorce who returns home to her younger sister after years apart. But when her sister and brother-in-law betray her trust, she embarks on a vicious crusade of revenge. Combining lush aesthetics and heartbreaking violence, Violation is a turbulent, dreamy, feminist revenge fable that creates an intimate cataclysm of bloody and inevitable retribution. Volition also stars Anna Maguire (The Hummingbird Project), Jesse LaVercombe (Murdoch Mysteries), Obi Abili (21 Bridges), Jasmin Geljo (Schitt’s Creek), and Cynthia Ashperger (Orphan Black).

Also see: The cast and crew of Violation.