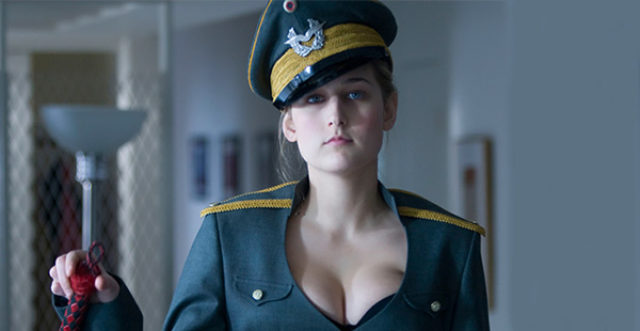 (Toronto, Ontario – December 12, 2007) — Robert Cuffley’s new film, Walk All Over Me opened on December 7th. The film begins late one night at a roadside convenience store where a young woman named Alberta (Leelee Sobieski) escapes an abusive relationship by hiding on a bus and taking it to wherever it is going. The destination turns out to be Vancouver, where Alberta only knows one person – Celene (Tricia Helfer), a woman who used to babysit her when she was younger. Although Celene is not overjoyed to have Alberta unexpectedly drop in on her, she agrees to let her stay. She lands a job at a local supermarket, but it pays nowhere what Celene makes as a full-time dominatrix – three hundred dollars an hour. Thinking it could be a way she can make some fast cash, she selects a potential client only to find out he is being pursued by three very bad men who will stop at nothing to retrieve a large sum of their money they believe he has stolen. Alberta suddenly finds herself both in the middle and in the way.

Robert Cuffley directed the film and co-wrote the screenplay with Jason Long. He talked with Northernstars founder and publisher Ralph Lucas about his second feature.

NS – How long did it take to go from first idea to finished film?

RC – Three years, which is not abnormal. I was sitting in a coffee shop, and the film`s original title was Alberta Bound, and I had that title on the tip of my tongue when I thought what if Alberta was not a place but a women who stumbled into the world of S&M? I said that to Jason Long and he said, “That`s really funny.” About two weeks later I went back to him and said that we should think about it as a concept and he agreed, saying “It`s kind of cool.” So I went away and wrote a draft and it was a love story. I showed it Jason and he thought it was good but said that it 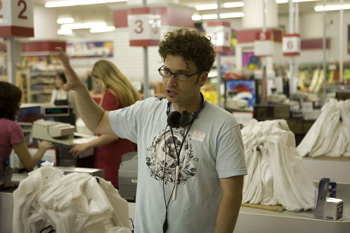 needed somesort of dark antagonism somewhere in it. I asked what he had in mind and he said “Well, some crooks,” and that became the beginning of about 12 drafts. From that point on it was just tweaking but in all it was a three year process.

NS – This is your third film with Jason Long?

RC – Yes. And we’re doing the next one too. So it’s obviously a relationship that`s working very well.

NS – Sort of a Lennon-McCartney thing?

RC – I think so. We finish each other’s sentences and I can go somewhere with an idea and he kind of understands me in shorthand and vice versa. Most of it comes down to tone, which was the hardest part of this film. Both for directing the actors and for maneuvering between the thriller aspects and the comedic aspects. I found that a very precarious balance.

RC – Sure. I love talking about that. Because what happened was I made the movie and the distributors were saying, Okay, what is it? And everyone throws their two cents in and we heard all of those that you said We also heard crime thriller, comic noir, which I actually really like. That`s what the Toronto Film Festival called it by the way. We heard black comedy, comedic thriller, and I don’t think of any of those but at the same time it`s all of them. I was thinking of this 1986 Jonathan Demme movie called Something Wild. I really liked it. It’s a comedy but it starts as one thing and then it gets a little bit darker in act three – darker than Walk All Over Me – and I really liked that. And people who read the early versions of the script said that you can’t do that. That you can’t start as one thing and become another. And I wanted to know why not? Why can’t you? And now, I hear feedback from people who have seen it and 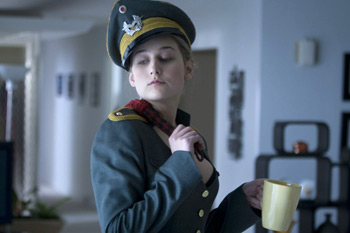 they’re responding positively to that. But I understand. From a Rogers Video perspective, what shelf does it go on? And I think, thriller-classic-Canadian-comedy-alternative-romance. I understand that I have to categorize my next film better but I don’t regret it. I think it’s one of the film’s strengths.

RC – It was a very long process. But the important thing about Leelee is that she is into the independent filmmaking spirit. She’s not a “talk to me about the paycheck” kind of actor. She didn’t know the film`s budget when I went to meet her in LA She didn’t even know that I was Canadian. I just met her for lunch and we talked and about an hour later she said, “Oh, you came all the way down from Canada.” She didn’t know any of that. She was just using her gut to make the decision on the script as opposed to what was in it for her. It`s nice to have someone make a decision on something other than money.

NS – Your cinematographer, Norayr Kasper, did a wonderful job. How much influence did he have on some of the shots, or the look of the film?

RC – You’re one of the few people to pick up on that. I can’t speak highly enough about him. I learned so much. This is my second feature, but he’s an artist. The things he does with light were just spectacular. All of the actors were aware of it. He would take longer than I would normally want in a lot of cases but then I would see the result. Stunning. And he knows how to light women. Leelee and Tricia look terrific. He understands that this isn’t a TV movie. This is cinema. We shot on film and I’m just so happy with how it looks. It`s beautiful. It`s sculpted. It doesn’t look like TV it looks like a movie.

NS – What is it like for you to go through all of this. Three years of work. Twelve drafts of the screenplay. The obvious care and quality of the work from the cast and crew and then, it opens, plays for a week, maybe two, and then it`s gone. What is that like?

RC – It’s heartbreaking. That’s what happened with my first film, Turning Paige. I won best emerging Canadian director with that film, we won best screenplay, we were up for four Genie Awards and no one saw it. And it was heartbreaking. And that film took four years. Part of that I carried with me in the conceptualization of this film as well as the casting. But we’re lucky on this film. We made a very big sale earlier this year at the Toronto Film Festival to the Weinstein Company. So they own it for the US and that puts the film in a different hemisphere for us. But I’m Canadian. I want to succeed here. And I want people to see this film on the big screen. That’s where it`s going to look proper. That`s where it’s going to have the most impact. We’ve sold the US. We’ve sold Russia. We’ve sold India. We’ve sold Australia. And every week we’re selling more territories. But the US is the big one and my next film should be easier to get off the ground.

NS – Thanks for talking to us.

Also see: The Cast & Crew of Walk All Over Me.