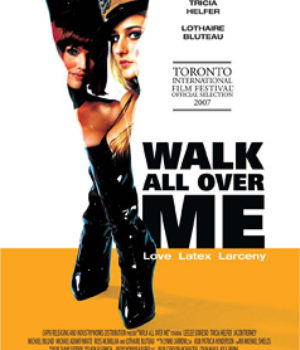 Walk All Over Me
Review by Paul Townend 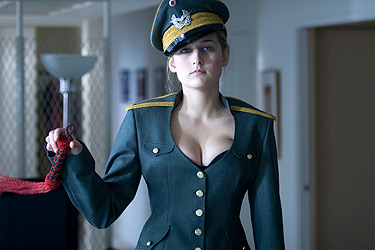 Walk All Over Me is a classic example of a film that`s interesting for the first 45 minutes, but falls apart after that. Many scenes in the middle with the hoods, apart from being very violent, don’t amount to much or tell us anything about the two ladies, and the resolution, when it finally comes, amounts to very little. Director Robert Cuffley has some stylish flourishes, with lots of overhead shots, that presumably come from his background as a music video director, but he is let down by his own script, which is an unsettling mixture of kinky sex (which is never fully explored), offbeat humour, and low-rent crime melodrama.

He is also let down by his leading ladies, who look great in tight bodices and push-up bras but have limited acting abilities. Lothaire Bluteau gives a creditable, creepy performance as a violence-loving gangster who has his own needs to dominate his two idiot accomplices, nicely played by Michael Eklund and Michael Adamthewaite, who provide much of the humour.

Walk All Over Me was picked up Harvey Weinstein for distribution after it was screened at the Toronto and Calgary film festivals earlier this year, and will certainly do better than Cuffley’s debut feature from 2002, the dreary melodrama Turning Paige. If he keeps at it, he possibly has a career in the movies, but he would be better severed by a more accomplished screenwriter than himself.

Also see: The Cast & Crew of Walk All Over Me.