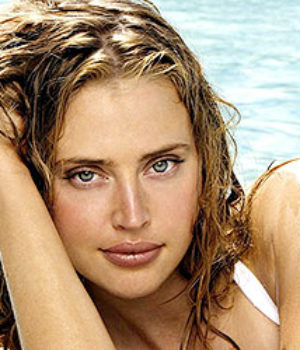 Estella Warren is perhaps best known for her Chanel No.5 perfume ads, and her high-profile roles in the racing movie Driven and Tim Burton’s remake of Planet of the Apes. But had a talent scout not spotted her modelling in a high school fashion show, she may have been a star in a very different field.

Estella Warren was born on December 23 1978 in Peterborough, Ontario, to a used-car salesman and a school principal mother. As a young girl, she showed a natural predilection towards being in the water, and for 10 years she trained as a synchronized swimmer.

At 12 years old, she moved from Peterborough to Toronto to train with Canada’s National Synchronized Swim Team. During the next five years, she was named National Champion three times, and represented Canada at the World Aquatic Championships, where she placed 2nd.

In 1996, Warren was training for the summer Olympics in Atlanta, when she participated in a high school charity fashion show. A talent scout 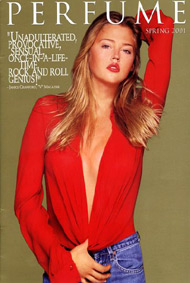 sent a Polaroid of her to an agency in New York, and soon she was in demand as a model. She decided to leave her aquatic career behind and focus on modelling and acting.

Soon, Warren was posing for legendary photographer Ellen von Unwerth and appearing in Italian Vogue. She moved to New York City, and her father became her manager. Her modelling career developed rapidly after that, and she became a much sought-after print and runway model. She appeared on the covers of French and Spanish Marie Claire, German, Spanish, French and Italian Vogue, German GQ, in the 2000 Sports Illustrated swimsuit issue and a number of Victoria`s Secret catalogues. Online photos of Warren soon became popular download subjects, and she was chosen as the face of the classic fragrance Chanel No.5.

In the tradition of models entering the world of films, her first film role was playing a model in Perfume (2001), which was set in the world of high fashion.

Warren`s next role was in the Sylvester Stallone/Renny Harlin film Driven (2001), in which she played one of the purely photogenic love interest roles. Critics who commented on her performance focused more on her physical attributes than her acting ability.

Her next film was the director Tim Burton’s remake of the 1968 sci-fi classic Planet of the Apes (2001). Unfortunately, her performance in that film, as well as Driven, earned her a Worst Actress Award at the notorious Razzie Awards.

However, while Planet of the Apes received mainly poor reviews, it was better than her next two films, the straight-to-video Tangled (2001) and the mindless comedy Kangaroo Jack (2003).

Her next film was The Cooler (2003), co-starring William H. Macy and Alec Baldwin, which appeared at the Sundance Film Festival as well as the Toronto International Film Festival. Warren appeared in the horror film Trespassing (2003), from rising indie director James Merendino.

In 2003 the Canadian real-life drama I Accuse was released, in which she co-starred opposite Scottish actor, John Hannah. The following year brought the thriller Pursued, with Gil Bellows and Christian Slater, the action-adventure Nomad: The Two Worlds, and the romantic comedy In Your Dreams. She was on the big screen or on TV in at least one production every year from 2003 to 2010.

In the years since Estella Warren decided to forgo her athletic career to pursue acting and modelling, she’s made a substantial impression both in Hollywood and in the world of high fashion and continues to be active in both.

This biography is Copyright © 2003 by Catherine Solmes and may not be reproduced without written permisson. Click here for more information about copyright.